It wasn’t supposed to be this way.

The Trump administration and Congressional Republicans swore up, down and sideways that the tax cuts were going to produce wage increases, investment and jobs.

So far just 6% of the tax cut windfall has gone to pay hikes, almost all in the form of heavily-publicized one-off bonuses.

By contrast, announced stock buybacks exceed worker bonuses and raises by a factor of 63.

Stock buybacks are not a good thing. They distort the stock market. They encourage financial shenanigans and discourage investment. They weaken the economy.

Now this once-illegal activity is the single largest short-term driver of the stock market … a trap waiting for you.

There’s a strong argument that the recent performance of the post-2009 bull market has been based primarily on share buybacks, in two ways.

In this way, companies can appear more profitable even if their actual profits aren’t growing. More than 40% of total EPS growth between 2009 and mid-2017 was based solely on share repurchases and dividends: 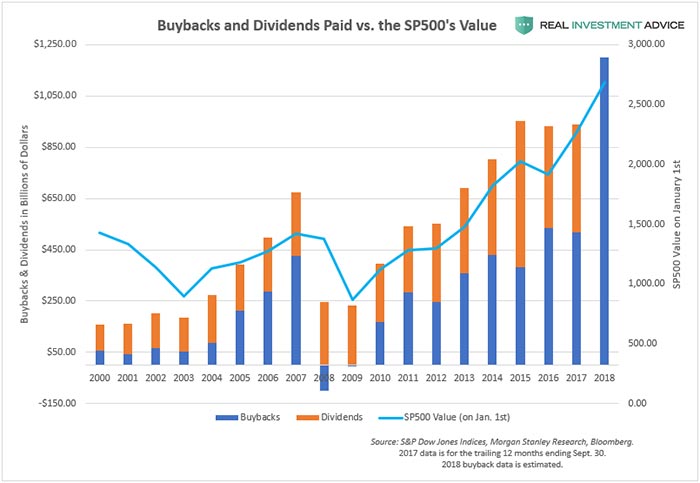 Corporations are large, price-insensitive buyers. They’re always ready to purchase their own shares whenever they weaken a bit. That in turn insulates the market against drops. That creates lower volatility and lower liquidity, which in turn incentivizes more share buybacks.

Lower volatility leads retail investors and algorithmic trading systems to think stocks are safer than they are. Everyone piles into stocks, which lowers volatility further, until there’s a big blow-off … as in February.

That Big Sucking Sound You Hear

Over the past decade, U.S. companies have increased buybacks to the point where they are now collectively the largest single buyer of stocks.

The sellers of those stocks have been individual households and institutions like pension funds, insurance companies and charitable trusts:

The result is a massive transfer of wealth from households to corporations. Returns that used to go to individual and institutional investors are now being swallowed up by corporations.

As a result, corporations now hold more than one-third of cash in the U.S. economy — $1.5 trillion. And their pile is growing fast: 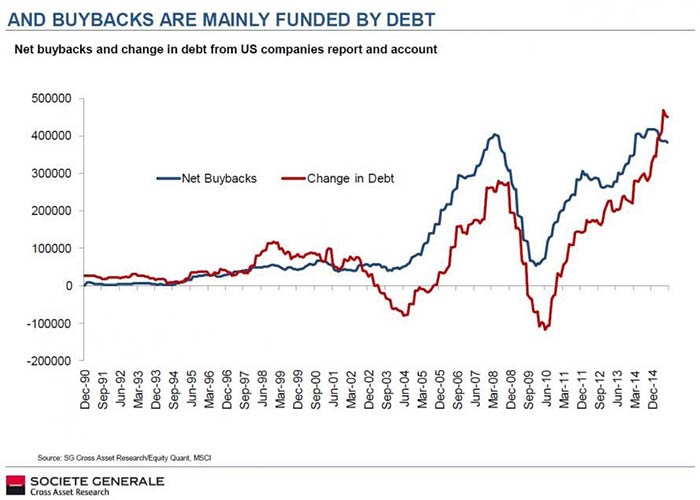 In other words, despite having piles of cash, U.S. corporations are actually borrowing money to buy back their own shares.

And why not, when the margin between the cost of borrowing and share price manipulation is so huge?

There’s no mystery in this: Share buybacks are ridiculously profitable. Just look at the returns to share price and dividend manipulation compared to investment in job-creating capital, or even merger-and-acquisition activity:

Who benefits from those returns? Mainly corporate executives. After all, the value of their stock options goes up with their company’s share price. It makes their decision to buy back shares a no-brainer.

The Trump Administration and Congressional Republicans Hope You Won’t Notice

Just after the tax bill passed, retail giant Walmart announced it was granting a $1,000 bonus to celebrate. It soon emerged that employees were eligible only if they’ve worked in the company for 20 years. That ruled out nearly all shop-level workers … those who need it most.

Here’s something else: The total value of Walmart’s bonuses was $400 million. The value of the tax cut to the corporation will be $18 billion. So only 2% percent of its tax cut is going to its (best-off) workers.

Stock buybacks have helped to concentrate income and wealth among the richest U.S. households. After all, the top 10% of households own 86% of all stocks. Buybacks appear to have little to no impact on real investment or job creation.

That’s bad enough, especially if you’re still in the workforce. But the fact that stock buybacks — once illegal, now pervasive — heavily distort the stock market most of us rely on to fund our retirement is every bit as bad.

That’s why it’s so important to follow our gurus here at Banyan Hill … we’re after true value, not cheap financial flimflam.

Editor’s Note: With over 15 million lawsuits filed in the U.S. every year, you have a 1 in 10 chance of being sued in any given year — even if you haven’t done anything wrong. That’s why you need a copy of Lawyer-Proof Your Life now more than ever. This controversial new book will show you step-by-step how to shield your personal assets from frivolous lawsuits, ridiculous claims and unreasonable jury awards. To get your free copy now, click here.