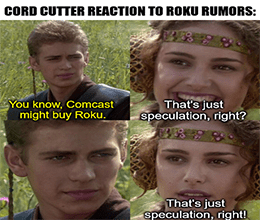 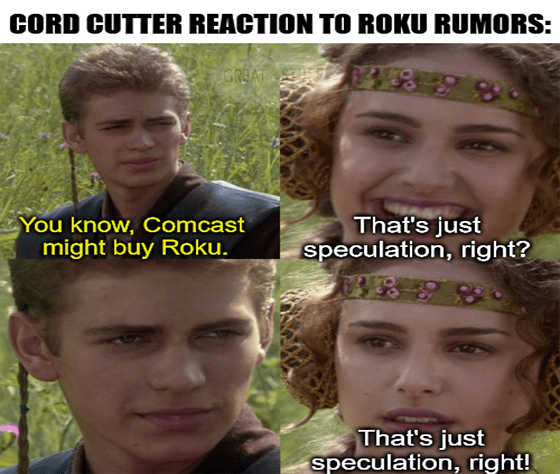 ♫How do rumors get started? They’re started by jealous people and…♫

But before we get to that, a little Friday fun: Do you know the song lyrics up there in italics? Without Googling them, that is. I bet I finally stumped you guys with this ‘90s one-hit wonder. Have I? Write in and let me know: GreatStuffToday@BanyanHill.com. (No cheating!)

We all knew that the bigger Roku got, the tastier it would look to the behemoths of the entertainment media market.

After all, the company is raking in money hand over fist right now from both streaming hardware sales and ad revenue.

Roku currently dominates the streaming device market, and no amount of discounted Amazon Fire TVs have changed that fact. (I’m looking at you, Prime Day, and your shameless Amazon device discounts.)

Now, given Comcast’s size and the fact that it has already gobbled up NBC, the ViacomCBS speculation isn’t going anywhere. There’s just no way antitrust regulators would let such a thing happen. None.

But Roku? There’s a very real threat there if Comcast decides to court Roku.

On one hand, Roku is definitely worth the money. The company blew away Wall Street’s earnings estimates for the past year, and ad revenue growth helped propel Roku’s bottom line more than 79% higher in the last quarter. Add to that a growing stable of original content, and Roku is on the cusp of becoming a dual-threat in the streaming market.

On the other hand, if you want to see just how fast consumers will abandon ship, let Comcast buy out Roku. True story: I will be among the first out the door … and I have, like, four Rokus in my house.

Cord cutters were Roku’s earliest adopters and are now its biggest supporters. When Roku first started out, the company was seen as a savior, giving consumers an easy way to cut the cord, lower their bills and escape the cable TV giants.

There’s already growing discontent with the core cord-cutting crowd over Roku. Reddit forums like r/cordcutters used to put Roku up on a pedestal as a quick-and-easy way to cut ties with cable companies.

After licensing disputes with AT&T and YouTube, that narrative is shifting, with cord cutters starting to view Roku’s carriage negotiating tactics as a liability.

If Comcast, one of the original cable TV boogeymen, bought Roku? You’d see a mass exodus of principled cord cutters, followed by a dramatic shift in consumer sentiment toward Roku. Practically nobody in the cord cutting world likes Comcast … and that likeability drops to zero for anyone who’s dealt with Comcast customer service.

Now, I’m pretty sure this takeover speculation is just that — speculation. But it does put Roku investors on notice.

Right now, Great Stuff Picks readers in Roku are sitting on gains of 372% and 217% — depending on whether you bought in May 2019 or December 2019. I’ve kept my buy recommendation on ROKU open for some time, so your results will definitely vary.

I’m willing to let this ride as an open buy recommendation for the time being. Comcast’s interest reinforces my belief that Roku is a leading force to be reckoned with in the streaming market. If the big boys are worried — and that’s what a takeover bid means at this point — then Roku is doing something incredibly right.

However, if Comcast follows through with this speculation — or another big-time cable company attempts to have Roku for lunch — it’ll be time to look for the exits.

So, hold on loosely, but don’t let go. (If you cling too tightly, you’re gonna lose control…)

According to famed investing expert Adam O’Dell, gold is poised to hit $10,000 over the next five years. Sound nuts?

He lays out the undeniable case here, along with a little-known way you could 9X your gains as gold soars.

If you want to get in on the ground floor of gold’s new bull market — where the biggest gains could be had — you need to act now. 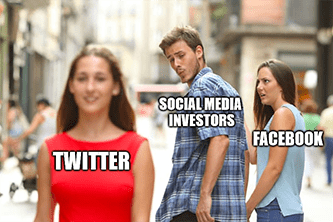 I’ve long thought that Twitter (NYSE: TWTR) was the superior social media company. While the company carries a considerable stigma due to political beliefs, Twitter usage spans more generations than either Facebook or Snap.

Twitter’s main problem, however, is that it never quite got the ad revenue ball rolling like Facebook did. And, well, we’ve seen where unscrupulous advertising got Facebook…

First, it implemented “Super Follows,” which allows content creators to charge followers money to customize their Twitter feeds. Current price points range from $2.99 per month to $9.99 per month.

And the terms are rather agreeable, with Twitter only taking a 3% cut until users exceed $50,000 in lifetime earnings across both products. After that, Twitter’s cut rises to 20%, which undercuts Apple, Google and Facebook’s roughly 30% take on similar activities.

Right now, these features are only available in the U.S. But I expect Twitter to roll them out globally in short order.

The bottom line here is that if you want to invest in a social media company with better longevity prospects than Facebook and higher-paying users than Snap, Twitter is where you need to be. 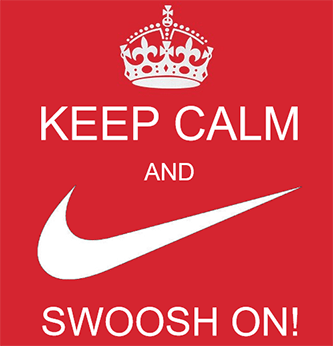 Who would’ve thought that ending a pandemic lockdown would send so many people running to buy shoes? (I mean, in hindsight, it seems like a no-brainer.)

Nike even saw gains in China, where sales rose 34% despite Chinese consumer protests over Nike’s stance on Xinjiang. It seems that even the CCP can’t stop people’s love for shoes.

But even the numbers paled in comparison to the praise that the analyst community heaped upon Nike. Jefferies Analyst Randal Konik said: “Nike is one of the best brands on the planet.” Konik named NKE a top pick and set a $200 price target on the shares — roughly a 50% upside from current levels.

“The brand has no parallel in history,” said Simeon Siegel of BMO Capital Markets. Siegel reiterated his outperform rating on NKE with a $174 price target.

Best brand on the planet and no parallel? Wow. Could Wall Street be any more bullish on NKE?

With Nike literally knocking it out of the park, it’s hard to argue with these uber bulls. NKE remains a solid investment idea, but if you’re looking to get in, you might want to wait for a pullback — likely to the $145 or $150 levels.

Elon Musk calls it “amazing…” While a Harvard Ph.D. says it could “[surpass] the space, atomic, and electronic revolutions in its significance.” 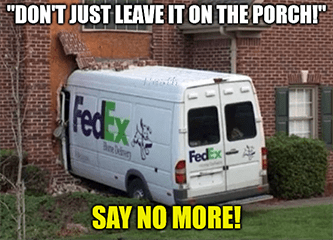 You know, FedEx (NYSE: FDX) had a great thing going this past year. Everyone was locked down, and, well, I guess you don’t need a reminder of that part…

At first, FedEx was raking in the dough from everyone sending and receiving packages like mad. Then, the Great Reopening started, and flush with stimulus cash … people just kept on buying junk (and shipping said junk).

Name a better pandemic-propelled business — what’s not to love here?

Apparently everything, if you believe Wall Street. For as many tailwinds as FedEx had going into last night’s earnings announcement, the company was no match for the 2021 two-step.

FedEx’s revenue hit $22.6 billion and handily topped estimates for $21.5 billion. Those sales are up 30% over the past year — the fastest that FedEx has grown its revenue since 2010.

Earnings were another story, and FDX only beat estimates by a single penny. Underpinning the penny-pinching this earnings season: increased costs from both staff bonuses and rising wages, which might’ve alarmed FDX’s inflation-fearing investors more than anything.

That said … FedEx’s optimistic earnings guidance should’ve relieved those worries, but no dice. For 2022, FedEx expects $21 per share, whereas analysts only projected $20.63. But would a double beat by any other name smell as sweet?

As far as the Street is concerned, it’s not enough — I need more! Nothing seems to satisfy when it comes to FDX. The stock was down about 5% on the news and continued to sink throughout the day.

But … why? Well, as we said, rising costs might’ve spooked investors. You say short-term inflation — investors say sell-off. And it looks like the narrow earnings beat, while still a beat, showed that revenue growth is outpacing earnings growth for FedEx.

From a technical standpoint, the double-beat report wasn’t enough for FDX to break through resistance at $300. With support near $285 from FDX’s June 18 low, I think the selling will probably abate here today, and FDX will consolidate in this range for a bit. 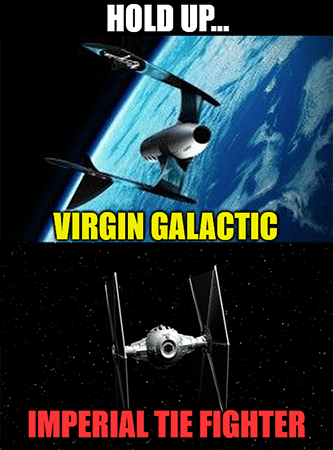 We’re going to space, Great Ones! Well … I’m not. But you might.

I’d bet you ballers out there already have reservations for Virgin Galactic’s (NYSE: SPCE) spaceflights, since the company was just officially licensed to start its commercial space adventures.

Up to now, Virgin’s spacefaring license (always good to keep on hand in case of space cops) was mainly for testing its vehicles and spaceflight systems.

But with the company’s recent flight tests in the books, the Federal Aviation Administration expanded that license to allow Virgin to start bringing commercial passengers up to almost-kinda-not-quite-space.

For now, the only folks airborne are SPCE investors, who sent the stock upwards of 33% today. And if you weren’t on board already, the Virgin Galactic hype train has long since left the station. If you were tempted, don’t chase the shares any higher because, just like every other past hype-fueled rally, SPCE will freefall back down to Earth in no time.

This is America. Didn’t you know the “rocket’s red glare” was talking about Virgin Galactic? It’s in a song and everything. And nothing gets my patriotic blood pumping than sling-shotting some billionaires into space while I munch on some brats.

There Goes The Weekend…

Great Ones, here’s the real deal Holyfield, listen up:

I know you’re itching to ditch the virtual world and go check out that “outside world” thing this weekend, but first, a quick heads up from the Great Stuff Team. We’re giving y’all a breather this weekend — that’s right, there will be no new Saturday edition hitting your inboxes tomorrow.

Capisce? I just wanted to let you know, so you’re not left waiting and staring at your inbox anxiously tomorrow morning. We’ll catch up with you on Monday, so have a tremendous weekend!

Oh, and if you get the hankering to drop us a line with your thoughts (market-related or otherwise), we’d love to hear from you.

GreatStuffToday@BanyanHill.com is where you can let your own individual greatness shine. Or … just complain about the times — we get a lot of that too. 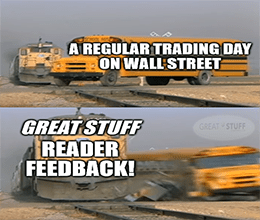 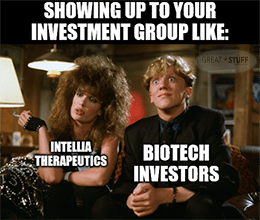