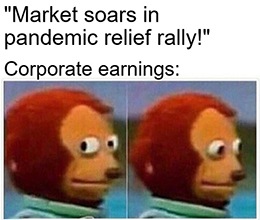 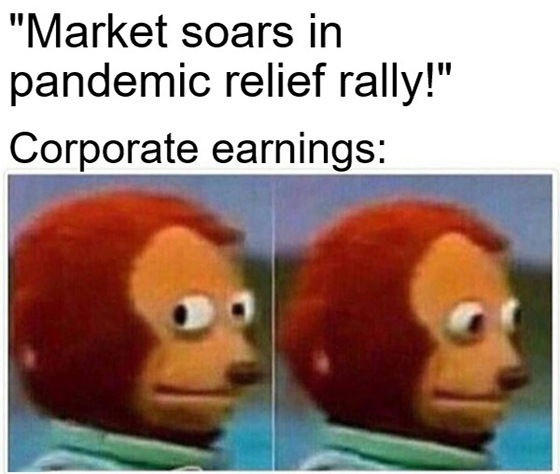 How Do You Spell Relief?

It was 2% to 3% gains across the board as the market opened. Wall Street finally has concrete data on how the pandemic has affected American businesses.

I mean, why should you worry? The market just logged its biggest weekly rally in four decades!

President Trump is pulling together a pandemic council to speed up reopening the U.S. economy. States are banding together to work on their own economic reopening plans. COVID-19 cases have stabilized and should soon start to decline.

If market activity is anything to go by (and the market is never wrong, right?), we’re all worried about nothing.

Wait … hold up. Nothing to worry about? Who is this, and what have you done with Mr. Great Stuff?

Sorry, dear readers. The bourbon is running low, the coffee is gone and we’re almost out of milk. I know I should drink water, but we’re out of Bud Light and White Claw, too. All I had left was Kool-Aid.

All right, where to begin?

How about last week’s relief rally? The rally that every “market bull worth his salt” is crowing about right now.

There’s a funny thing about that rally. It was indeed a relief rally … but not the kind you might think of.

The only investors relieved were short sellers. It was what market technicians call a “short squeeze in negative momentum.”

Now, what that means is that short sellers saw a massive profit opportunity — i.e., repurchasing their short positions at low, low prices and banking the returns. That rally fuel has now dried up, according to Rebecca Cheong, UBS Securities’ head of Americas equity derivatives strategy.

“Recent factor moves are more in-line with past fake rallies than final recovery,” Cheong wrote. “We expect short-covering is likely over … Positioning risk is now more vulnerable to long reduction.”

OK, so we have a plausible reason for last week’s massive rally. The question is … why last week?

Earnings season brings volatility and unknown outcomes. If you read through today’s quarterly reports from JPMorgan, Fastenal and the like, you’ll notice that the overall top-line figures were better than expected. Hence, today’s rally.

But while these headline figures promote a feeling that everything’s OK, there are much more concerning issues lying just beneath the surface.  (We’ll get to those in a minute.)

Suffice it to say that short sellers wanted nothing to do with this earnings-induced volatility and banked profits early, leading to last week’s mother-of-all short squeezes.

As earnings season lumbers on, many of these shorts may wish they had held their positions a little while longer. After all, you get cherry-picked earnings info in headlines from the major financial publications. (Did you see Conn’s Inc.’s (Nasdaq: CONN) earnings report mentioned anywhere? I didn’t think so.)

So, what’s a non-Kool-Aid drinker to do at a time like this?

Well … there’s a better way to play earnings season — no matter what ungodly results come from the earnings confessional — and one earnings strategy blows me away every time.

Earlier this year, one of Banyan Hill’s teams closed out a four-day gain in Tesla Inc. (Nasdaq: TSLA) for 438%. And in 2018, its strategy was responsible for the biggest individual trade at our company in the last five years — a 526% gain on Caterpillar Inc. (NYSE: CAT) in three months!

Let’s be honest, the markets are rough right now for all of us…

We’re set for a catastrophic earnings season — the grandpappy of corporate earnings calamities, if you will. Instead of running for the hills, this trading research team is eyeing new “Quick Hit” trades as we speak — err, type?

Click here to hear about a better way to play earnings season. 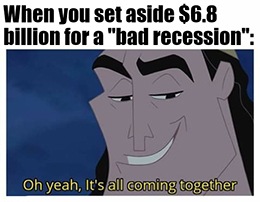 The major earnings headline today was from JPMorgan Chase, and it comes with a few provisos … a couple of quid pro quos…

The banking behemoth reported earnings of $0.78 per share, whiffing the consensus estimate for $1.84 per share. Revenue held up, however, arriving at $29.07 billion and beating expectations.

There are two key points to note here. First, JPMorgan’s earnings missed because the company set aside $6.8 billion in credit reserves. In short, the bank expects an influx of credit defaults across its lending businesses.

And there will be more default prep to come, according to Chief Financial Officer  Jennifer Piepszak. In a conference call with investors, Piepszak said that JPMorgan could be forced to add billions more to its credit reserves to stave off defaults. This is a smart move by JPMorgan, but it’s a very negative sign for the U.S. economy.

Second, revenue remained strong because of a record 32% jump in trading revenue. JPMorgan clearly has the right outlook on the market and trades. What is that market outlook? A “bad recession” and financial crisis like 2008.

Today, JPM stock was pounded because the company told the truth. I like the company’s honesty and its trading performance, but exposure to rising credit defaults will keep JPM shares on the back burner for now. 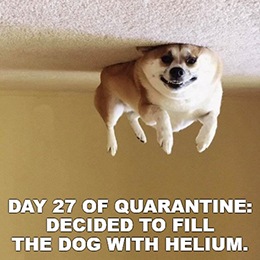 If the case for a bull market rebound has a poster boy today, it’s Fastenal.

Fastenal makes industrial and construction fasteners, and industrials have supposedly been hit hard during the economic shutdown. However, the company beat Wall Street’s first-quarter earnings and revenue estimates, leading many to speculate that the pandemic’s impact on businesses has been exaggerated.

FAST shares rallied more than 6% on the news.

However, if you read past the headline figures, you find interesting data. Specifically, Fastenal’s earnings release noted: “The second half of March saw activity levels weaken significantly in response to societal actions meant to address the coronavirus pandemic.”

Digging deeper reveals that gross margins dipped, and sales growth slowed significantly. The biggest red flag in my book, however, is the fact that Fastenal didn’t provide guidance for the rest of the year.

Conveniently, Fastenal doesn’t typically provide guidance. So, I can’t really complain too much here about the company’s lack of transparency. But,  I think you can see, Fastenal isn’t the herald of market bullishness that today’s market headlines make it out to be.

Best: Island in the Stream… 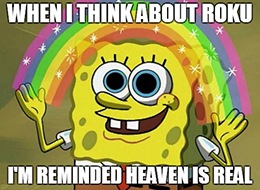 There’s no one in between you and your streaming content with Roku, since the company’s platform is content agnostic. And after the company lifted its first-quarter guidance this morning, how can we be wrong … to … um … recommend the shares? (Weakest lyrical reference ever. Sorry, Dolly.)

Here’s the deal: Roku lifted revenue guidance and projected a 3-million-account net increase for the first quarter — bringing the company to 39.8 million active users. Furthermore, Roku said it anticipates streaming hours to increase by 49% year over year for the period.

With everyone stuck at home these days, Roku is really starting to shine. Now, the company did withdraw its full-year outlook due to the pandemic, but I believe it’s being conservative.

After all, Roku has the leading home-streaming hardware platform on the market. It’s the reason why Great Stuff has recommended buying ROKU shares since May 2019.

It doesn’t matter which streaming service you use — it all works on Roku. Plus, Roku’s streaming devices are among the most affordable on the market, meaning it will remain a leader even throughout an economic downturn — especially when cord cutting picks up as consumers look to cut costs.

I tell you, the past few weeks, scammers have risen from the woodwork quicker than you can scream “stimulus check!”

Along with the hordes of rampant robocallers and salivating solicitors have come mighty myths. As always, Great Stuff is here to help you tell truth from fiction … or at least debunk what nonsense people post online.

If you have questions on your stimulus check — or know anyone who’s easily fooled by pranks, scams and gags — today’s Quote of the Week is for you, courtesy of CNBC’s Make It.

CNBC’s article busts seven different myths that you might’ve seen slithering their way across social media. (Surely not by word of mouth … you aren’t breaking social distancing, are you?)

I highly recommend you read through the entire piece … but here’s the skinny in the meantime:

Seven myth-defying quotes in one Quote of the Week? Now that’s Great Stuff.

Seriously: If any of these myths made you think, “Oh, I know Bethany would fall for that…” then you need to forward this email to her pronto! Jeez, c’mon, Bethany… 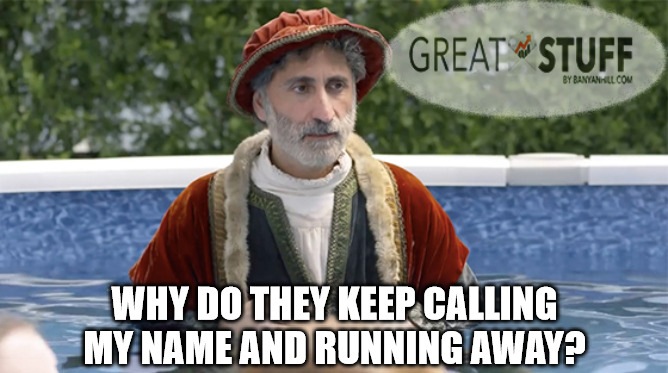 It’s almost that time again! You know the drill, you “Marco,” I “Polo!”

Just two nights and a wake-up … and it’ll be time for this week’s edition of Reader Feedback. Have you written in yet? No? It only takes a sec to drop us a line at GreatStuffToday@BanyanHill.com.

I’ve seen a sea of new names in the inbox this week, so if you’re just now tuning into Great Stuff, welcome aboard!

Many readers also wrote in with thoughts (read: rants) on reopening the U.S. economy. No matter your viewpoint on these viral times, all I can say is keep your emails coming!

Write to us anytime day or night (we’ve got nothing but time these days) with whatever’s on your mind … be it the market’s fake-outs, this upcoming earnings season or what keeps you occupied during quarantine. 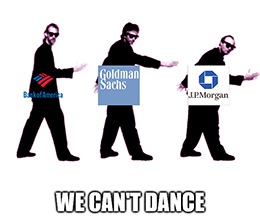