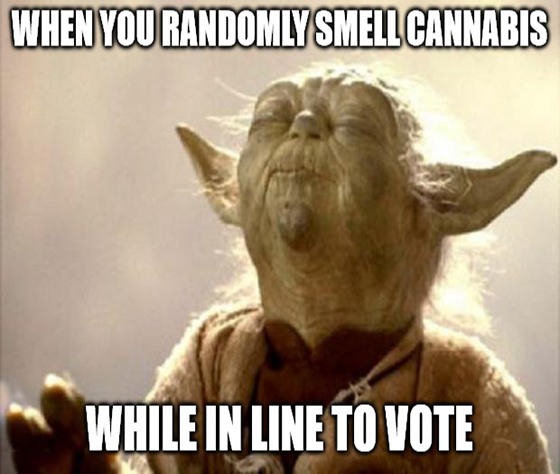 Time to Toke, or Up in Smoke?

Welcome to Election Day, Great Ones!

The madness is almost over. Maybe my phone will finally stop ringing off the hook with political calls. Maybe Facebook will finally graciously stop offering voting information.

If you already voted, congrats! If you’re still in line waiting … keep waiting! Your vote matters.

Hopefully after today, we will all get to relax a bit and take a load off. It’s time to de-stress. For some voters … de-stressing could mean a little something extra.

I’m talking about the wacky weed. Mary Jane. The devil’s lettuce. Cannabis, for those in the industry.

Depending on how the votes fall, this could be a big day for the cannabis industry.

Right now, cannabis is outright illegal in 16 states, legal for medicinal purposes in 34 and legal for recreational use in 11 states, including the District of Columbia. Today’s vote has the potential to boost that recreational number by four.

“It’s really showing the kind of breadth of acceptance that we’re seeing around the country with respect to cannabis,” said Steven Hawkins, executive director of the Marijuana Policy Project.

But while decriminalization and legalization in a handful of states is a positive for the cannabis industry, it doesn’t mean you should rush right out and buy marijuana stocks. There’s another key bit of legislation that needs to happen before we start buying cannabis stocks by the bag — federal banking reform.

You see, since cannabis remains tightly controlled at a federal level, pot operators can’t use banks like regular companies. In fact, federal law enforcement prohibits banks from dealing directly with cannabis companies — even if they are legal at a state level.

So, while legalization in Arizona, Montana, New Jersey and South Dakota and a Biden win would be somewhat bullish for the cannabis industry, it still won’t make a big enough splash to make cannabis stocks a must-own.

For that to happen, Marijuana Business Daily speculates the needed reform hinges on “whether the U.S. Senate flips to the Democrats and former Vice President Joe Biden wins the presidency.”

Keep in mind, I don’t endorse either side here. This is just what industry insiders say needs to happen before we get that big cannabis boom we all hoped for back in 2018.

So, what if Election Day plays out in cannabis’s favor? What stocks should you look at?

There are two stocks with major U.S. exposure that you need on your short list: Curaleaf Holdings Inc. (OTC: CURLF) and Canopy Growth Corp. (NYSE: CGC).

Curaleaf is one of the biggest U.S.-based cannabis businesses, with exposure in every state where marijuana is legal. Meanwhile, Canopy Growth is an already-established Canadian cannabis company, and its partnership with Constellation Brands Inc. (NYSE: STZ) gives it significant leverage stateside.

But then there’s the double-play pot opportunity that no one’s talking about. One former hedge fund manager just revealed details on a company that’s positioned to dominate the marijuana sector in not just one, but TWO huge ways … potentially across the entire Western Hemisphere.

Get the details here. 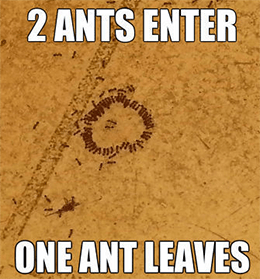 China giveth, and China taketh away.

Ant Group, the Chinese fintech giant backed by Alibaba Group (NYSE: BABA), was on track to be the biggest initial public offering (IPO) ever. Ant was set to rake in some $34.5 billion in a dual listing on both the Hong Kong and Shanghai exchanges. That’s even bigger than Saudi Aramco’s $29.4 billion IPO!

The keyword there is “was.” This morning, Chinese regulators put a stop to all that.

Citing “significant issues such as the changes in financial technology regulatory environment,” the Shanghai Stock Exchange suspended Ant’s IPO. According to a CNBC translation of the statement: “These issues may result in your company not meeting the conditions for listing or meeting the information disclosure requirements.”

Following the news, Ant Group said that its Hong Kong listing would also be suspended.

Ant Group has, so far, declined to comment on the news, but an official filing with the Shanghai Stock Exchange should arrive soon.

Part of Ant Group’s problems could stem from new online micro-lending rules issued by China’s central bank on Monday. Alibaba, Ant Group’s largest shareholder, said it would continue to support the fintech company in its quest for a public listing.

BABA fell more than 6% on the news. 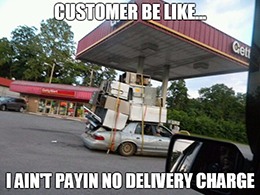 When I last wrote about Wayfair, I called into question the company’s negative operating margins and ridiculously outsized online ad spending. My belief at the time (waaay back in April) was that Wayfair’s excessive spending would help it through the pandemic, but that this success would be short-lived — just like the pandemic lockdowns.

We’re still amid limited travel and shopping due to the pandemic. And Wayfair thrived, thanks in large part to the company’s investment in online advertising to get the word out.

What’s more, margins are back with a vengeance. Wayfair reported gross margin of 29.9% and projected fourth-quarter margin in the 26% to 28% range. In other words, Wayfair’s spending gamble paid off in spades.

Now, I’m not yet ready to tell y’all to go out and buy W shares … nope. But I’m evaluating the company’s staying power amid the shifting U.S. economic picture. Finally, should American consumers get another pandemic relief check from the government, Wayfair could certainly benefit.

Put this one on your list of companies to watch and potentially buy in any market pullback. 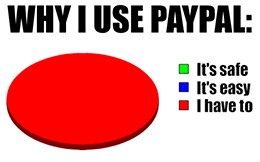 If Wayfair emerged from its earnings crossroads with a proud online takeover, PayPal Holdings Inc. (Nasdaq: PYPL) sulked away with a little nostalgia and a fair bit of misdirection.

The once-trusty steed in the land of eBay dominance, PayPal’s growth is slowing in a world run by startup fintech competitors.

Revenue for the quarter hit $5.46 billion, beating expectations for $5.42 billion. Earnings per share came in at $1.07, besting the consensus for $0.94. So far, so good, and both numbers showed a year-over-year rise at that.

But when it comes to the fourth quarter holiday season, PayPal Scrooged it up and only predicted a 17% to 18% increase in earnings. The shame!

Now, PayPal has its Venmo cash-sending service to thank for the tremendous quarterly growth — but we can’t be the only ones wondering how long King PayPal’s dominance will last. The company’s at risk of losing its online payment crown now for one simple reason: no offline payment system.

When you look at a competitor like Square Inc. (NYSE: SQ) that offers a similar cash-transferring app and a way in on physical retail through Square point-of-sale systems, PayPal has squat-ski other than a way to buy more and more vinyl online. (It’s a form of therapy … leave me alone!)

When you’re in the checkout line, you pay with what you’re most comfortable with. And both Google and Apple have easy tap-to-pay options that are accepted everywhere. PayPal does not. And unless it gets deeper into the fintech game, the online-payment throne may be up for grabs.

Besides, the entire fintech game will never be the same with the whole blockchain trend in action — and that’s where the real money will be made in fintech.

If you’re not up to speed on what blockchain technology is — and why it’s set to spawn more millionaires than any event in history — click here ASAP!

Down on the corner, out in the Street, Cramer and the poor boys are playin’. Grab a nickel, tap your feet, and head over to Cramer’s Corner for our Quote of the Week!

I’ve ragged on Cramer often enough here, but we’re more on the same page today than in weeks prior.

Once again, we dive into the fine lines between sentiment and market timing. Here’s Jim Cramer from last night’s Squawk Box:

I think that no matter who wins, you have a quick dip and you have to buy. I know that sounds simplistic, but the market is simplistic. We always try to make the market as some sort of Einsteinian philosophy.

Ain’t that nice? Turns out we’ve been overthinking this whole shebang all along.

I don’t disagree … but let’s dig into some of Cramer’s reasoning. He went on to say that “investors wanting to get ahead of any post-election rally could explain why U.S. stock futures rose on Election Day,” swapping out high-flying tech stocks into lagging value names.

If you’ve been staying up to speed on your Great Stuff, all this seems to dovetail with what we’ve recommended so far this year. Stick with your own preferred blend of safe havens, but keep a mattress full of cash on the side for when the time is right and ‘Stuff hits the fan.

When it dips, you dip, we dip … into the market and scoop up every bargain you can find.

Now, whether or not Cramer’s advice fits with your own investing prospects depends on your horizons and how much mindspace you’ll devote to stressing about market whipsaws over the next few months (or years).

For the average Joe investor out there — the 401(k) club and retiree investors — this is true. If we see a dip and increased volatility, keep holding and go back to trawling through Great Stuff.

Same deal for the long-term market greenhorns. If “buy and hold” is your bread and butter, you’re still waiting on another March-like event to buy into. Otherwise, you probably still hold what you’ve got from before and haven’t taken profits on.

The market’s near future is too jittery — too much volatility. And the election only solves one of the problems underpinning volatility. If you’re a more active trader, taking Cramer’s advice on buying an election dip could be a good idea, but you’ll be looking over your shoulder for another reversal to protect your profits.

Regardless, the pandemic is still the one wild card left in the volatility poker match. All Great Stuff’s saying is be careful out there if you want to make like N’Sync and buy, buy, buy. For those of you who voted in last week’s poll, you’ll know that 80% of Great Ones are still in this ballgame and buying up a storm.

If you didn’t vote and let us know what you’re doing amid the election volatility, now’s your last chance to, so click here! We’ll dive into the results in detail tomorrow. It may not be the only poll we’re focused on tomorrow, but we’ll get there…

Great Stuff: Squawk Back at Us!

All right Great Ones, this is the home stretch. Maybe you’ve got one eye on the election coverage; maybe you’re reading this issue in line at the polls. Either way, thank you for taking part in the democracy that makes us all Great.

But don’t let all that get in your way of making your voice heard around here, too!

If you’ve never written to us before, there’s no better time. We’re about to ramble on with you in this week’s edition of Reader Feedback on Thursday — just a day and a wake-up from now. So get to rabbling, and we’ll get back to you.

GreatStuffToday@BanyanHill.com. Send us your best Stuff! Your wit, your grit, your rants and your questions. We accept it all in these virtual pages. Thanks in advance, and we’ll catch you tomorrow! You can always follow us on social media too: Facebook, Instagram and Twitter. 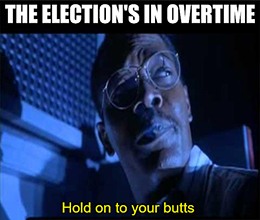