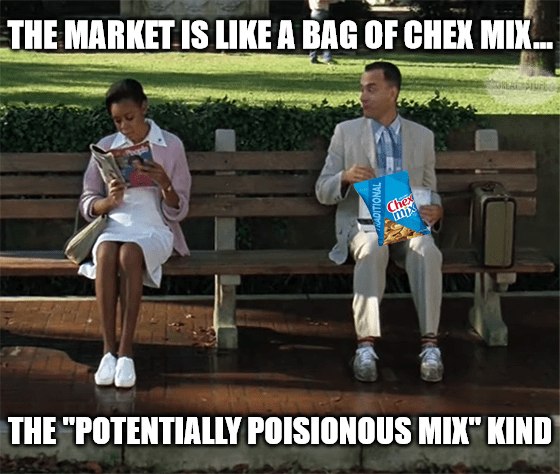 Every Market Has Its Thorns…

Great Ones, they say that Chex Mix is a bag of interesting. But I wonder what the marketing wizards at General Mills would call a “potentially poisonous mix?”

Clearly, “potentially poisonous mix” doesn’t roll off the tongue like Chex Mix … but I guarantee you boxes of “Potentially Poisonous Mix” cereal would have flown off the shelves back in the ‘80s.

What in tarnation are you rambling about today, Mr. Great Stuff?

Oh, right. I haven’t shared the story yet.

I wonder if “potentially poisonous mix” has those little brown, crunchy chips that taste like heaven?

Dude, lay off the Chex Mix. What happened to the song lyrics?

I want song lyrics, but I want them too much. (Too much.)

I wanna invest, but Mr. Knutzen tells me to stop.

I wanna buy stocks, but the market is venomous poison!

A potentially poisonous mix running through my veins!

Thank you. Now where were we?

Ah, yes … the poisonous market mix. What Mr. Knutzen is saying without actually saying it is that he expects stagflation. I know you’re not supposed to say the “S” word, but it is what it is.

If Mr. Knutzen is right about rising interest rates and slowing economic growth, there’s no need to come up with a new, more ominous term like “potentially poisonous mix.”

Stagflation is scary enough for those of us who remember it. And stagflation is exactly what Knutzen is describing:

Because of slowing growth and valuation concerns, Knutzen downgraded all equities to underweight. 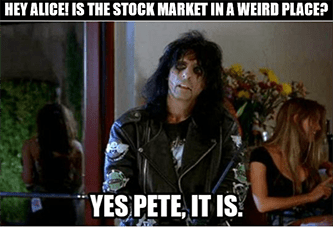 That said, the one wrinkle in Knutzen’s outlook involves the Federal Reserve, of course.

He believes that if the Fed sees “any sign of success” in cooling inflation, while maintaining jobs growth and industrial activity, Knutzen will be willing to reassess his market outlook.

I have to say, Great Ones … Chex Mix and Alice Cooper aside … that I find it hard to disagree with Mr. Knutzen’s market outlook.

Y’all know I believe that a correction needs to happen sooner or later. Y’all also know that I’m concerned about U.S. economic growth, especially on the housing side of the market.

But that doesn’t mean you should sell all your stocks and put your money under your mattress. When the market gets tough, the tough get going … or something like that.

The problem is that most investors don’t realize you can make money in any market condition — not just bull markets. In fact, my colleague Michael Carr is an expert at handling volatile market conditions…

Ah, here we go again. Must be overdue for the weekly “forget stocks and start trading options” rant.

Wow, way to ruin the surprise. Gimme a “spoiler alert” or something, gosh…

In fact, why don’t I let Mike Carr, the man, the myth, the legend himself, fill you in on the best volatility-beating options? Earlier today, Mike said:

The best way to trade right now is with one eye toward the exit. That’s how I trade in One Trade, and we’ve had success in similar markets with this strategy.

In February 2020, for example, as officials assured us the pandemic was nothing to worry about, I recommended a put option that gained more than 49% in three days.

This past February, a similar signal resulted in a put trade that gained 77% in one day.

We don’t only trade puts in One Trade, either. We benefit from calls when prices are going up.

The Lovesac (Nasdaq: LOVE) store is a little old place where we can chill foreverrrrr…

No, really. If these mammoth beanbag chairs are actually as comfy as they look, it could be a few years before you manage to wriggle your way out of one. Buyer beware!

Cozy confines aside, Lovesac’s latest report revealed demand for the company’s beanbags and beanbag accessories is still “as big as a whale!” And said demand is helping investors’ portfolios set sail … with LOVE stock climbing an enormous 30% after the market opened for trading.

Why the big boost in share price? Take your pick from any of Lovesac’s quarterly updates:

•  Comparable sales — including showroom and internet sales: Up 50%.

In other words, for a company that predominately sells elitist dorm room furniture … Lovesac really blew all of Wall Street’s expectations out of the water this quarter, proving this fancy furniture fad has wings.

Even I have to admit that looking at Lovesac’s … erm, sacs this morning made me rethink what I spent all my stimulus money on. I’m gonna have to go try one of these suckers out sometime soon … you know, for science.

Just when I thought the COVID-19 blame game was making its final round, in walks Dave & Buster’s (Nasdaq: PLAY) with its battered and bruised fourth-quarter earnings report singing the ‘Rona blues.

To be fair — 🎵 to be fair 🎵 — I can’t think of a better place for COVID to spread than Dave’s dark and dirty game room … unless we’re talking about Dave’s even darker and dirtier bar. (Just do yourselves a favor and trust me on that last bit.)

According to Dave & Buster’s interim CEO: “Despite continuing headwinds from COVID-19 (including vaccine requirements in certain markets), we saw strong sales across our stores in fiscal 2021.”

Thing is, these strong sales weren’t enough to meet Wall Street’s earnings expectations, with earnings per share coming in a full $0.09 lower than anticipated. Meanwhile, revenue rose to $343.1 million from $116.8 million a year prior … narrowly missing the Street’s $364 million sales estimate.

This cost-saving cover calmed Wall Street’s disappointment in Dave & Buster’s … and by mid-morning, investors had gotten their game on and were ready to go PLAY (coronavirus be damned).

The Ugly: Bungling The Bundle

Is it just me, or is today’s ticker symbol lineup starting to look a lot like subliminal Sony (NYSE: SONY) marketing designed to drive hype for its new PlayStation Plus subscription service?

In case you missed it, Sony’s “sticking it” to Microsoft’s (Nasdaq: MSFT) Xbox by bundling its existing PlayStation Plus and PlayStation Now services into a single, streamlined subscription package.

Sounds swell, until you realize Sony’s new service is tiered … meaning you still won’t have access to Sony’s full suite of games unless you pony up for its PS Plus Premium package for $18 a month. Womp womp.

This “deal” starts to look even dingier when you compare it to Xbox’s Game Pass Ultimate — which gives users access to every game within Microsoft’s multiverse, along with Day One releases and cross-PC functionality … all for just $14.99 a month.

Now, don’t get me wrong: Sony’s new Plus package is still better than its old Plus package. But it’s not good enough to beat Microsoft’s Game Pass (yet) … which makes today’s announcement a lackluster move on Sony’s part.

Not that this is gonna change any diehard Sony fanboys’ minds, mind you. That cult of gaming personality is still going strong, and it’ll take more than quality — or quantity — on Microsoft’s part to compete with such well-built branding.

I mean, have you seen any PS5s in stock like … anywhere? ‘Cause I haven’t.

Editor’s Note: This Strange New Tech Could Shake America to Its Very Core

Even members in the U.S. Senate have gone on record stating: “There may not be a single technology that will shape our world more in the next 50 years.”

Now, according to Adam O’Dell, the company with the biggest potential to benefit from this new tech rollout has been virtually overlooked by the rest of the market.

Yet, the savvy investors who get in today have the best shot at raking in the biggest gains about to unfold. Because this new tech is expected to create a massive $80 trillion windfall over the next 10 years.

The macroeconomic environment is evolving rapidly. Declining COVID cases and a resumption of general economic activity has stoked inflation, and the Federal Reserve has begun to increase interest rates in response.

Look who finally caught up on last week’s Great Stuff!

At the risk of turning our Quote of the Week into a Roast of the Week, let’s break the housing market down some. Because Heaven knows Great Stuff and the rest of the financial media haven’t talked it up enough already…

So rising materials and labor costs are causing house prices to go up (no duh). It’s becoming increasingly more expensive for the average American to finance a house because of … you guessed it … rising mortgage rates.

Oh, and does anyone want to mention those rising property taxes? And homeowners’ insurance? No? Cool, we’ll just chalk that up to part of the rapidly evolving macroeconomic environment that Craig’s talking about here…

None of you should be surprised by Mr. Lazzara’s sudden burst of clarity if you’ve been keeping up with your Great Stuff for the past two years running. And I sure hope none of you are surprised when some Analyst Come Lately makes the same remarks next week.

But why should we limit ourselves to just one boneheaded Quote of the Week? Why not tuck into a second breakfast of ridiculous real estate understatements?

Did you know that the pandemic also turned office real estate on its head? You know, that time when everyone (who could do so) ditched the office and started working from home? That time when office vacancy rates soared and … oh, they’re still soaring actually.

New reports show that office space vacancy went up an average of 2.5% nationwide between Q4 2020 and Q4 2021. And the number of office mortgages “showing signs of being in trouble” is up to 21% — the highest level since the last financial crisis.

You might be wondering: What kinda groundbreaking insight is the analyst community offering up in this trying corporate time? Let’s see:

That’s an indication that something not great might be starting to bubble up within the office sector. — Lea Overby, Barclays analyst

“Something not great” this way comes, eh? Well bubble, bubble, toil and trouble. The housing market is ready to buckle — and make that double, for office space real estate.

Talk about a “potentially poisonous mix.”

What do you think, Great Ones? What’s next for the housing market? Do you trade options to outplay the market volatility? Let me know in the inbox!

GreatStuffToday@BanyanHill.com is where you can reach us best. 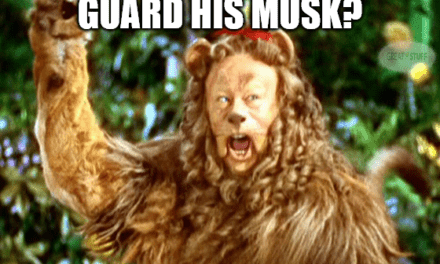 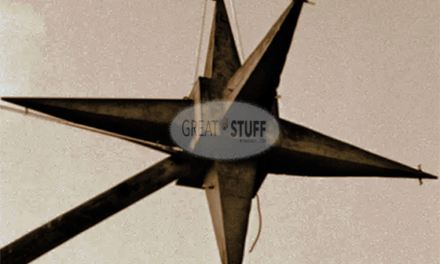