According to The Washington Post: “The bill cuts the top rate that large corporations pay from 35 percent to 20 percent, the biggest one-time drop in the big-business tax rate ever.”

In addition to a deep rate cut, companies will get some new tax breaks to help lower their bills, such as:

This all sounds good for earnings on paper. But, as the chart below shows, corporations aren’t paying the top rate. Over the last 12 months, companies in the S&P 500 paid only 22% of their income in state and federal income taxes. 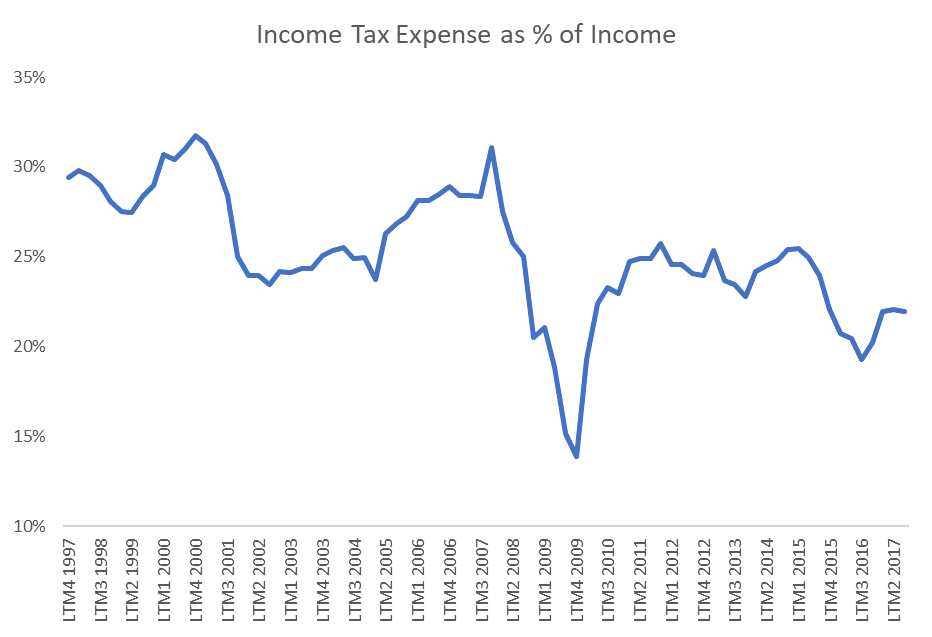 Over the past 20 years, the average tax bill has been 25.2%. The truth seems to be that corporations will use any tax reduction strategies available to them.

Cutting the top rate will lead to lower tax bills. But the amount is going to be less than expected. Even though tax reform proponents claim they’re cutting loopholes, they’ll still be there.

There are billions of dollars at stake. S&P 500 companies paid over $36 billion in income taxes in the past 12 months.

With so much money at stake, legal departments are already scouring proposed legislation. They’re looking for tax reduction strategies. You might call these strategies “loopholes.”

Even though tax reform won’t boost profits much, it’s bullish for stocks. Allowing companies to bring cash back at a low rate will boost share buybacks. That gives earnings a one-time boost.

In the long run, tax reform will matter. Companies will use the ability to immediately expense equipment to zero out taxes some years.

But accountants will still depreciate equipment to even out earnings.

The bottom line is tax reform will boost the accounting gimmicks companies use. It will also lower federal tax receipts. But it’s not going to help investors very much in the long run.