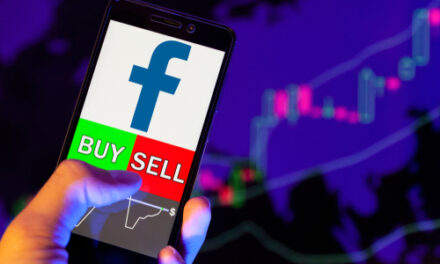 All of its services were down, including Instagram and WhatsApp.

While consumers will show their frustration by slamming the company, ultimately it’s unlikely many users will actually leave the platform.

There’s only a handful of social media platforms that exist, and it’s not as apples to apples as it may seem.

Each platform has a unique feel and user experience which has kept loyal users sticking to their favorites.

A simple outage, long and disruptive as it was, won’t have those users fleeing to the competition.

You wouldn’t know it from looking at FB’s stock price, though. News of the outage sent the stock down nearly 4% on Monday.

With the drop on Monday, it brings the current pullback in the stock to 15%. So the million dollar question is where does it go from here.

And for that, we’ll turn to the chart because, if you’ve followed me at all now, you know price is the most important part.

And the price chart tells us everything we need to know about the price action. 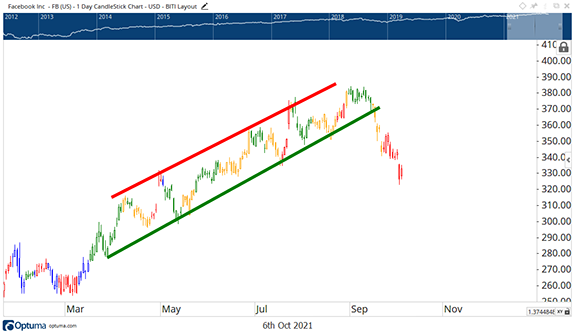 You can see the clear rising price channel the stock was riding in, with the green line acting as support and the red as resistance.

But shares broke below that channel during this pullback… leaving FB in no man’s land as it searches for a bottom.

On the chart, you’ll also notice I left my favorite charting tool on there as well, the Relative Rotation Graph.

I use a uniquely tuned version of the RRG as my Profit Radar in the markets.

And right now, it has shares of Facebook sitting in the lagging quadrant, as noted by the red candlesticks.

Some view this as a sign of concern… since it’s lagging the overall market.

But after years studying this type of chart, I can tell you this is NOT a bearish sign.

In fact, this has been a bullish sign more times than I can count.

That’s because stocks in the market go through a natural rotation cycle: lagging the market, then improving (blue on the chart), to leading (green), before it weakens (yellow) and comes back to lagging once again (red).

Then we go through it all again.

Now, if you know this is the normal cycle for a stock, then the lagging section doesn’t scare you.

On the contrary, it gets you excited.

I’m not looking long-term here… strictly over the next few weeks or months.

But Facebook was severely punished the past couple weeks. It’s a stock you want to play the bounce on.

And the best way is with options.

A strike is out-of-the-money for a call option if the strike price is above where the stock is currently trading.

To figure out if it makes sense to use, you need to know your expected move of the stock. I’m looking for Facebook to bounce back near their recent highs, which would send the stock to around $375 per share in the coming weeks.

After sharp drops like this, and particularly with higher-priced options, you can get away with buying out-of-the-money options.

In this case, it means you could scoop an out-of-the-money option for about half the price of the at-the-money strike price.

Chart of the Day:
A Juicy Breakout Play in the Making 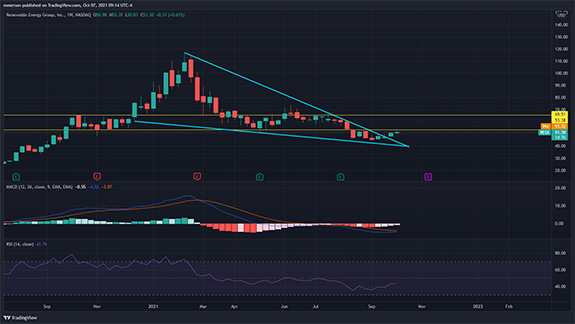 This chart of Renewable Energy Group (REGI) is one of the juiciest falling wedges I’ve spotted in a while.

This renewable biofuel company seemed to make its biggest ascent just as the ESG (environmental, sustainable, governance) fad was hitting a fever pitch at the beginning of 2021. Since then, it’s lost more than half of its peak value.

Now, though, REGI seems to be breaking out of a VERY long falling wedge pattern…

The MACD is about to make a bullish cross. And it’s spending this week testing its long-term horizontal support/resistance line.

This is a weekly chart, so keep in mind patterns we spot here tend to play out over weeks and months. If REGI can break that $53 handle in this week’s trading, that’s the kind of evidence I’d need to call this a trend change.

The bravest among you could get long call options now as a speculation. I’d personally wait to see how it does with that bottom yellow line before getting aggressive. 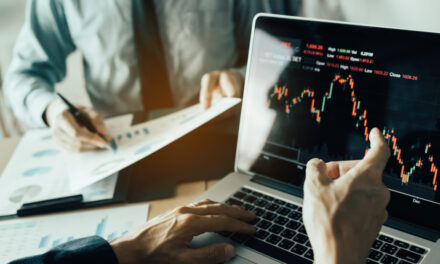 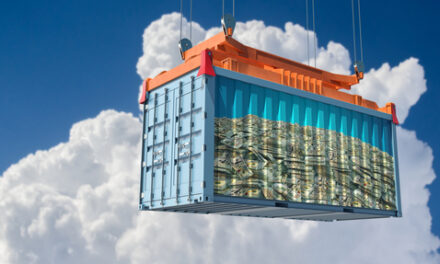 How I Used ETFs to Move $40 Million a Day