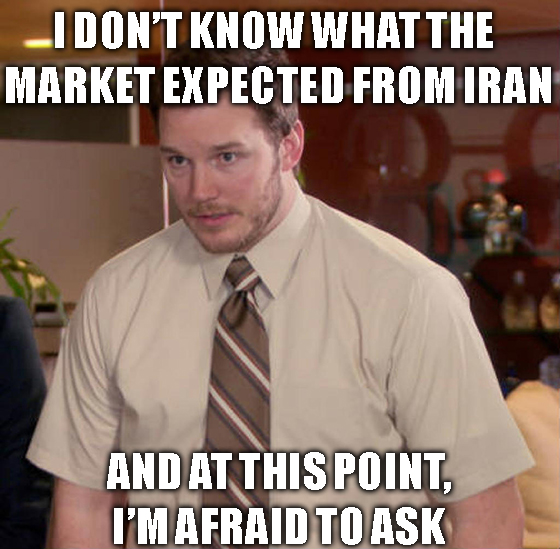 The funny thing about stock market sentiment? It applies to literally everything.

For example, today I find myself discussing the bullish and bearish implications of last night’s Iranian missile attack. According to the financial media, Iran’s retaliation for the U.S. killing Qassem Soleimani, a top Iranian military official, was deemed “less than feared.”

Less than feared. It reminds me of “less than expected,” as if the Iranian missile strikes on U.S. military bases in Iraq are in some way similar to corporate earnings reports. And honestly, in a cold and calculated way, they are.

Wall Street clearly expected a much larger response from Iran. Stock futures plunged on the initial news. But after President Trump sounded the “All is well!” on Twitter last night, the situation quickly normalized.

With their minds now somewhat at ease, investors turned toward the ADP and Moody’s Analytics U.S. private payrolls report. According to the report, the U.S. added 202,000 jobs in December, outstripping the expected 150,000 new payrolls. (No, not that kind of “outstripping,” Elon.)

Gauging expectations on bombs and jobs … what a start to the year.

On Monday, I half-joked about entering a new market cycle on Wall Street: the Iran War Cycle. I even made a chart for it.

But I never expected it to actually play out. And yet, that’s exactly what happened this week. Monday was a market sell-off on war fears. Tuesday hinted at a resolution (i.e., Trump’s reassurance that everything would be fine), and the market bounced back by the end of the day.

Last night, we were at the “no progress is made” step — right before the Iranian missile attack. The market sold off … until Trump “hinted at a resolution” by stating: “All is well!”

In less than 48 hours, we completed the entire cycle. I don’t think my blood pressure can take months of this like we saw during the trade war cycle.

Clearly, keeping up with this kind of pace is impossible for all but the nimblest of investors. So, what’s an average Joe to do?

If you’ve got the cash and the nerves of steel required to trade the ups and downs of the “Iran War Cycle,” you could attempt to time this market. I wouldn’t recommend it, though. You’re going to eat a lot of Tums.

So, why put yourself through so much stress when there’s a much simpler answer?

The much simpler answer lies with none other than Banyan Hill’s own Charles Mizrahi.

In his Alpha Investor Report, Charles is upfront about showing you where average Joes and Janes often go wrong when investing. Instead of timing some wiggles and jiggles on a chart, Charles targets sound, well-run companies set to soar — no matter what’s going on in Iraq, Iran or Never-Never Land.

For Charles Mizrahi, investing doesn’t get any more complicated than buying the right stocks at the right time … and simply letting your money work for you.

And if this no-nonsense approach strikes a chord with you, you’ll love the wit (and picks) that Charles and company pack into each issue of Alpha Investor Report.

Click here to find out how you can start with Charles’ very next newsletter! 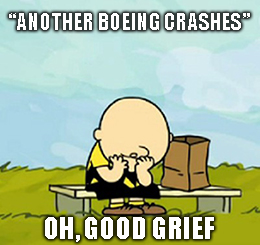 I’m actually starting to feel kind of bad for Boeing Co. (NYSE: BA) at this point. OK, not really…

But my thoughts do go out to the 176 people who died yesterday after a Boeing 737-800 (not a Max) crashed after taking off from Tehran, Iran, on its way to Kyiv, Ukraine.

As of this writing, the cause of the crash is unknown. But the fact that another Boeing aircraft just went down isn’t good for the company’s credibility. Boeing already faces serious production delays for the 737 Max. It’s even considering taking on more debt to pay back both the families and airlines affected by the Max debacle.

If the 800 series is called into question, that puts two of Boeing’s airplanes on the sidelines as its debt levels rise. That’s not a good outlook for any company — I don’t care who you are.

For now, BA shares are down roughly 2%. We’ll have to wait for the investigation on this crash to find out just how severe the ramifications will be this time around.

Better: Drink ’Em If You Got ’Em 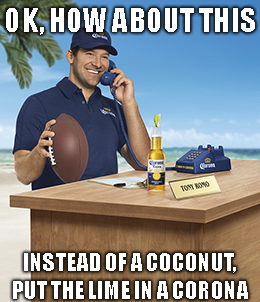 Now I need a drink … and apparently most of the country does as well.

Beer was king. Constellation said sales of the adult beverage hit $1.3 billion for the quarter. That’s a lot of beer, and it wasn’t just Corona. The company said that Modelo Especial “grew depletions by almost 15%.” Depletion is brewer jargon for how quickly the beer moves from the distributor to your local retailer.

But beer isn’t the future for Constellation. The company is launching Corona Seltzer later this year to capitalize on the new (and disgusting) “Zima trend” in adult beverages. Apparently White Claw-style drinks are what people want these days, as the company boosted its full-year cash flow expectations and earnings outlook.

Y’all enjoy your alcoholic water. I’m going back to my bourbon now.

Best: The Battle for Meatless McDonald’s 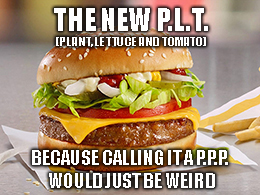 Shares of Beyond Meat Inc. (Nasdaq: BYND) soared more than 12% yesterday. Apparently, the stock was riding the meatless coattails of chief rival Impossible Foods, which unveiled fake pork at the Consumer Electronics Show this week. I wonder if they’ll make an iPhone out of that?

Today, however, Beyond Meat is making its own way higher. Both Impossible and Beyond were fighting for a coveted spot on McDonald’s Corp.’s (NYSE: MCD) menu. That fight is reportedly all but over.

Impossible has pulled out of the McDonald’s competition. “It would be stupid for us to be vying for them right now. … Having more big customers right now doesn’t do us any good until we scale up production,” CEO Pat Brown told Reuters.

Beyond, however, says that talks “are going well.” Apparently, Beyond Meat believes it’ll be able to keep up with production demands for a McMeatless burger.

By the way, McDonald’s is calling the new fake-meat sandwich a PLT, or plant, lettuce and tomato … which makes my head hurt because tomatoes and lettuce are both plants! So, it’s basically a PPP sandwich. But I digress…

After today’s news, BYND shares added another 5% before coming back to earth. Despite this impressive two-day rally, BYND is still 64% away from its July 26 all-time high.

And now for a break from the market: 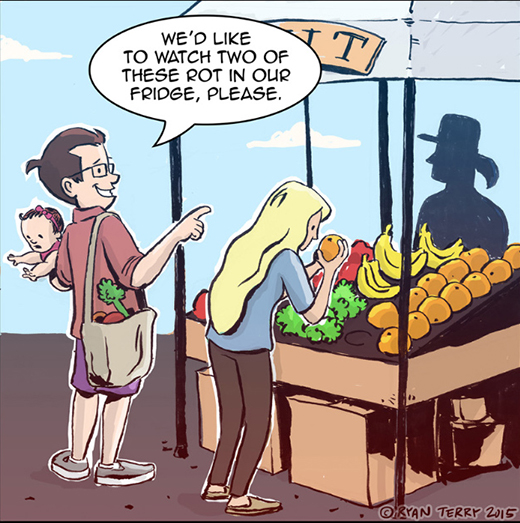 “We like oranges!” they said. “We promise we’ll eat them,” they said. The three strange gray orbs in the back of my refrigerator this morning said otherwise. My children, dear readers. 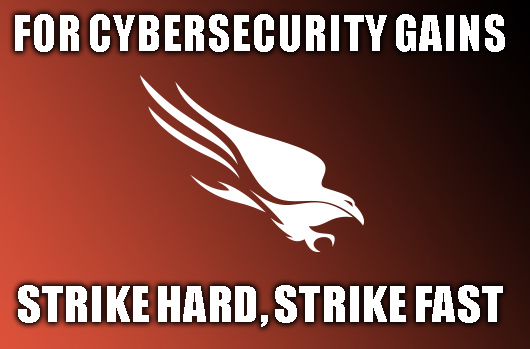 The financial media say you missed your chance to chase the run-up in defense stocks where the U.S. and Iran are concerned. That may be true for Raytheon Co. (NYSE: RTN) and Northrop Grumman Corp. (NYSE: NOC), but this is the digital age.

In that same Statista survey, 32.7% of respondents said their online accounts were hacked, but 80% thought that they were very well protected against such online attacks. Now, I’m no math wizard, but those figures just don’t add up.

That’s a potentially costly math mistake, as Cybersecurity Ventures predicts that cybercrime will cost the global economy $6 trillion annually by 2021.

Clearly, it’s past time to invest in those combating this global epidemic. There’s one company that’s poised to not only help take a bite out of cybercrime, but grow considerable returns for your portfolio at the same time.

That’s a lot of technical jargon that basically means CrowdStrike specializes in cloud-based security threat management, detection and prevention. And, as we all know, the cloud is where everything lives now.

That’s impressive and all, but how are CrowdStrike’s financials? Well, in the past three years, revenue rose more than sixfold. What’s more, since the company’s public-trading debut last year, it’s met Wall Street’s earnings expectations once and beaten twice.

In the most recent quarter, CrowdStrike said subscription revenue surged 98% year over year, with total sales climbing 88%. Now, putting everything on the table, CRWD shares fell in December after the company offered up guidance that was below expectations. But CrowdStrike was being conservative, and it certainly didn’t expect the current situation with Iran.

According to Texas Governor Greg Abbott, state agencies have seen a surge in cybersecurity threats originating from Iran. In fact, Abbott reports that more than 10,000 attempted attacks per minute were detected in the 48 hours just after the U.S. airstrike on Qassem Soleimani.

That’s just insane! It underscores the ever-increasing need for CrowdStrike’s services, and I would expect the company to either lift its guidance in the coming months or blow past Wall Street’s earnings and revenue expectations due to increased demand.

Finally, while CRWD shares rallied in the wake of the Iranian situation, they’re still far below their all-time highs — about 45% below. The stock is also about 29% below analysts’ consensus price target of $78.

In short, CrowdStrike stock is cheap … and unlike that rally in defense stocks that you missed out on, CRWD still has room to run.