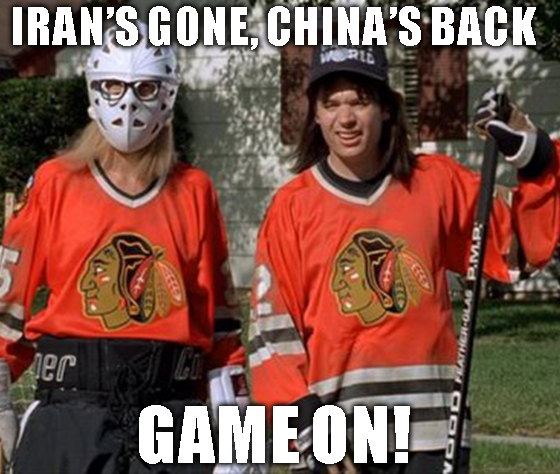 So, the latest Iranian conflict turned out to be a great big nothing-burger.

We had an Iran War Cycle for about 48 hours, and then the whole thing was over. R.I.P. my nifty little chart.

Today, Wall Street’s new hotness is the partial U.S.-China trade deal. You thought that was all settled and done, didn’t you?

Well, it is, but … neither the U.S. nor China has signed the bloody papers yet. In fact, China was largely quiet on the whole signing thing until this morning.

According to China’s Commerce Ministry, top trade negotiator Vice Premier Liu He is heading to Washington to put his John Hancock on the “phase 1” agreement.

And there is much rejoicing on Wall Street. Both the Dow and the Nasdaq hit fresh all-time highs today, with the S&P 500 not far behind.

With Iran behind us (hopefully) and the phase 1 China trade deal set to be signed (also hopefully), it’s “game on” again for the bull market.

The market is rallying across the board — except for retail stocks … but we’ll get to that in a minute.

There are lessons to be learned from all of this. Lessons that I’ve harped on since I started writing Great Stuff.

What are those lessons, oh Mr. Great Stuff?

By following these two simple rules, you can be as bullish or as bearish as you want.

You can go full-bore “there is no recession” like Paul . He’s got the right investment mindset for the right companies that’ll do well regardless of Trump’s actions. I honestly believe this.

I know many Great Stuff readers absolutely love Paul’s services. Profits Unlimited is an amazing publication. If you aren’t already signed up, I recommend you click here to find out more!

But you still need a safety net. If you’re already scarfing down gains trading with Paul’s research and recommendations, why not add a more conservative approach to your toolkit?

Something like Ted Bauman’s The Bauman Letter. I’ve said it before, and I’ll keep saying it: Ted is a no-nonsense, conservative investment analyst with his readers’ best interests at heart.

So, add some diversity to your knowledge toolbox today. 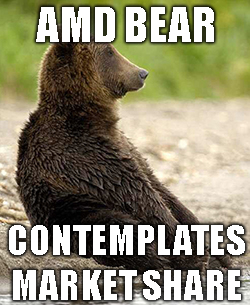 Mizuho Securities analyst Vijay Rakesh upgraded AMD to buy from neutral this morning. Rakesh believes that there’s rising optimism toward AMD’s server business and that results in 2020 could be stronger than expected.

If this all sounds familiar to you … it is. Rakesh appears to be finally catching up to what AMD bulls have been saying for the past year.

Next year, Mizuho might even start talking about the potential for AMD to gain market share in the laptop space with its latest high-speed, low-power Ryzen chipsets. (Those were announced at the Consumer Electronics Show this weekend.)

If you’re an AMD bull, the upgrade is good news. If you’re not already invested in AMD, the stock is sure to dip a bit on profit-taking and price resistance near $50. However, another upgrade like today’s could push AMD north of $50 … and that could put a bind in bears’ shorts, literally.

More than 9% of AMD’s float (or shares available for public trading) is sold short by people betting against the stock. A move above $50 could force these bears to buy back their positions to avoid heavy losses. That’s hidden rally fuel for AMD right there.

The Bad: Selling Some Grub 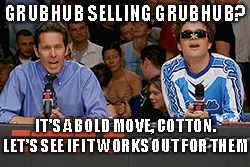 What do you do if you can’t make enough money selling your particular services? Why, sell yourself, of course. (Get your mind out of the gutter!)

Reports emerged yesterday that food delivery service Grubhub Inc. (NYSE: GRUB) was “looking at strategic options.” Those words only mean one of two things on Wall Street: Grubhub is for sale, or it wants a merger. Potato, potahto.

The report remains unconfirmed, however, as Grubhub told Barron’s that “we do not comment on market rumors or speculation.” Which is what you usually hear when something is at least partially true.

The delivery game is a competitive one, and Grubhub is up against rivals DoorDash, Postmates and Uber Eats from Uber Technologies Inc. (NYSE: UBER). With every one of these companies offering deals and incentives to attract customers, profits have been hard to come by.

GRUB investors are hurting as a result, with the stock down more than 62% from its August 2018 highs. A buyout or a merger could be just what these investors need to put a salve (or some mayonnaise) on those wounds.

The Ugly: Bloodbath & Beyond 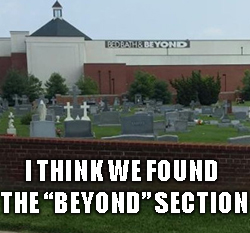 You know that retail story about how mall-based retailers are the only ones at risk? The one that says that stand-alone retailers will do just fine? Yeah … about that.

Bed Bath & Beyond not only missed third-quarter earnings and sales expectations, it pulled its fiscal 2019 guidance. “Our performance in the third quarter was unsatisfactory,” said CEO Mark Tritton in the understatement of the year.

Kohl’s, meanwhile, reported a 0.2% decline in holiday sales from last year and put fiscal 2019 earnings expectations below the consensus. Looks like that deal to handle returns for Amazon.com Inc. (Nasdaq: AMZN) didn’t pan out like it expected.

Finally, J.C. Penney said that same-store sales plummeted 7.5% during the holidays. That’s bad. Even when the company adjusted those figures to account for the fact that it doesn’t sell appliances or furniture anymore, sales still fell 5.3%. And the company said it expects 2019 comparable-store sales to fall between 7% and 8%. That’s worse.

It looks like the retail apocalypse is still on, dear readers.

First, let me thank you for the flood of comments this week. It warms my cynical heart that so many of you decided to write in to Great Stuff at GreatStuffToday@banyanhill.com.

Second, you guys are just as cynical and twisted as I am. Take Graham S.’s comments on the growing meatless trend, for example:

I enjoy your lighthearted approach to economic news — thank you!

Feedback: We are told that much of the 24 to 25 million hectares of Amazon ex-rainforest is now devoted to GM soy production, a prime ingredient (along with all the chemicals) in meatless meat, so all the yuppies supposedly saving the world from animals’ “real meat” are losing the rainforest and eating the added chemicals … contributing to, yes … climate change!

Of course, you can’t taste the difference when there’s all that tomato ketchup/sauce, cheese, salad and +++ in that burger!

I hear you on that ketchup/sauce on the soy burgers. You gotta flavor that stuff with something, though. On the bright side, if we’re using former rainforest land to produce soy for fake meat, that means less gas from cows, right? I hear that’s a thing, which is nice.

I couldn’t keep track of all the award shows, even if I wanted to. (I don’t.) It seems all of them are just reasons to give themselves a pat on the back. (They need it.) That, and a reason to show off how well dressed and beautiful they are. (They aren’t.) If some form of media is interesting and enjoyable to me, I will vote for it with my wallet, regardless of how many little statues it was given by some group of clowns. (Think of Bozo.)

You know I don’t watch award shows (they’re awful). They’re very self-aggrandizing (look at the big brain on Brad!) for the industry. I also vote with my wallet (look at the cobwebs). Thanks for writing in, Galacami! (Seriously, thanks!)

Finally, we have cat lover Hap B. and his defense of singing anthropomorphic felines:

Cats is a great movie.

Why it bombed the way it did is beyond my understanding.

I think that if you saw it 40 years ago on Broadway and loved it, you are probably delighted with the movie.

The movie goes faster than the stage production did, and the storyline is much easier to grasp.

I’ve been known to enjoy a musical or 10 in my time … but digitally enhanced, singing cat people give me the heebie-jeebies. Seriously, if I want to talk to cats, I’ll move to Colorado, Illinois or some other state that has legalized cannabis. But, to each his own.

I like what you write too, Hap. Thanks for the feedback!