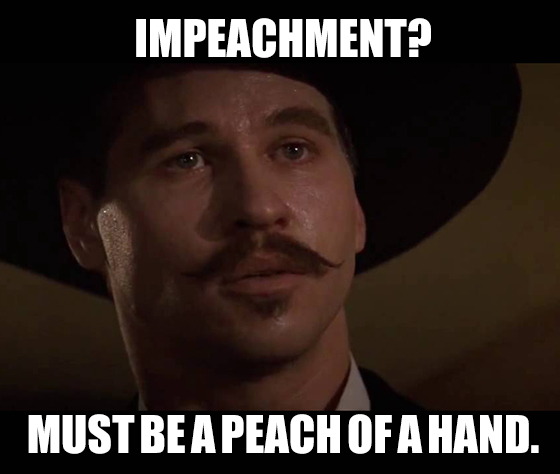 The impeachment of President Donald Trump has begun.

House Speaker Nancy Pelosi announced a formal impeachment inquiry into the president late yesterday. And it only took a public shaming from presidential hopeful Senator Elizabeth Warren over the weekend to make it happen.

That’s about all the political commentary on this you’re going to get from me. Some Great Stuff readers like Trump, some don’t. That’s your prerogative.

When it comes to your finances and growing your wealth, I’m politically agnostic.

That’s the way any good source of financial information should be. As Joe Friday would say: “Just the facts, ma’am.”

If you want more political discourse, there are plenty of other places on the internet you can visit to get your particular brand of spin. Great Stuff will have none of it, thank you very much.

So, just what are the facts of this situation?

Both sides will be so caught up in the impeachment process that literally nothing is going to get done.

That bill on reining in drug prices? Not going anywhere.

Decisions on the United States-Mexico-Canada Agreement (USMCA) — aka, the new NAFTA? Forget about it.

A U.S.-China trade deal? Highly unlikely at this point.

In fact, most of the market’s early losses this morning can be attributed to this last point … and not the president’s impeachment.

Wall Street cared little when President Bill Clinton was impeached back in 1998. The initial reaction was quite the same: The Dow fell 0.8%, the S&P 500 sank 1.4% and the Nasdaq plunged 4.8% — similar to today’s knee jerk.

But those losses were quickly recouped and then some. By the time the House voted to impeach Clinton, the market was sitting on a double-digit rally.

What’s more, Wall Street is already recovering from the shock. The major market indexes were back in the green at the time of this writing.

Remember, Wall Street hates uncertainty more than anything. Investors have just been given a rather large dose of certainty — congressional gridlock.

So, put impeachment out of your head for now. The China trade deal is the real story, and we’re looking at more of the same on that front for quite a while. 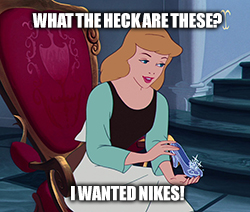 How do you deal with trade war pressures? You outrun them.

China was a major concern for analysts heading into the report, since roughly a quarter of Nike’s production is centered there. However, Chinese sales surged 22% despite poor U.S.-China relations.

So, how did Nike accomplish this feat? Girl power.

Nike outfitted the U.S. team at the FIFA Women’s World Cup this past summer, along with another 14 of the tournament’s 24 teams. Three of the four semifinalists also sported Nike gear.

Nike doubled down on the exposure and launched an ad campaign titled “Dream With Us” that helped set records for soccer jersey sales. Additionally, the “Dream Crazier” ads narrated by Serena Williams also provided a shot in the arm for sales of women’s products.

Wall Street is so shocked by the performance that NKE shares are breaking out to fresh multiyear highs today.

The Bad: You’re Not the One, Nio 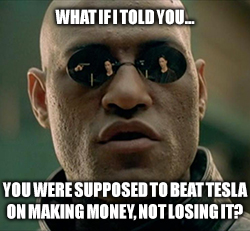 If you listen to the financial media, you probably think that beating Tesla Inc. (Nasdaq: TSLA) at the electric vehicle game is easy.

As it turns out, beating Tesla at its own game isn’t as easy as everyone thinks … even with the backing of the Chinese government. NIO just reported quarterly earnings that were so bad, the company canceled its earnings call.

So, just how bad was it?

Nio said losses surged 80% to $462 million on the quarter. Total losses have surged to $5 billion in the five years since Nio began operating. By comparison, it took Tesla 15 years to hit that target.

What’s more, due to recalls, vehicle margins have cratered to  -24%. In other words, NIO loses $0.24 on every dollar spent making electric vehicles.

With those kinds of “returns,” I can understand why management canceled their conference call. I wouldn’t want to talk to investors either after that performance. Especially if I’d accepted $1.45 billion in aid from the Chinese government.

The Ugly: We, Not Me 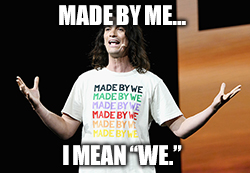 Apparently, placing yourself as the “god emperor” of a company is not tolerated in the initial public offering (IPO) market any more.

WeWork CEO and founder Adam Neumann is stepping down. Pressure built in the past week, as investors raised concerns at SoftBank, WeWork’s cash cow and biggest stakeholder.

You’d think that losing $1.9 billion last year would have been enough to dissuade investors, but it took some rather sketchy CEO powers to eventually spark a revolt.

Neumann isn’t gone, not by a long shot. He remains WeWork’s chairman, but his position now allows for more “We” and less “Me” at the company.

For starters, his special voting shares have been neutered — cut from 20 votes each down to just three. Company control will also now be decided by the board should anything happen to Neumann … instead of the nepotistic appointment-by-wife scenario that was formerly outlined in WeWork’s S-1 filing.

What all of this means for WeWork’s IPO remains up in the air. The company could still go public. In fact, I would bet money that it will. SoftBank needs to recoup some of its investment in WeWork.

You can bet, however, that once it does, it will be at a shadow of the $47 billion valuation the company had earlier this year — and that could present a real opportunity for investors. 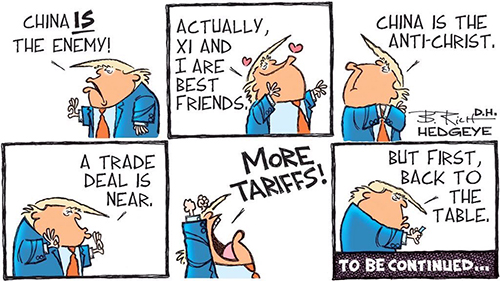 Is it just me, or is the U.S.-China trade war cycle speeding up again? We’ve gone from the great possibility of a deal in October back to a hard-line stance on “I will not accept a bad deal” in just under a week.

Today, we have this quote from Chinese Foreign Minister Wang Yi:

China has no intention to play the game of thrones on the world stage. For now, and for the foreseeable future, the United States is and will still be the strongest country in the world.

I think it’s too late to back out of this “game of thrones,” Mr. Wang. At this point, I’m just worried about who’s going to be Ned Stark at the end of this season … and I’m worried it will be the U.S. consumer. 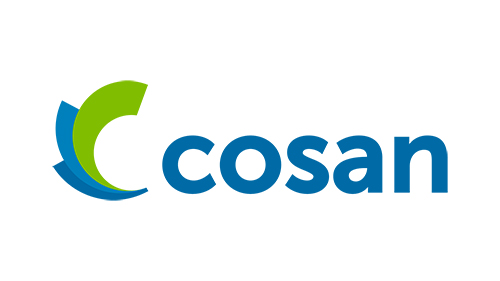 The energy market is changing.

Renewables and sustainable energy are in, while old fossil fuels are being phased out. That’s not to say that oil is dead, but the world is headed in that direction … eventually.

While the globe moves to things such as solar, wind and geothermal power, there’s going to be a transitional period. One where oil is slowly phased out with biosimilar renewables. That’s where today’s Great Stuff pick of the week comes in.

But while the sugar business is booming — I’m sure I’m providing a major source of income with all the doughnuts I eat — the powdery confectionary is so much more than a sweetener.

After extracting what we know as sugar from sugarcane, Cosan takes the leftover materials (bagasse) and uses those to produce biofuels to generate heat, energy, electricity and manufacture pulp for building materials. Among those biofuels is one I’m sure you’re familiar with: ethanol.

Cosan hit it big with this idea. So much so that the company owns and operates fuel distribution centers throughout its native country of Brazil via a partnership with Royal Dutch Shell PLC (NYSE: RDS.A).

So, just how big a deal is Cosan?

The company is the largest sugar exporter in the world. Its joint fuel distribution venture with Shell is the fourth largest in Brazil by revenue and the second largest by fuel distribution.

As for CZZ shares, Wall Street has already realized Cosan’s potential. CZZ is up more than 127% in the past year. Despite that run higher, the stock’s price-to-earnings ratio rests at a moderate 27.69. In short, CZZ is undervalued compared to its industry peers.

In other words, Cosan has plenty of room to run higher. And with the world’s energy market shifting toward renewable energy, you can bet it will.