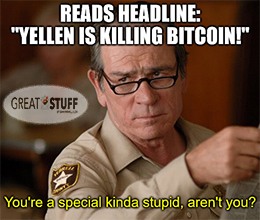 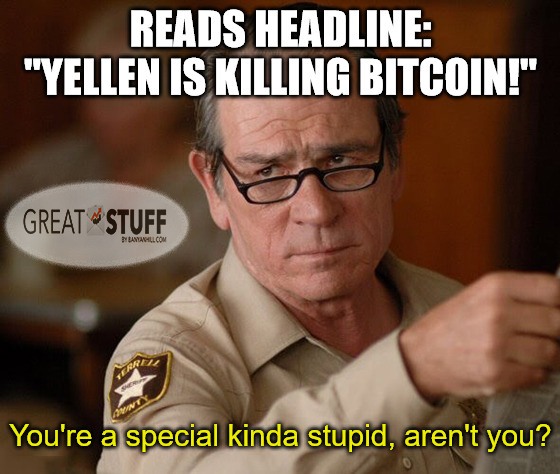 I have a bone to pick with the Wall Street “hype machine” today … so let’s talk about bitcoin.

You got that right, sister. In case you didn’t notice, bitcoin (BTC) plummeted 27% in recent weeks. Part of this decline is profit-taking. I mean, BTC did gain more than 200% last year!

On Tuesday, Janet Yellen — former Federal Reserve head and President Joe Biden’s pick to lead the Treasury Department — was asked about cryptocurrencies during her Senate confirmation hearing. Her response had the mainstream financial media in a tizzy, generating headlines like:

If you actually read these articles, you’ll see the authors walk back those outlandish headlines … eventually.

Why? Because Yellen said nothing of the sort. Here’s her actual response from the transcript:

I think it important we consider the benefits of cryptocurrencies and other digital assets, and the potential they have to improve the efficiency of the financial system. At the same time, we know they can be used to finance terrorism, facilitate money laundering, and support malign activities that threaten U.S. national security interests and the integrity of the U.S. and international financial systems.

I think we need to look closely at how to encourage their use for legitimate activities while curtailing their use for malign and illegal activities. If confirmed, I intend to work closely with the Federal Reserve Board and the other federal banking and securities regulators on how to implement an effective regulatory framework for these and other fintech innovations.

No talk of getting rid of cryptocurrencies or bitcoin. And nothing whatsoever about being “mainly used for illegal financing.” Seriously, Business Insider … clickbait much?

From Yellen’s comment, you can see that she wants to work with cryptocurrencies — not ban them. To establish oversight and expand upon bitcoin’s legal uses — not vilify cryptos altogether.

Honestly, the negative hype behind this one statement was completely irresponsible. Especially when you consider the major banking giants of the world already do exactly what fearmongering headlines claimed about bitcoin and cryptocurrencies.

I’m looking at you, Capital One and Deutsche Bank. What’s in your wallet? El Chapo’s cash, probably.

Next up, the misinformation. Shortly after the Yellen sensationalism came news of a bitcoin “double-spend.” As the words suggest, double-spend is when you spend the same bitcoin twice. Such a flaw in bitcoin would make the cryptocurrency completely worthless, and BitMEX Research claimed it detected just such a transaction.

But it never happened. According to Jason Lau, COO of OKCoin exchange:

The bitcoin “double-spend” media headline has certainly spooked investors, but it’s a misunderstanding of how the Bitcoin network operates. In this case, a chain reorganization of one block occurred, which is a fairly common occurrence.

What BitMEX saw was a standard reorganization of bitcoin’s blockchain — the technology underlying all cryptocurrencies. The same bitcoin was registered in two wallets, but only one was valid, and blockchain tech would’ve rejected any attempt to spend this supposed second coin. For a more in-depth explanation, click here.

So, Great Ones … what can we take away from today’s lesson? How about: “Don’t believe every media headline,” and “Do your research.”

Seriously. It doesn’t hurt to know more about an investment before you dump cash into it. And this is doubly true with bitcoin and cryptocurrencies in general due to their complex technology.

As G.I. Joe always says: “Knowing is half the battle.”

Well, when it comes to cryptocurrencies … Ian “The Crypto” King has half the battle already won.

Unlike many traders who claim to be “experts” in cryptocurrencies, Ian doesn’t just talk the talk, he walks the walk, teaching students how to trade cryptocurrencies through his popular training courses for Investopedia.

And in New Wave Crypto Fortunes, Ian will show you little-known opportunities that could hand you profits that are 5 … 10 … even 40 times bigger than bitcoin over the next five years. Click here to learn more!

No. 1: Assessing the Assessment 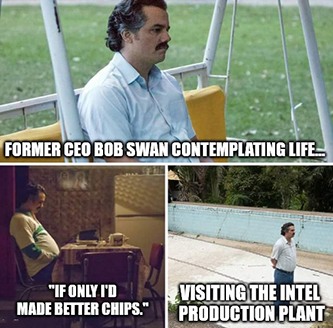 How do you ruin a beat-and-raise quarterly report and a dividend hike? Just ask Intel (Nasdaq: INTC).

The company’s per-share earnings were impressive, coming in at $1.52 to beat expectations for $1.10. Revenue was also stellar at $20 billion, compared to the consensus estimate of $17.49 billion.

Intel even lifted first-quarter expectations and hiked its dividend 5%.

So, what went wrong? Why is INTC down more than 8% today?

A lack of details on manufacturing — Intel’s Achilles’ heel. Incoming CEO Pat Gelsinger said he was “pleased with the progress” to correct internal manufacturing issues but that Intel would look toward expanding its “use of external foundries.”

Then, Gelsinger punted like the Bengals with the game on the line in the final two minutes. He said that he would “provide more details on this and our 2023 roadmap once I fully assess the analysis that has been done and the best path forward.”

The report itself indicates that Intel is doing well fundamentally. Furthermore, the company is on track to expand that success into the rest of 2021. However, investors (and myself, to be honest) expected more information on manufacturing issues and less corporate BS — especially from a tech guy like Gelsinger.

Don’t worry, Great Stuff Picks readers. Your INTC trade is still up, and once Gelsinger fully takes the reins, Intel will prosper. 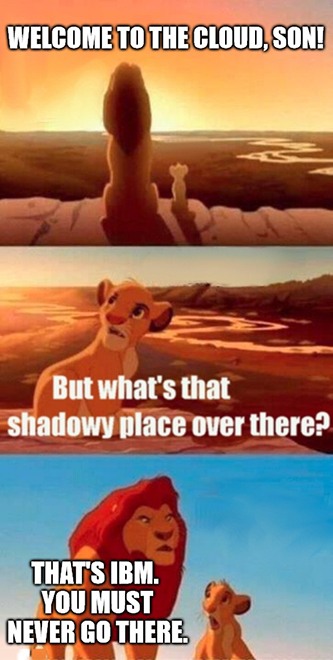 Sticking with the tech sector, IBM (NYSE: IBM) reported its quarterly results today and, much like we anticipated on Monday, not a whole lot happened for Big Blue last quarter … and that’s precisely the problem.

New CEO Arvind Krishna has tried to pivot IBM away from its legacy as your grandpappy’s server biz, instead eyeing those lucrative cloud-based enterprise heights.

So far, no good. This marks the fourth straight quarter that IBM lost revenue, coming in at $20.37 billion to miss estimates for $20.67 billion. This was also IBM’s sharpest revenue dive in five years.

The company blames a “shift in clients buying behaviors and priorities” over the past year, though you and I both know that rumors of IBM’s demise are far from exaggerated.

CEO Krishna is still optimistic, however, saying: “I want to measure the company on revenue growth.”

Yeah, that might be a good idea, Krishna … since everyone else measures IBM by revenue loss. 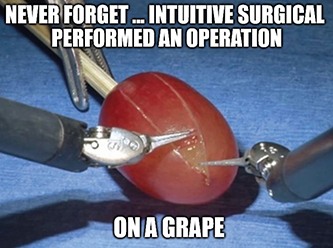 Intuitive makes a line of robotic-assisted surgical systems called the da Vinci. (Because the precise nature of surgery is a fine, delicate art … or something?) Also, Intuitive Surgical? Is this a cut-by-feel, “my gut is my guide” kinda operation?

Anyway, surgeons can wield these robot helpers to better perform minimally invasive ops — it’s easier on the doc and the patient’s recovery.

What’s also easy is that the devices practically printed money for Intuitive Surgical in the fourth quarter. Earnings per share came in at $3.58, crushing estimates for $3.12. Revenue ticked up 4%, also beating estimates.

All that aside, more surgeons (and patients, presumably) are following their gut and going under the semi-robo knife. Worldwide, the number of procedures using the company’s machines rose about 6% year over year.

On the flip side, the company shipped 3% fewer surgical systems on the quarter — 326 da Vincis compared to 336 in 2019. Apparently, some pandemic got in the way of hospitals wanting to scoop up more robotic surgeon systems — who knew?

That seemed to be the deal breaker for the Street, which sent the Surgeonator stock down about 5%.

No. 4: A Secular Approach 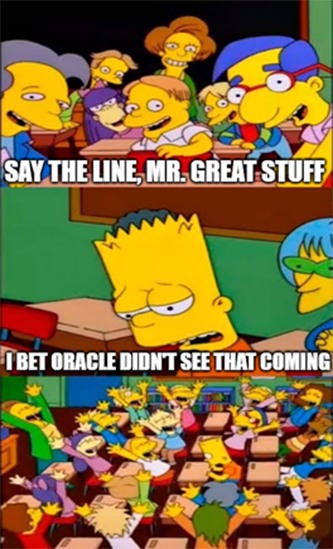 Do you mean … Oracle has trouble keeping the faith?

Maybe? Maybe Oracle just has trouble combing its hair in a pompadour, like the rest of the Romeos wore … a permanent wave, yeah!

Billy Joel? That’s where you went with that?

Anyway, the analyst jargon breaks down like this: Oracle makes middleware for companies’ networks systems. Think of it as software that makes applications and servers communicate or send data better.

(Before you Java-jiving and SQL-slinging experts write in, yes, I know this is a gross simplification.)

Well, everyone else in the enterprise game already moved on up to the cloud — everyone in the sector except Oracle, for the most part.

The company is still itching to hitch on to the cloud bandwagon. Otherwise, nobody wants the non-cloud software that Oracle sells — just ask IBM.

And over the next few years, Oracle will find itself falling precariously behind the enterprise software pack if the company doesn’t get its head in the clouds.

Would you and your hypothetical company purposely buy services that, you know … leave you behind on the remote-communication front?

In other words … secular pressure. All that sector-wide context summed up in two words. See? Some analysts are concise when they want to be.

Hey, I saw you come perilously close to clicking that X button — hold your horses!

Did you think you could just go and kick off that weekend without rambling with your pals around here? If you haven’t taken a second to do so, drop us a line with what’s on your mind — market related or otherwise!

We get all kinds of emails from your fellow Great Ones: tech rants, Elon Musk worship, Apple antagonizing, sand stock requests … anything goes, really.

Who knows? You might even see your email featured in next Thursday’s edition of Reader Feedback. We’ll catch you over at GreatStuffToday@BanyanHill.com! 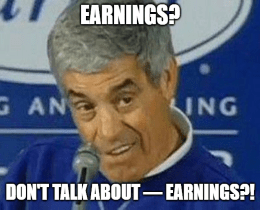 Double Servings of Earnings: A Full Plate With the FAM