Home » Investing » Currency » Bitcoin vs. Gold: Which is a Better Investment?

Bitcoin vs. Gold: Which is a Better Investment?

I can spot an Elvis fan a mile away.

I know there must be shy fans of the King out there, but apparently, they don’t wear it on their sleeves. If you’re an Elvis fan on the inside and the outside, your sartorial style will reflect it.

So it was with this bitcoin-bug.

He’d cornered me at our Total Wealth Symposium in Bermuda last year. He wore blue suede shoes, a dead giveaway. He asked my opinion of the cryptocurrency … but before I’d had a chance to respond, he told me what it should be.

“It’s the single biggest innovation in world history,” he exclaimed. Apparently writing and the wheel were small potatoes. “If you’re not into it, you’re crazy.” Jarringly, the accent was more Long Island than Tupelo, Mississippi.

“Perhaps,” I replied. “But the real question is, into it for how much?”

Events are asking you that question right now…

Bombs Away, But We’re OK

Last week I got a note from a reader complaining that I talked too much about the impact of politics on markets.

Then the governor of Guam told his fellow Guamanians not to look directly at a nuclear fireball, if one should appear courtesy of North Korea. The markets tanked.

As I was saying…

As it always does, the gold price spiked, hitting $1,294 an ounce today.

Gold has a habit of doing that. The chart below looks like an EKG rather than price movements. Up, then down … up, then down … by oddly regular amounts.

Overall, gold is up more than 12% this year … but if history is any guide, those gains will halve shortly.

Something else happened last week. Bitcoin broke the $4,000 barrier.

And unlike gold, everybody’s favorite cryptocurrency keeps trending up this year. Aside from a few blips in June and July, bitcoin is up, up and away.

If you’d bought bitcoin at the beginning of January, you’d be looking at a 300% gain. 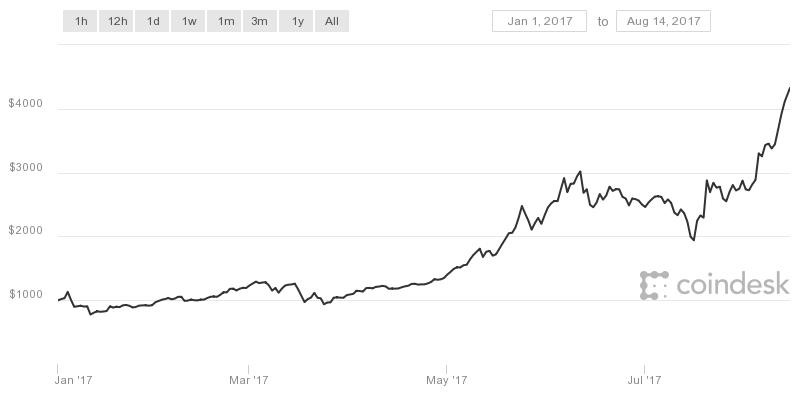 What Can You Afford: The Tortoise or the Hare?

When you call a person “volatile,” you mean he’s unpredictable.

People can be unpredictable even if they seem stable. I’ve known plenty of guys who had a werewolf-level transformation once they got a few drinks in.

When we call an asset volatile, however, it just means that its price bounces around a lot. It might even do that predictably, like the gold price.

The chart below shows the volatility of bitcoin (the blue one) and gold (the violet line) since the beginning of the year.

Even though gold’s price has seesawed like a small boat in a choppy sea, its volatility is extremely low.

By contrast, bitcoin is all over the place. That steady-looking line in the previous chart masks a lot of big day-to-day price swings … in January, April, June-July and again in August. 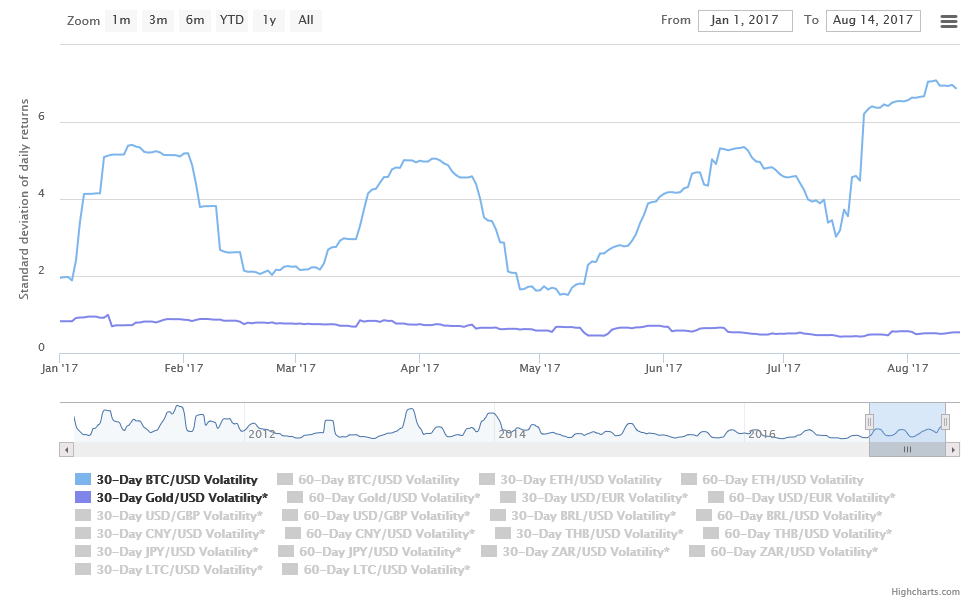 The bitcoin Elvis I met in Bermuda was getting on a bit in years. I can’t help but wonder how his metabolism has handled the cryptocurrency’s wild swings this year.

Maybe he was wealthy and it didn’t matter. But I suspect he was just like most of us … playing his wealth to make it go further as he got older. In that case I imagine he’s had a lot of chamomile tea this year. Or valerian root.

Bitcoin and gold are both primarily stores of value. Yes, you can pay for stuff with bitcoin, but most of it is in digital vaults, waiting for the price to go up.

You can pay for stuff with gold too, and most of it is in vaults as well, waiting for … well, for prices to go down. Stock prices, for example.

To me that’s the difference between bitcoin and gold.

Bitcoin is a speculative play, like industrial metals. Pieces seesaw all the time. Big jumps and big drops are part of the territory. It’s like the hare, starting and stopping constantly. Its value depends on something else … in bitcoin’s case, on sentiment.

Gold, on the other hand, is the tortoise of the investment world. It’s so steady that its purchasing power today is about the same as it was in Roman times, and even further back. Its long-term value is eerily detached from human affairs.

Ask yourself: Can you afford to ride the bitcoin roller coaster? Both financially and emotionally, I mean. Or would you have been tempted to panic sell earlier this year … only to gnash your teeth as it topped $4,000?

If you have a lot of money … more than you’ll ever need, now and in the future … go along with bitcoin Elvis. It’ll be exhilarating, for sure.

But if you’re like most of us, and you need a stable bank account and a stable emotional life, stick with gold.

After all, we know what it’s going to be worth in the future: the same as it has been for thousands of years.

Can you say the same for bitcoin?

Editor’s Note: In his special Privacy Code 2.0 report, Ted shows you how to protect your privacy assets — and explains why they’re worth more than your stocks, bonds and real estate holdings combined. There are five of these assets on your smartphone right now … and if they were stolen, someone who knows what they’re doing could ruin your life financially … or worse. To learn what you can do to keep your private information safe, click here.

Investing in AMD May Be a Smart Long Term Play