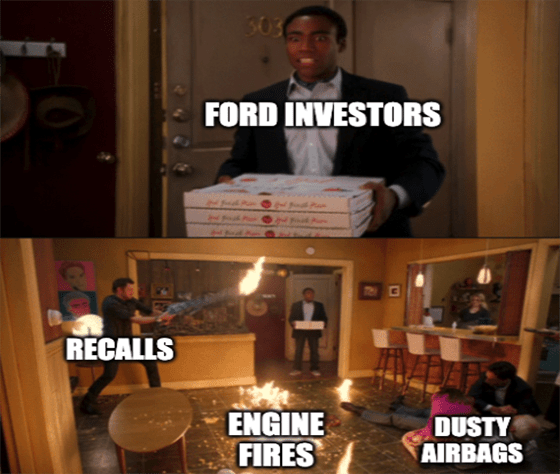 Light My EVs In A Daze

All I want … is for you to make electric cars that don’t spontaneously combust. Is that so hard?

Wait, when did the Stones talk about electric cars?

Hmm, must’ve been a B-side…

If you couldn’t tell, Ford (NYSE: F) just decided that it was high time for another episode of EV Days — the battery-powered electric vehicle (EV) soap opera that has Wall Street and Great Ones alike utterly obsessed.

The nonstop drama as EVs take off (or fail) … the tit-for-tat competition between Tesla (Nasdaq: TSLA) and, well, everyone that isn’t Tesla … what’s not to love?

In today’s episode of EV Days, Ford finds itself in familiar territory: a place we call … Recall Land.

Thank you, I thought I was gonna have to provide the dramatic music myself. First up, Ford is recalling 464 Mustang Mach-Es due to a software issue that “can cause unintended acceleration, deceleration or a loss of drive power.”

Lovely. Mustangs randomly accelerating or decelerating? Is that … different from what Mustang drivers usually do?

About 310,000 heavy-duty trucks from Ford’s non-EV lineup were recalled because — get this — dust might get trapped in the air bag wiring, possibly preventing the air bags from inflating in a crash. But … that’s still not all.

The Big F’s last recall is for 39,000 2021 Expeditions and Lincoln Navigators … because the engines can catch fire. Yes — even when the car’s turned off and not running.

Don’t worry, though: While Ford has no idea what’s causing the fires … it has a plan of action. Parking outside. It’s not a great plan, but it is a plan. Can’t burn down your garage if your car is burning in the middle of the street, eh? 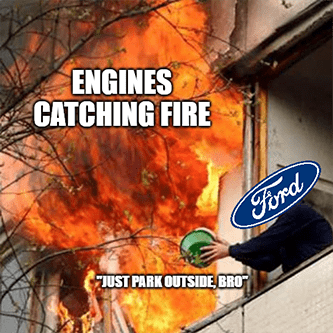 If all this sounds familiar, you might remember General Motors (NYSE: GM) facing the same burning predicament over its Chevy Bolts. The solution back then? Park outside. Man, Ford must’ve been looking back at GM’s playbook for everything.

Hang on a second … only one of those recalls was an EV problem! Where’s the rest of EV Days?

Glad you asked! While Ford finds its footing amid the fiery fretting, Lucid Group (Nasdaq: LCID) is bringing its EV lucidity to Saudi Arabia.

No, that’s not a typo. Lucid’s first overseas manufacturing plant will be in Saudi Arabia and will pump out 155,000 luxury EVs every year.

Specifically targeting local EV buyers at first, the new Lucid facility will be up and running by the middle of the decade — much sooner than the company’s previous estimate of 2030.

This technology is ideal for this part of the world. Because remember, when the oil runs out, the sun will keep shining.

According to Saudi Arabia’s investment minister, the country is ripe for EV production, with other manufacturers and battery makers “in advanced discussions” to move operations to the … ummm … once-oil fields. Yeah, we’ll go with that.

Ah, a whole day’s EV news, and not an Elon Musk in sight.

Oh indeed. And you know what’s an even sweeter deal? Better. EV. Batteries.

For EVs, the tipping point — affordability — may finally be arriving, thanks to a brand-new battery technology.

As soon as they become affordable, demand increases, and sales soar. Now … this stunning new technology is about to cut the cost of EV batteries IN HALF. Meaning by next year, an EV is expected to cost the same as a gas-powered car. 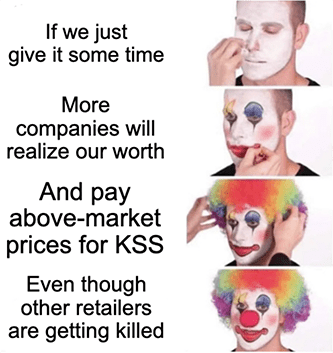 It’s getting hard to keep count of all the different suitors that’ve knocked on Kohl’s’ (NYSE: KSS) door this year. But after months of rejected buyout offers and back-and-forth negotiations, it sounds like Kohl’s may finally be warming up to the idea of a sale.

Why now, you ask? Well, up until this point, Kohl’s has been clinging to the idea that a revival of its retail brand is nearly in sight … if you really squint.

But after looking through its latest earnings report, it’s clear that rumors of Kohl’s’ resurrection have been greatly exaggerated.

For the quarter, the strip-mall “superstore” made a mere $0.11 per share on falling same-store sales — well below Wall Street’s $0.70 per share estimate. Kohl’s also cut its forward-looking guidance, citing tough market conditions.

With the second half of the year looking rockier than the first, the retailer is now apparently talking to all those “interested parties” it previously didn’t give the time of day.

We have formally communicated the specific procedures for the submission of actionable bids due in the coming weeks. We continue with our detailed diligence phase and are pleased with the number of parties who recognize the value of our business and plan. — CEO Michelle Gass

Thing is, the value of Kohl’s’ business is rapidly deteriorating with each new quarter. And if it’s not careful … it could be left holding the bag of a failing business nobody wants to touch, let alone spend billions of dollars on.

In other words, I fully expect to see a sale here soon.

A Goose Of A Different Feather 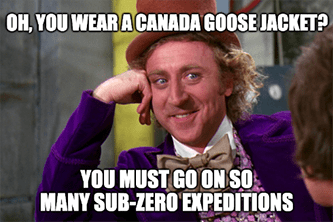 Believe it or not, some luxury brands’ businesses are still booming despite record inflation. Take Canada Goose (NYSE: GOOS), the maker of extreme weather outerwear that’s sold at even more extreme prices.

While I might not be Canada Goose’s target audience, someone out there is clearly willing to spend beaucoup bucks on the company’s tundra-ready tunics.

The retailer reported an unexpected profit of four Canadian cents per share this quarter, giving the company renewed confidence it can deliver better-than-expected full-year earnings. Bit premature if you ask me … but then again, no one asked me.

Either way, investors responded positively to Canada Goose’s positivity and sent GOOS stock rallying 10% today. I guess buyers of a feather flock together … or something like that.

And Now For Something I’d Actually Spend My Money On

Ian King has a surprising answer for all the people who’ve written into him asking if now’s the time to start buying Bitcoin: You’ve already missed out.

That’s right. Bitcoin minted 100,000 millionaires in its heyday … but if you’re not one of them, that ship has already sailed.

But there’s another millionaire-minting crypto at our doorstep: the “Next Gen Coin.”

According to Ian’s research, this coin will be 20X bigger than bitcoin. And it could create as many as 2 million new millionaires.

For Ian’s full breakdown of this Next Gen Coin, click here for his exclusive interview.

Candles In The Wind 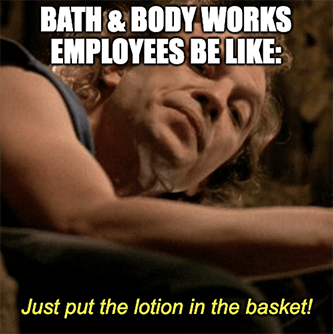 I don’t know about you, but whenever I’m at the mall buying thousand-dollar winter coats instead of paying my monthly bills (ha), I like to stop by Bath & Body Works (NYSE: BBWI) to see what I can spend my remaining life savings on … erm, I mean what new candle scents they’ve come out with for the month.

Winter Wonderland, you say? Smells an awful lot like a rebranding of Paradise Cove … but I’ll bite.

Will you get to the point already? I’ve got a rump roast that’s not gonna cook itself.

That’s oddly specific, but OK. So Bath & Body Works reported quarterly earnings that reiterated all’s not well in the land of retail. First-quarter earnings fell to $155 million from $277 million in the year-ago period — and full-year forecasts dried up quicker than that bargain-bin hand sanitizer they keep at the front of the store.

With the market crashing from its years-long climb, even the faintest whiff of trouble is enough to send investors into a tailspin. Bath & Body Works shareholders were no exception, with lowered guidance resulting in a lowering of BBWI stock by nearly 9%. 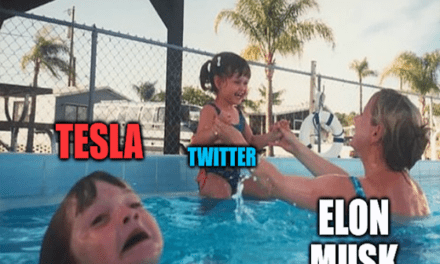 Tesla’s Time Bomb, Get Lowe’s & Tencent None The Richer? 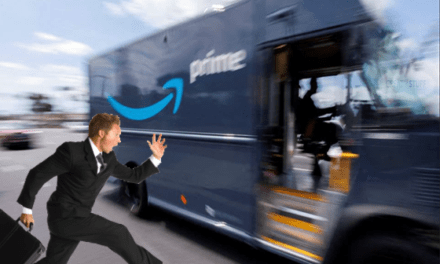