Officially, a bear market is a 20% decline in major stock market averages.

Stocks are selling off. But it’s not officially a bear market yet.

Bear markets are rare. That’s a good thing because they inflict such large losses.

While bear markets hurt, there is some good news. One of the best things to remember about a bear market is that they all eventually end.

Spotting the end of the bear market is rewarding. Stocks often make big moves after it ends. The S&P 500 jumped more than 26% in the month after the last bear market ended.

Fortunately, spotting the turnaround is easy … if you know where to look.

Look Beyond the U.S.

The best way to spot the end of a bear market is to look at global markets.

Expect the same this time. U.S. stocks will reach their bear market lows within hours of each other. But history says emerging markets will bottom much earlier than U.S. stocks. 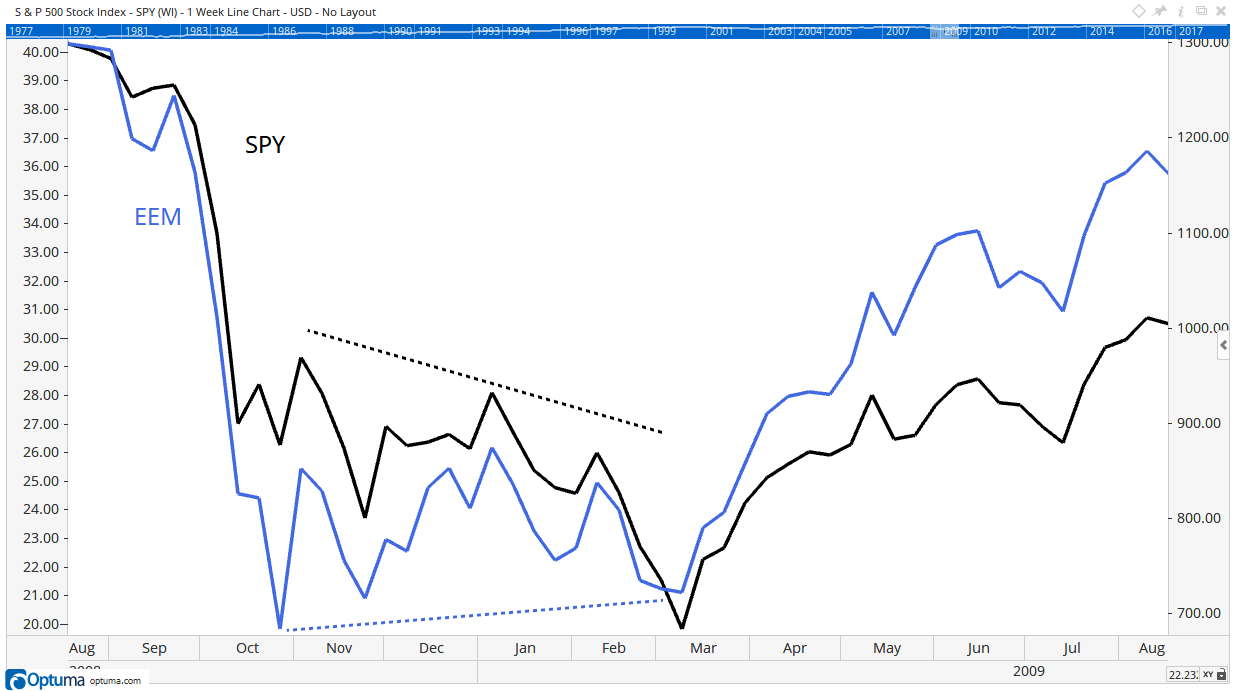 SPY, the black line, kept reaching lower lows into March. EEM, the blue line, never fell back to the low reached in October. The higher low of EEM in March 2009 was the buy signal.

EEM holds stocks trading in China, India, Brazil, Poland and other countries. Risks are higher in these countries compared to risks in developed economies. These are speculative stocks.

These are the countries producing goods for larger economies. Orders for new products drop, and emerging markets slow.

When growth resumes, it starts in emerging markets. Factories in these markets get orders before the recovery is apparent in developed markets.

When they see growth, they buy emerging markets first and then developed markets. Knowing this, we know exactly where to look for the end of the bear market: EEM.

In the meantime, it’s important to invest defensively. Investors could hold more cash during the bear market.

That cash could be useful after EEM bottoms. And there will be a bottom in the market one day.

October Has Been the Worst Month Since 2008

Watch Out for the S&P 500 Death Cross