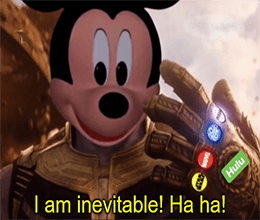 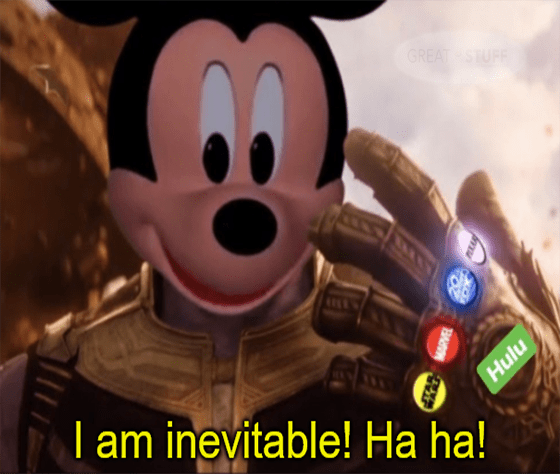 Friday Four Play: The “It’s A Small World After All” Edition

There are so many earnings reports there that it’s time we’re aware … Walt Disney (NYSE: DIS) is in a small world after all.

Shudder… Sorry, that song gives me nightmares. You ever been stuck on the “It’s A Small World” ride in Disney World, Great Ones? I was stuck there for two hours once. Terrifying. All those tiny animatronic faces staring at me with that song on an endless loop. I haven’t been the same since.

Here are the headline numbers:

Typically for a company like Disney, a mere $300 million miss on revenue while theme parks are shuttered isn’t that big of a deal. In fact, Wall Street largely ignored the slight revenue miss. But Disney+ subscriber numbers? Yeah … that miss triggered a lot of investors.

As is the theme with 2021, analysts largely anticipated some weakness in subscriber numbers after Netflix missed big on that front back in April. The OG streamer cited “COVID-19 pull forward,” which basically means that subscriber growth was down because so many people already subscribed during the pandemic lockdowns.

Analysts knew Disney+ would be affected similarly. But, while Disney’s issues weren’t as big as Netflix’s — not even in the same ballpark — Wall Street apparently wasn’t ready for a 5.4 million subscriber miss.

And that, Great Ones, is the sum total of Walt Disney’s bad news. It appears that the Disney+ subscriber miss is all anyone is focusing on … which is sad, considering the rest of Disney’s report was beyond stellar.

For instance, subscriber numbers for both ESPN+ and Hulu topped estimates, coming in at 13.8 million and 41.6 million, respectively. Furthermore, Disney said it still expects to have 260 million subs across all platforms worldwide by the end of 2024.

So, Great Ones … while Wall Street frets over solid growth that wasn’t as growthy as they expected it to grow, DIS remains a solid investment choice right now. That should be music to the ears of Great Stuff Picks readers, who are off about 3.7% right now since I recommended DIS back in December.

Keep holding or adding to your DIS positions, Great Ones. The CDC just lifted its mask mandate for vaccinated citizens, and that’s a huge deal for Disney’s theme parks and stores — and drinking your way around the world … hello Epcot!

I suspect we won’t see DIS trade this low again for quite some time.

He famously moved all his clients to cash two weeks before the Black Monday crash of 1987. He then warned investors about the housing bubble TWO years before it burst into the financial crisis of 2008. Now, he sees a massive uptrend in a hidden industry soaring from the ashes of the pandemic. 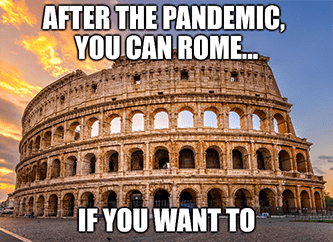 Roam around the world! If this B-52’s classic isn’t Airbnb’s (Nasdaq: ABNB) official song … it should be.

The company posted higher-than-expected revenue and even stronger gross bookings this morning. Earnings? Meh … not so much. But who cares about earnings anymore, right? Not Wall Street…

Anywho, the real driver for ABNB’s roughly 3% gain today was gross bookings, which came in at $10.3 billion.

If you’re not familiar with gross bookings, they represent the amount of money customers have already paid for travel products or services — in Airbnb’s case, gross bookings are roughly synonymous with travel reservations.

Not only did Airbnb’s gross bookings rise 51% from last year, but they also topped Wall Street’s expectations for $7.87 billion. Furthermore, Airbnb CEO Brian Chesky said that the rebound in travel will be “unlike anything we’ve seen before,” especially after the CDC’s mask mandate announcement.

All in all, this was an impressive report for Airbnb. There was an earnings hiccup, but that’s to be expected with costs soaring during the pandemic. If Chesky is right about the massive rebound in travel, ABNB bulls have little to worry about and much to celebrate going forward. 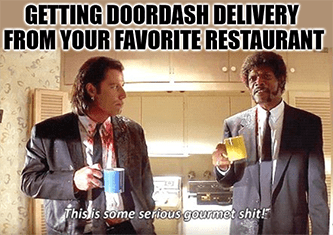 If you needed any more convincing that actual earnings mean Bo Diddly-squat this season … here you go. Despite the haphazard jumbled report that DoorDash (NYSE: DASH) dumped on the Street today, the stock shouldn’t be up 25% today, but it is.

Revenue totaled $1.08 billion and topped expectations for $993.3 million. Though, DoorDash’s earnings were worse than expected, coming in at a $0.34 loss per share and missing estimates for a $0.26 loss per share.

Honestly, I’m not all that surprised the company’s still not turnin’ profits … this is DoorDash, we’re talking about here.

What is surprising to me is that, even after blaming its losses on lack of available drivers, the Street was satisfied with DoorDash’s still-rosy projections for the next quarter.

DoorDash blamed insane customer demand and extreme weather for it being understaffed last quarter. (Can you still say “understaffed” if DoorDash hardly considers its Dashers to be “staff?” Hmm…) But that’s not all: Apparently, the flush rush of stimulus cash “drove a short-term increase in consumer demand and a simultaneous decrease in Dasher hours.”

It’s cold as &$#% outside, the roads are ice, I’m practically getting paid to be at home … yeah, screw driving over to Tijuana Flats to deliver some random stoner’s burrito…

To me, it isn’t a surprise that much of DoorDash’s worker base is folks looking for odd jobs and side hustles. But now we see how much of an impact driver availability can have on DoorDash’s profitability.

The company says the issue is fixed, but should driver availability wane again as the Great Reopening carries onward … DoorDash’s optimism might be a bit premature. I mean, if the company’s still not in the green with sales shooting up 198% on the quarter, when will it be? 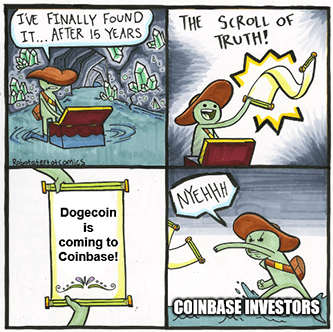 Corporate earnings can be a funny thing sometimes. Literally everyone on Wall Street has expectations and forecasts, and whether a company beats those expectations sometimes depends on who you ask.

Coinbase (Nasdaq: COIN), for instance, reported first-quarter earnings of $3.05 per share on revenue of $1.8 billion.

Both figures were up massively from year-ago levels. For instance, first-quarter 2020 revenue was just $191 million … that’s stupidly impressive.

However, Coinbase either just squeaked past expectations or just missed them … depending on what article you read.

It’s no wonder that COIN has bounced all over the place this morning. Even news that Dogecoin is joining the Coinbase stable wasn’t enough to shake off the earnings confusion.

Dogecoin (DOGE), meanwhile, surged 31% on the news. Congratulations Doge hodlers … I’m looking at you, Great One Jeff B.

Back to Coinbase … it seems like Wall Street just can’t quite get a grip on the company. Investors are going gaga for cryptocurrencies, but when it comes to crypto exchanges … the enthusiasm quickly evaporates.

Personally, I see COIN as a safer way to profit from the insane ups and downs of cryptos like Bitcoin (BTC) and Dogecoin. But, that’s just like, my opinion, man. You have other ways to get into the crypto craze without buying any ephemeral virtual coins themselves. 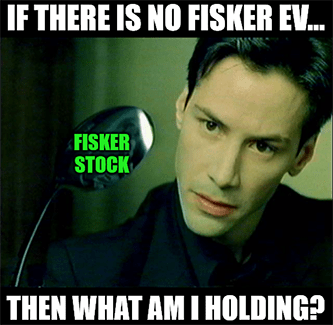 Stop me if you’ve heard this one before: Fisker (NYSE: FSR) jumped more than 4% today following news that it has partnered with Foxconn to build electric vehicles (EVs) in the U.S.

Now, if that sounds familiar … it should. Fisker made the same announcement back in February, right down to the production year and number of EVs to be produced.

I guess today’s announcement makes things official? Other than that, there was very little additional detail.

Oh … there was one interesting note from the Foxconn/Fisker joint statement. The duo has agreed to jointly develop “a new breakthrough” EV that would be the most affordable on the market. The duo is shooting for a price point in the $30,000 range.

Now I know we’ve heard that one before.

Remember? Tesla’s Model 3 was supposed to be in the $30,000 … but that was after government tax credits. I wonder if Fisker is going to pull the same stunt with its “breakthrough” EV…

I’m clearly not jazzed by this announcement at all, and you probably shouldn’t be either. I mean, 2023? Everyone and their mother will have an EV on the market by that point — why would Fisker make any difference at that point?

Seriously, if you have a reason why I should pay more attention to Fisker, email me at GreatStuffToday@BanyanHill.com and let me know. Inquiring minds want to know!

Ladies And Gentlemen — The Weekend! 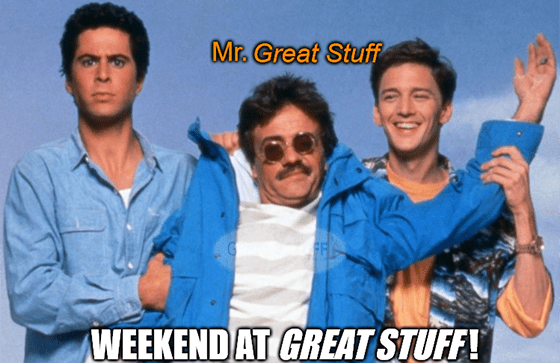 Welcome to the weekend, and boy, do we have a special treat for you!

Ooh, lemme guess! Is it a jackal? I bet it’s a jackal. Please?

Wait … Jackal? Like “I feel the sun shining (down on me!)” kinda Jackyl?

Umm … no. Though, that would be fun. I’ll have to put that on the to-do list.

Nevertheless, I do have a surprise coming for you this weekend. And it should hit your inboxes (Down on me) bright and early Saturday morning … so get ready! 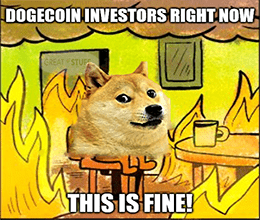 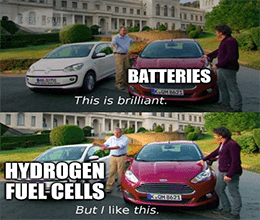