Home » Economy » U.S. Economy » The Death of the Mall Has Been Greatly Exaggerated

The Death of the Mall Has Been Greatly Exaggerated

According to legend, a newspaper once printed Mark Twain’s obituary by mistake. When Twain learned of this, he said: “The reports of my death are greatly exaggerated.”

Well, the same may be true of the retail mall. Reports of its death seem to be exaggerated.

Vacancies are only a major problem for some malls. Other malls are doing fine. Bloomberg recently explained the reality with a simple headline: “Your Local Mall Is Dying. Unless You Are Rich.”

Research from the Wells Fargo Economics Group confirms this. Malls are in different markets. Malls in major markets are doing just fine. Malls in tertiary markets are struggling. 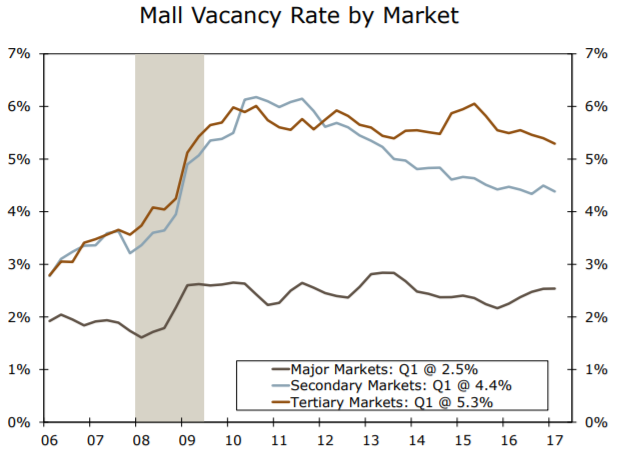 Major markets include large cities such as New York and Los Angeles. Secondary markets are cities with populations of at least 1 million when suburbs are counted, such as Atlanta and Denver. Tertiary markets are the rest of America.

Announcements of store closings confirm we live in a divided country. Macy’s, Kmart, Sears and J.C. Penney have announced they are closing 356 stores, and 95% of those stores are in tertiary markets.  Wells Fargo notes: “These four brands cater to middle-income households, which increased expenditures in the precrisis period largely due to the housing wealth effect. Many of these households were hit hard in the downturn, as much of their wealth was concentrated in housing.”

Mall vacancies reflect the problems found in tertiary markets. These are cities where factories are closing and families are struggling. It might not be long before residents of these communities are forced to travel to a big city for shopping trips, just as their great-grandparents did.

Friday’s Unemployment Report Is Likely to Be Trouble for Stocks