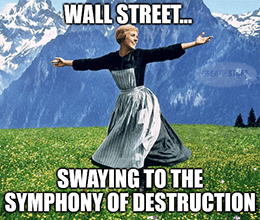 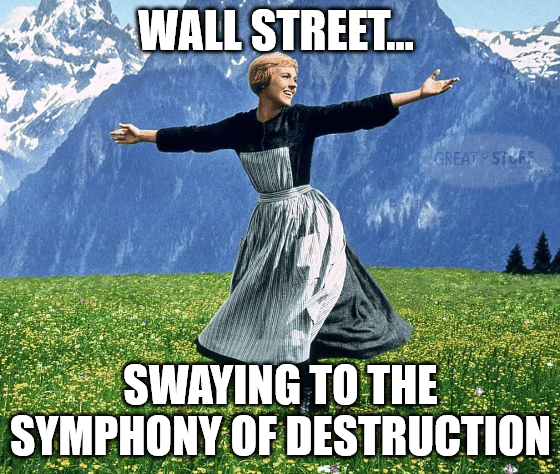 An Economic Symphony Of Destruction

You take a pandemic and put it in control. Watch it become a god. Watch peoples’ portfolios roll. And roll. And roooooll!

Yeah, I might be rollin’ a bit heavy today on the sensationalism … or am I? Personally, I find the “or am I” more disturbing than being dead on the money. It’s that uncertainty that really makes my head explode, you know? (Explooooode!)

Before we get too deep in the weeds … here’s the situation, Great Ones.

The U.S. Labor Department just reported that the August Consumer Price Index (CPI) rose just 5.3% year over year and gained a measly 0.3% from July. Both readings were below expectations.

Initially, Wall Street rallied on the news. After all, a slowdown in rising consumer prices means a slowdown in inflation — something I’ve predicted for quite some time.

In fact, I warned that we’d see just how strong the U.S. economic recovery was in the second half of this year. And what we’re seeing ain’t pretty.

For instance, U.S. July retail sales fell a larger-than-expected 1.1%. Furthermore, August retail sales — due out later this week — are estimated to fall another 1%.

And we didn’t even get to the best part yet!

Why yes, there’s more. You see, Federal stimulus is about to run out for everyone. Extended unemployment benefits are gone or nearly gone. The Fed is preparing to ease up on its free-money policies … and the pandemic isn’t even over yet. Far from it.

Throw in a sea change in the U.S. labor force with employees demanding more pay, better benefits and a more agreeable working environment (i.e., working from home) … and we’re looking at a major upheaval in the U.S. economy.

It’s not quite a “Symphony of Destruction” … but you can see it from here. 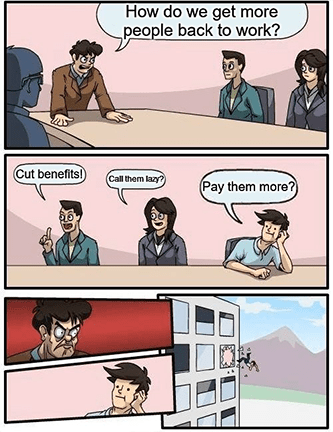 I’ve often said that COVID-19 is the main driver behind all this madness and that if the virus went away, we’d all be okay. While I still believe that the best thing you can do for your portfolio right now is wear a mask and get vaccinated … I’m starting to believe that, while beneficial, that might not change the inevitable.

What if COVID-19 was just the catalyst for this massive shift in the U.S. economy? A catalyst that allowed workers to reevaluate their current jobs? A catalyst that greatly hastened the rise of the services industry — and the demise of what little manufacturing remained in the U.S.?

Don’t get me wrong: I don’t believe that American workers are lazy. I just believe they’re opportunists. And if they can use the Fed’s stimulus money to better their situation, they will. That’s exactly what’s going on here … and it’s changing the economic landscape.

What’s more, COVID-19 is obfuscating this shift … all but blinding Wall Street with uncertainty.

Back to the CPI data … I said that Wall Street initially rallied on the report due to the lowered threat of inflation. But stocks quickly reversed course as investors realized what a slowdown in consumer spending actually means: lower corporate revenue.

I stand by my words that the second half of 2021 will tell us all how the U.S. recovery is going. But I think we can all already see where this ship is sailing. Old-school Great Ones know the lifeboat drill by now, repeat after me!

Oh, and keep reading Great Stuff … if that part wasn’t clear. And you won’t be dancing like a marionette, swaying to the economic symphony of destruction.

Editor’s Note: Some Positive News Before You Go!

Since Flashpoint Fortunes launched late last year, Clint Lee has closed out a staggering 24 wins out of 27 plays. His closed plays are averaging a 47% profit, with a hold time of 49 days.

Clint has agreed to open Flashpoint Fortunes up to new members — but only if you respond soon.

So if you want to get in on Clint’s next trade … go here now. 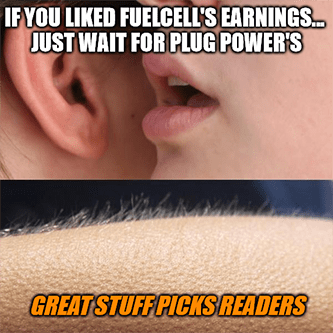 You’ll be surprised to know, Great Ones, that I don’t like everything hydrogen. Case in point: FuelCell Energy (Nasdaq: FCEL) quickly surged more than 24% this morning on better-than-expected earnings … but I still don’t like it.

FuelCell is a hydrogen fuel-cell company. It basically does everything Plug Power (Nasdaq: PLUG) does … but worse. But FCEL stock surged today, as FuelCell proved it’s not quite out of the game just yet.

Not too shabby, I’d say. Especially since this is the first time in seven quarters that FuelCell didn’t report a wider-than-expected loss. What’s more, gross margins swung from negative 16.7% to positive 4.1%. In other words, FuelCell is finally moving in the right direction and could be on the verge of a turnaround.

Part of this turnaround is due to better management tactics at FuelCell … but most of the turnaround is likely due to expanding hydrogen fuel-cell usage in Europe and abroad. The U.S. is still sleeping on this energy revolution, sadly.

So, while today’s report makes FCEL a bit more attractive to hydrogen energy bulls, it makes Plug Power that much better of an investment — especially after Plug announced even further expansion into Europe with a new German headquarters.

Yeah, that’s right: A positive FuelCell report might be good for FuelCell … but it’s even more bullish for Plug Power, which just so happens to be up 66% in the Great Stuff Picks portfolio right now.

The Bad: Railroad Ties That Bind 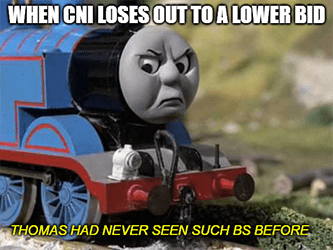 Well, I’m running down the road, tryin’ to loosen my load … I’ve got seven buyout bids on my mind. Four that wanna own me, two that wanna stone me, and the other is, well, Canadian Pacific Railway (NYSE: CP).

Sorry to break the lyrical façade … but it’s been a rough Tuesday, and I hate the Eagles, Great Ones. (No offense, Glenn Frey, I just do as the movie quotes command.)

Anyway, railroad runner Kansas City Southern (NYSE: KSU) is taking it easy … and taking the easy way out of its love triangle between Canadian Pacific and Canadian National (NYSE: CNI). Up ‘til a fortnight ago, it looked all but certain that Canadian National and its ever-higher bids would buy out KSU.

At least, until the regulatory Fire Nation attacked. The Surface Transportation Board (STB) laid waste to CNI’s plans to form a voting trust, signaling that there would be more regulatory hurdles ahead on the tracks should KSU choose CNI as a suitor.

And it looks like Canadian Pacific’s game to wait out CNI’s short-lived tryst paid off.

With CNI’s deal now shrouded in anticompetitive doubt, KSU would rather tie-up with Canadian Pacific. Even with its cheaper takeover bid, Canadian Pacific has one thing that CNI can’t match: regulators’ favor and a better chance of getting the deal approved.

KSU knows it will gain more by landing a buyout deal now instead of prolonging investors’ uncertainty with a lengthy wait for antitrust approval. (See also: Nvidia’s ARM buyout.) CNI has until Friday to present another bid — but must prove it can pass the STB’s watchful gaze.

KSU investors are closer than ever to their payout. CNI investors? Not so much. (By the by, do any of you own these railway stocks? Or any railroad stocks? No? Fine then, back to playing Train Simulator I go…) 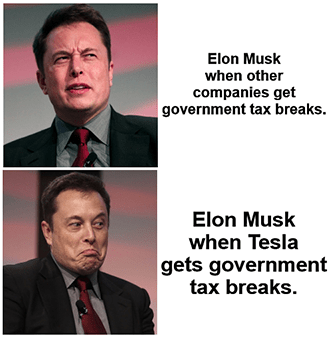 What’s a Tuesday without the Tesla (Nasdaq: TSLA) CEO tangling himself up in more Twitter drama?

Today, Elon Musk has a new stick in his craw (and who knows where else). That stick? A proposed electric vehicles (EV) bill that offers tax credits up to $7,500 for first-time EV buyers on vehicles under $55,000. Breaking this down, you’d get:

Uh-oh, there it is! They said the “U” word that Elon doesn’t like!

No … Elon’s famously against unions, saying the bill was written by lobbyists from Ford (NYSE: F) and the United Autoworkers Federation, and it doesn’t benefit American taxpayers. Now, how you personally feel about unions is how ugly today’s news really is. Unless…

Unless the real ugliness here is Elon’s hypocrisy. I mean, Musk is the last person on Earth who should be complaining about government favoritism — name a world leader he hasn’t schmoozed with for favors and tax breaks. Dude even got China’s Chairman Xi Jinping on his side!

What’s even more hypocritical is that this bill actually helps Musk & Co. These credits make Teslas cheaper. More people will buy Teslas … Elon’s gripes notwithstanding. The energy bill could actually be a boon for Tesla, so why must Musk bite the incentive that feeds him? Is it the attention? The memes? The Twitter retweets?

TSLA shares dropped on the news but rallied back when investors realized the whole hoopla was just finicky Elon being Elon like usual.

“Why My EV Is About to Be Obsolete”

A former Tesla employee just released a brand-new innovation promising to make every EV out there instantly obsolete.

Some call this man “Employee No. 7.” Even the “Godfather of the EV Revolution.” He created the first working Tesla battery. Now he’s about to change everything again. Click here for the full scoop!

All right, you Great Stuff rabble-rousers get a freebie rant this week …

Today’s Quote of the Week comes from none other than Senator Elizabeth Warren. If you had bets that Warren was ready to tear down the big banks (again), then you are 100% correct (again).

Continuing to allow this giant bank with a broken culture to conduct business in its current form poses substantial risks to consumers and the financial system.

Sounds like there was a long line at the pull-up ATM?

I mean … I don’t disagree upfront. This is Wells Fargo we’re talking about here. You know, the bank that opens up credit accounts under customers’ names without telling them? The bank that kept charging homeowners unwarranted mortgage fees? The bank that might have potentially “accidentally” illegally foreclosed on hundreds of homeowners?

Yeah … that one. There’s a lot that we could grill Wells Fargo on when it comes to misconduct. But then, I dare you to name one squeaky clean “big bank” … I bet you can’t.

The question is: Why is Elizabeth Warren singling out Wells Fargo?

After all, Wells Fargo has already been “punished,” if you can call it that. And Senator Warren certainly doesn’t call it that:

Divorcing Wall Street-centric work — which can include managing investment funds and providing financial market sales and trading services — from the bank would ensure that Wells Fargo’s everyday customers did not continue to suffer. 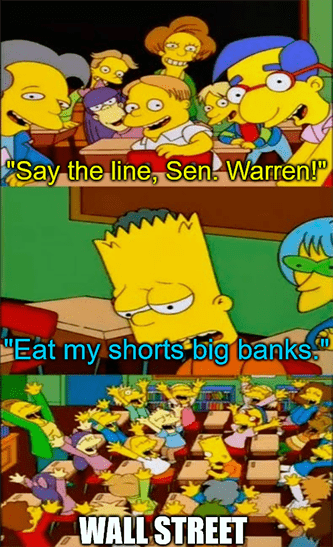 Now Warren’s point is clearer. To her, Wells Fargo’s investment banking greed overpowers any supposed benevolence toward retaining banking customers. Are any of you surprised? I’m not. I mean, it’s Senator Warren, after all.

Furthermore, some part of me stuck in ‘08 is sore that I didn’t get a bailout … but I can see where she’s coming from here, bitterness aside.

Should Warren’s suggestions have been incorporated into Wells Fargo’s punishment? Probably … if anything was going to happen, it’d be then. Complaining about Wells Fargo now doesn’t do any good. That’s issue one.

The second problem is that Elizabeth Warren singled out Wells Fargo as a target when, by her reasoning, every Wall Street-facing bank should probably face the same “divorcing.”

So why even bring this up?

The same reason why any talking head shares their hot takes: Because it’s provocative … gets the people going. It gets Wall Street talking about breaking up banks again, even if nothing comes of it. And it gets Great Ones going to the inbox to rant in return.

GreatStuffToday@BanyanHill.com is where you can put on your best Mr. Great Stuff impression and rant until you’re blue in the face. In the meantime, here’s where you can find our other junk — erm, I mean where you can check out some more Greatness: 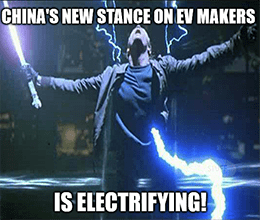 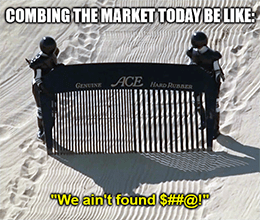