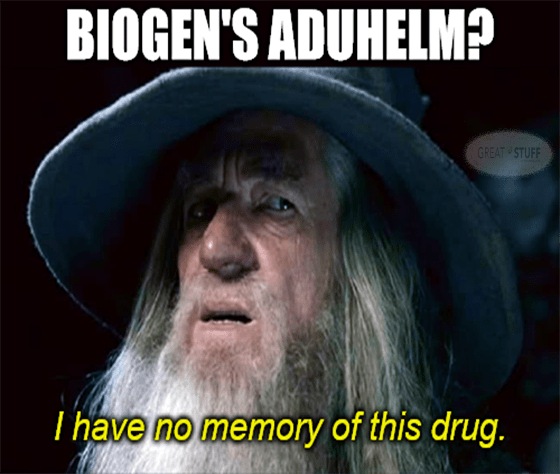 Aduhelm? I Remember You…

Woke up to the sound of investors’ pain. Wall Street whispers, and I think of you. All the tears you cried, they called my name.

“When you needed me, I came through!” — Biogen (Nasdaq: BIIB), probably…

Why were analysts shocked? Because Aduhelm doesn’t really fight Alzheimer’s or the dementia that accompanies it. Aduhelm actually reduces amyloid beta plaques that have been linked to causing Alzheimer’s disease.

In fact, the FDA’s own head of Drug Evaluation and Research, Dr. Patrizia Cavazzoni, said these very ominous words:

Back in June, I blasted Biogen and the FDA for this “reasonably likely” approval language … and the $56,000-per-year cost.

$56,000 for a drug that is “reasonably likely to result in a clinical benefit?”

Well, in its infinite wisdom, Biogen has realized the error of its ways … or something like that. This morning, Biogen announced it’s slashing Aduhelm’s price nearly in half. But Biogen isn’t cutting the price out of the goodness of its heart.

The company didn’t suddenly have a Grinch moment where its “heart grew three sizes that day!” It wasn’t visited by the ghosts of Christmas past, present and future.

No, in true Scrooge fashion, Biogen was motivated by money … and the fact that it seems very few people are interested in dropping $56,000 a year on a treatment that may or may not treat Alzheimer’s.

So, now for the low, low price of just $28,200 per year, you too can be uncertain if Aduhelm will help treat Alzheimer’s in someone you love. Assuming they can afford it, that is.

And if you think I’m being unfair to Biogen … that it really does care about Alzheimer’s patients and their well-being, here’s Biogen CEO Michel Vounatsos waxing “altruistic” over the Aduhelm price cut:

Over the past several months, we have listened to the feedback of our stakeholders, and we are now taking important actions to improve patient access to Aduhelm.

These are difficult decisions necessary to sustain our mission to develop medicines for the most devastating neurological diseases. We must bring our cost base in-line so we can continue to invest in future innovation and growth, retain and compete for outstanding talent, and provide acceptable returns to our shareholders.

Vounatsos is listening to shareholders and striving to provide acceptable returns. That’s why Biogen’s slashing the price — not out of some overflowing Christmas spirit toward Alzheimer’s sufferers.

Now, I can already hear some of you:

Biogen has to make money!

It has to take care of investors!

Sparta? THIS. IS. CAPITALISM! 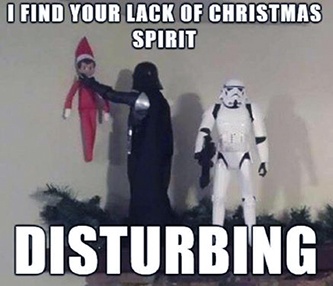 But I’ve also had my grandfather taken from me by Alzheimer’s. So, you’re just gonna have to forgive me this vice of bashing on Biogen for charging an arm and a leg for an Alzheimer’s treatment that’s only “reasonably likely” to provide a clinical benefit.

Sorry, scratch that. After today, it’s just an arm or a leg for Aduhelm. Silly me.

So, how’s Wall Street reacting to the news?

Well, judging by BIIB’s price action since June … not all that well. BIIB stock is down 40% since Aduhelm was approved by the FDA, and today’s price cut news isn’t helping at all.

And if you happen to be a BIIB bull, you’re gonna want to keep a close eye on the $250 area. The stock has the potential to bounce back — broader market willing — but there’s stiff price resistance at $250. Not only is it a round-number level with potential psychological importance, but BIIB’s 50-day moving average is also sliding into the $250 region.

In short, BIIB isn’t a “buy the dip” candidate, in my opinion. In fact, if I owned BIIB stock, I’d sell any rally at this point.

What do you think, Great Ones? Will Biogen’s price cut on Aduhelm save BIIB stock? Or will Wall Street finally forget Aduhelm altogether?

Check This Out: 124X Better Than The Market?!

Chad’s ready to reveal this new strategy to the public — click here now to check it out while you still can.

Good: And They Lived Happily Ever After 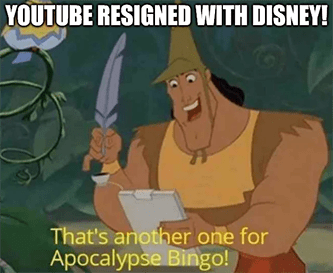 Great googly moogly, Great Ones! The manic mouse hunt between Alphabet (Nasdaq: GOOGL) and The Walt Disney Company (NYSE: DIS) is finally over … at least until the next time YouTube has to negotiate a Disney carrier agreement.

It’s not that I expected this lover’s quarrel to end any differently. In fact, I told you last week that I expected a deal to materialize between the two streamers before their current contract expired … even if it came down to the wire.

What I didn’t expect was for Alphabet to wait just long enough for all of Disney’s channels — including popular networks like ESPN and FX — to go dark on YouTube TV before it inked the deal with Disney.

The “blackout” lasted for two days before the two streaming services made peace, during which time YouTube TV subscribers were given a $15 discount on their monthly payment plan to account for Disney’s missing channels.

YouTube has even promised to honor the $15 credit for people who canceled their memberships but want to renew their subscription … which makes me think that enough people jumped ship over the weekend to hurt YouTube’s bottom line.

Leave it to Alphabet to let one of its services stagnate just long enough that it becomes a problem, only to fix said problem after enough people complain. It’s stuff like this that really makes me miss Google’s “Don’t be evil” days… 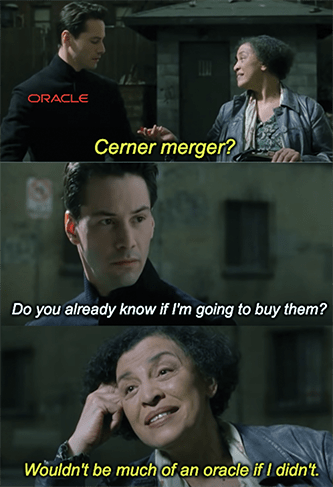 With The Matrix Resurrections hitting movie theaters this week — and more Matrix memes undoubtedly coming your way — it’s only fitting that we should hear from the Oracle this sleepy Monday morn’.

No, not that Oracle and her mind-bending cookie batter … but rather Silicon Valley software giant Oracle (NYSE: ORCL), which just announced a $28.3 billion all-cash acquisition of medical tech provider Cerner (Nasdaq: CERN).

The acquisition should be finalized sometime in 2022 — such an accurate approximation, I know — and will help Oracle gain a firmer footing in the health care market, bringing a treasure trove of data into Oracle’s cloud network.

Together, the two companies will “have the capacity to transform health care delivery by providing medical professionals with better information — enabling them to make better treatment decisions resulting in better patient outcomes.”

In other words, the more data that doctors have at their disposal, the more accurately they can diagnose and treat patients. Swell! The deal also bodes well for ORCL investors, as the merger should eventually contribute billions of dollars in revenue to Oracle’s outsized earnings.

Of course, the company still has to cough up $28.3 billion before the deal becomes final … which could explain why Oracle stock is down nearly 4% today. That’s a lot of moolah — even for this titan of a tech company. 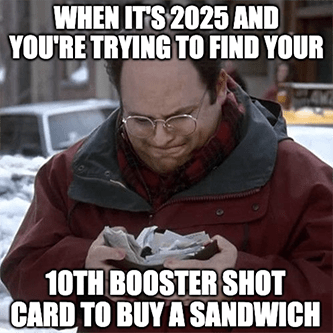 Moderna (Nasdaq: MRNA) reminded investors that it still matters today after releasing preliminary results that show its booster shot is effective against Omicron despite the virus’ various mutations.

In fact, according to Moderna, people who get its booster shot build about 37 times more antibodies against Omicron than people who don’t get the shot. This means it’s full steam ahead for Moderna’s booster bonanza:

To respond to this highly transmissible variant, Moderna will continue to rapidly advance an Omicron-specific booster candidate into clinical testing in case it becomes necessary in the future. — Moderna Chief Executive Officer Stéphane Bancel

This news couldn’t come at a better time, as countries around the world have already started flirting with tighter lockdown restrictions as Omicron infections surge. The Netherlands already went into full lockdown mode on Sunday … and more European countries threaten to follow suit if transmission rates don’t get under control.

I’ve made my vaccination views pretty plain here in Great Stuff … so I won’t go into the song and dance today. What I will say is that booster revenue should act like an adrenaline shot in the arm for MRNA investors … especially if variants keep cropping up that lower the initial shots’ efficacy.

If vaccine stocks are still on your radar, Moderna’s 5% dip today could be considered a potential buying opportunity … assuming Omicron continues to overshadow all the post-COVID progress we made in 2021.

Well … about that. The earnings “feast” is looking a little light this go around, but nonetheless, this week still packs a few heavy hitters ready to report.

Check out the week in earnings from EarningsWhispers on Twitter: 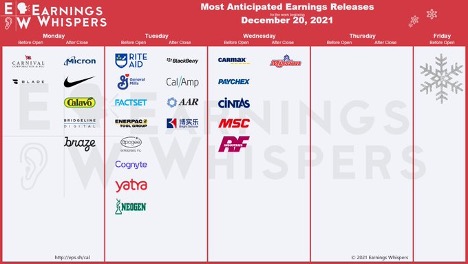 Carnival (NYSE: CCL) kicked us off this morning, albeit on the wrong foot with a dismal double-miss report that somehow still sent CCL rallying 4%. Hey, cruises are at 61% capacity and rising … so Carnival has that going for it, which is nice.

By the time you read this, Micron Technology’s (Nasdaq: MU) insights into the semiconductor slowdown will have chip investors heaving a sigh of relief (yeah, as if) or ready for Monday to be over already…

NFT newbie Nike (NYSE: NKE) is right behind Micron today, reporting after the bell. I still can’t get over the fact that the sneakerhead-collecting addiction turned virtual, but then again, why wouldn’t it?

The company’s comfy-casual clothing has been selling like, well, sneaker NFTs amid the pandemic. Digital sales surged as much as 147% last summer, but the jury’s still out if Nike has been able to sustain that growth recently.

It’s no CrowdStrike (Nasdaq: CRWD), which Great Ones grabbed a 314% gain on earlier this year, but BlackBerry’s recent reports are at least more entertaining than failing cell phone sales… Plus, if you don’t think cybersecurity is a big enough trend for BlackBerry to jump on … have you tried looking for cream cheese lately?

One more oddball to watch this week is Cintas (Nasdaq: CTAS) — an under-mentioned role in the current labor market kerfuffle. It’s the who’s who of business suppliers — everything from uniforms and cleaning products to fire extinguishers and first aid supplies.

How much the whole rehiring, resigning and resupplying shebang impacted Cintas’s bottom line, however, remains to be seen.

And finally, saving the best for last, leave it to longtime Great Stuff Pick CarMax (NYSE: KMX) to round out the week’s earnings. Online car buying? So hot right now. And I don’t see it dying down anytime soon.

KMX stock has promptly fallen off a cliff in the recent volatility — apparently, no one needs cars anymore, didn’t you hear? — and Great Stuff is watching for any positive updates to help buoy the stock.

Are you a Great Stuff Pick investor chomping at the bit for CarMax’s report? Any options traders out there playing Micron’s earnings? Barring all that, what stocks are you watching this week?

Let me know at GreatStuffToday@BanyanHill.com. In the meantime, here’s where you can find our other junk — erm, I mean where you can check out some more Greatness: 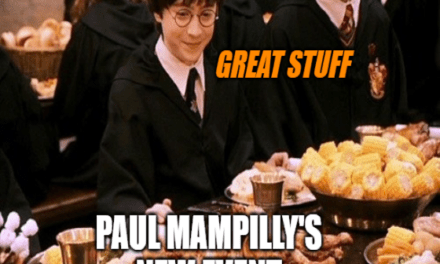 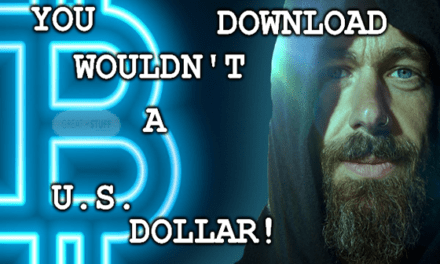