Big Money Moves Looking Out to 2023 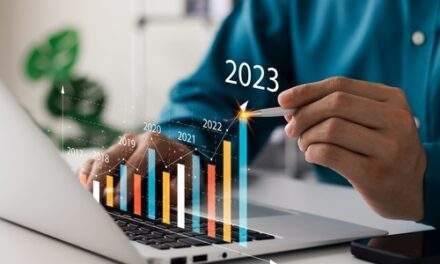 Welcome back to Big Money Monday.Stock futures are up, oil is falling through the floor, and the market is kicking off the new week with gobs of cash flying in all directions.If this is your first Big Money Monday in True Options Masters, welcome.Here I use my unusual options activity scanner to set my sights on the biggest players in the stock market… and see where they’re placing their bets.(Last week, for example, we spotted multimillion-dollar positions on AMD and FSLR to the upside… and on BABA and ARCH to the downside.)Some of these bigshot traders will score massive windfalls, and others will have to cut and run…But often, following these trades has led to major payouts. I’m talking multiples on your money in short order.All from watching the Big Money.And this week, the theme is “time”…

For unusual options activity, most of the trades I spot have two qualities:Short-term timeframes… and large chunks of cash.These get flagged because stocks don’t usually move a whole heck of a lot in a short period of time, leading us to believe the traders may know something we don’t.That’s why they would make a large bet like that and risk it all.Lately, though, we’ve been seeing something different. We’re seeing trades get flagged as unusual options activity with more and more time before they expire.Take just last Friday. There were over a half-dozen unusual trades that don’t expire until January 20, 2023 — about 10 months away.These aren’t looking for short-term pops and drops, which is a little less relevant due to the volatility we’re seeing day-to-day.  Instead, they show where investors are willing to tie up capital. To me, that likely means a higher-conviction bet.Only time will tell… but we have seven trades to keep an eye on in the months ahead.Here’s what traders were jumping into on Friday, with the January 20, 2023 expiration…

The big thing that stands out this week is there’s no direct connection between these trades.They’re in all sorts of sectors — financials, oil, gas, consumer discretionary.It’s all over the board, and all of these positions expire on January 20, 2023.So we have a lot of long-term bets being thrown around, all for at least over a quarter-million bucks.Let’s dive right into it…Bed Bath & Beyond (BBBY) $30 calls for almost $1 million.The BBBY calls came in three separate lots, all done with sweeps. This means they wanted to make sure the positions were filled, instead of fighting for a price and missing out at the end of the day.Orders came within just 30 minutes of the close. It’s a volatile stock that can see wild swings any given week. That likely explains their sense of urgency.Occidental Petroleum Corp. (OXY) $60 calls for $907k.OXY builds off that million-dollar BP (BP) trade we talked about in Quick Takes LIVE. Traders are making some smart, long-term moves around the oil and gas stocks, betting on the recent trend to continue.Netflix (NFLX) deep out-of-the-money $250 puts for $808k.Shares of Netflix have dropped 50% since November. This trader is expecting another 30% drop before the end of the year and wagered over $800k to back it up.I know the streaming wars are still a thing and Netflix is potentially losing customers to Disney+, but I’d expect the stock to stabilize over the next few months rather than fall another 30%. I doubt this plays out as the trader hopes by January, but time will tell.  Ally Financial (ALLY) $35 puts for $525k. The Carlyle Group (CG) $35 puts for $405k. KKR & Co. (KKR) $42 puts for $332k.ALLY, CG, and KKR are financial-related stocks. And those are the exact stocks that will get hit hard fast, so think of these trades as a hedge to any more weakness in the economy.Who knows how much economic weakness is ahead of us with all the global turmoil, but if the U.S. does have an economic slowdown, these are the trades to make.American Airlines Group (AAL) $20 calls for $290k.Airlines remain beaten-down, even with the market correction.AAL never even got back to its pre-pandemic levels. And it’s still trading about 50% below where it was before March 2020.That’s significantly lower than where the bulk of the stock market is trading, relatively speaking. Shares would have to rally over 40% for this trade to make a profit, but with 10 months remaining, anything can happen. You just need airline stocks to bottom this month and begin moving higher.

That’s it for Big Money Monday.Do you plan on following any of these trades? Have you scored a win following this unusual activity in the past?If so, my team and I wanna know! Write us at TrueOptions@BanyanHill.com.

I’ll be back to you this Thursday in Bank It or Tank It, with my fresh thoughts on whether you should bank on a stock moving higher, or tanking down to new local lows.Regards,

P.S. As much as I love following big money trades, I can’t call it my #1 trading strategy…See, I spent the last couple years working on a special trading algorithm.This algo shows me which parts of the market are set to speed up… and which are slowing down.In other words, with these few tiny lines of code, I’m able to stay in the stock market’s Fast Lane.This means we’re always in the fastest, and potentially most profitable trades the market can offer up.I’m talking 109% in one day, 148% in three… and even 269% in just five.If you’ve never seen this thing before, you should click here now and check it out. I guarantee you’ve never seen anything quite like it. 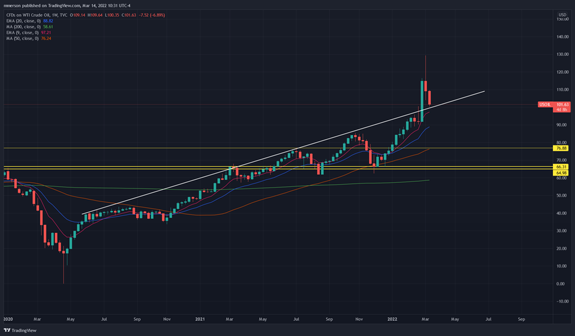 Oil probably has a little more work to do on the downside here…I was just looking at a weekly chart of WTI crude this morning, and spotted this long-term rising resistance line. That line goes all the way back to the immediate post-pandemic-panic recovery, when oil traded for about $40 a barrel. (Remember those days? $2 gas? Precious memories…)As you can see, oil went vertical after Russia invaded Ukraine (as our senior analyst Amber Hestla predicted here and here). It broke far above that rising resistance, and extremely far away from its various weekly moving averages.And… that’s just the thing. Oil got overextended to the upside. What goes up, must come down. Simple as that.Now before you get excited about $2 gas again, I have to say that I expect oil’s longer-term trend to stay bullish. But I also expect it to touch $100 a barrel sometime in the next couple weeks, so we retest that former resistance line as support. [UPDATE: I wrote this at 8 a.m. when oil was around $105. Clearly I was conservative about my bearishness in oil. It’s at $100.64 as I write this at 10:45.]My initial idea was to play oil with puts this week, but now that we’re already at this support, I think you want to look for a bounce here. Play calls on the United States Oil ETF (USO).Regards, 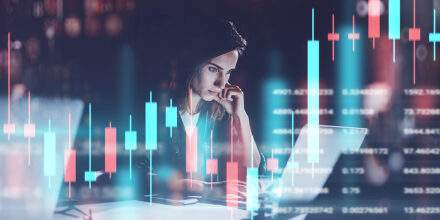