Be a Smart Investor in a Gambler’s Stock Market 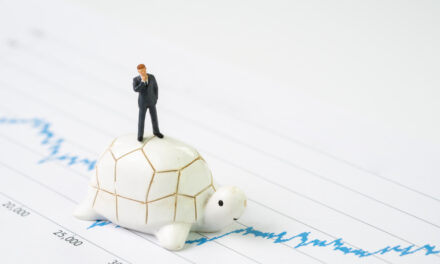 Dave Portnoy has a high opinion of himself.

Portnoy founded the controversial sports and pop culture blog Barstool Sports, where he calls himself “El Presidente.” He made millions selling a stake in the site to gambling company Penn National Gaming Inc. in January of this year.

Since the COVID-19 crisis started, Portnoy has refashioned himself as an expert on the stock market. His Davey Day Trader videos are a big hit. Millions of novice investors — who tend to be drawn from the same demographic as Portnoy himself — have flooded into the stock market this year.

Last week he declared that when it comes to investing, the Oracle of Omaha is “washed up. I’m the captain now.”

His investing thesis is simple: “Stocks only go up.”

The fact is Portnoy and his followers aren’t investors, they’re are gamblers.

Portnoy didn’t invent “trader bros,” as they are sometimes called.

Anybody with a little money and a smartphone could trade stocks as often as they like.

But once the coronavirus crisis hit, a combination of beaten-down stocks, government relief checks and trillions of dollars of Federal Reserve liquidity turned these traders into what’s now known as “Portnoy’s Army.”

Portnoy’s followers have piles into a strange combination of the companies most severely affected by the current crisis, such as airlines, cruise lines, hotels and bankrupt companies like Hertz.

They’ve also targeted (By coincidence, I’m sure!) Penn National itself, where Portnoy is now a significant shareholder.

Portnoy’s Army has done reasonably well for itself until recently. An index of their favorite stocks compiled by Goldman Sachs Global Investment Research shows that their relative return was far higher than that of institutional traders like hedge funds: 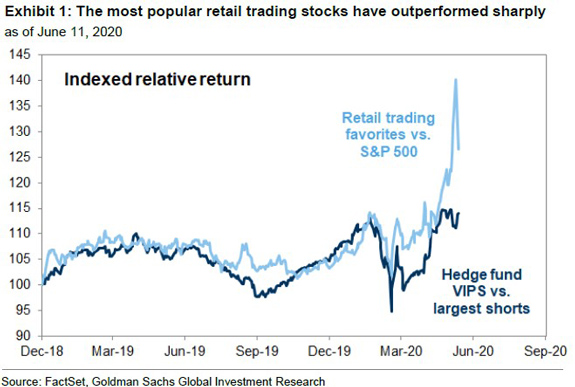 “100% percent wrong,” they said of me. “Never made a correct prediction in his life.”

Thursday and Friday, you see, are responsible for the steep drop in the blue line in the chart above, which wiped out about a third of the trader bros’ coronavirus crisis gains.

While Portnoy’s Army was getting its clock cleaned, has-beens like Warren Buffett and I managed to create gains.

In a recent interview with MSN.com, 20-year-old Purdue University student Cameron Coleman explained that he started investing about a month ago.

Coleman had been an avid sports better. He said with no sports to bet on, he turned to day trading.

Recently, however, Coleman had a change of heart about his investing approach. “I’ll switch to a more buy-and-hold strategy.”

Cameron, if I may, allow this washed up boomer to give you some advice about that.

Over the long term, stock prices are determined by the discounted future value of corporate earnings.

Corporate earnings are determined by the performance of the economy. If the economy underperforms relative to its long-term trendline, earnings will fall and so will stock prices.

Nevertheless, the stock market can be propped up artificially for a long time. From 2008 to late 2017, U.S. gross domestic product (GDP) remained significantly below its previous trendline every quarter. But thanks to the Federal Reserve’s injections of liquidity, massive corporate stock buybacks and huge tax cuts, stock prices rose.

Eventually, however, a funny thing happened.

Stocks became volatile. We saw big collapses in early 2018, the fourth quarter of that year and the second quarter of 2019. Stock prices began to oscillate wildly above and below a new trendline (in green): 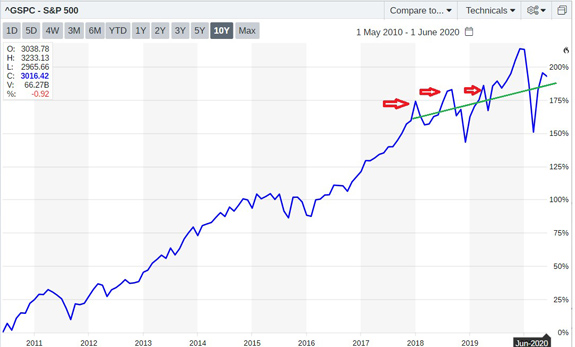 Now we have another GDP shock. U.S. economic output is forecast to drop by 50% more than it did in the aftermath of the GFC. It’s expected to remain significantly below trendline for the next decade: 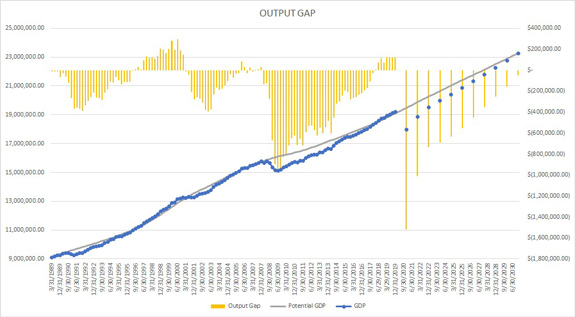 Portnoy’s Army believes the Fed will simply do what it did before. It will inject massive amounts of liquidity to prevent stock prices from reflecting the new GDP trendline.

The White House and Congress will flood the economy with more stimulus to make up for the decline in private sector output.

There are two problems with that, Cameron.

Problem No. 1: The Fed is already massively overextended. For all intents and purposes, the stock market and U.S. corporate credit markets are on permanent Fed life-support. Interest rates will surely stay near zero. But if the Fed continues to inject new liquidity just to support U.S. capital markets, we risk a collapse in the value of the dollar, imported inflation and recession. So eventually, the Fed is going to stop:

Problem No. 2: We’re in an election cycle. Like it or not, the current odds are that that there will be a change in the White House this year. Unless the Senate is also captured by the Democrats, we’re likely to see gridlock as Republicans refuse to agree to stimulus to try to hurt the Democrats’ reelection chances in 2024.

Buy and Hold … the Right Stocks

In a situation like this, my advice is straightforward.

If you’ve got some mad money to burn, gamble on Portnoy’s strategy that stocks only go up. But be sure to take profits on the way up or be prepared to lose all your gains.

And by all means, buy and hold stocks. Just don’t choose the ones Dave Portnoy recommends. Choose the ones that old codgers like me recommend in my Bauman Letter portfolio.

Since the beginning of this year, we’ve outperformed the market six-to-one. And that’s before you add in the dividends we’ve locked in by buying at low prices, which are significantly higher than the long-term average.

If you’re looking for a buy-and-hold strategy, Cameron, stop watching El Presidente Dave Portnoy … subscribe to The Bauman Letter instead. 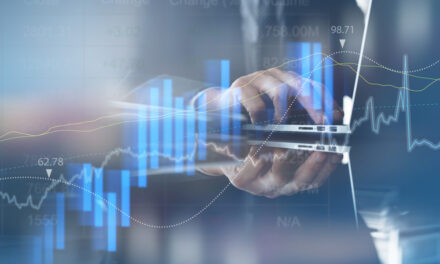