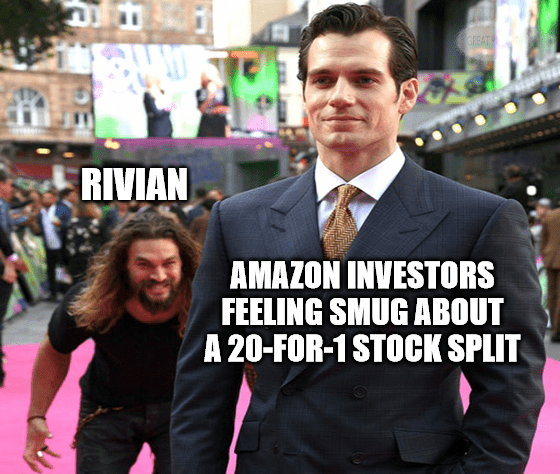 What’s The Deal With Amazon?

It’s time to relax. And you know what that means. A glass of bourbon, your favorite easy chair and, of course, Great Stuff playing on your digital device.

So go on and indulge yourself. That’s right, kick off your shoes. Put your feet up. Lean back and just enjoy the ramblings. After all, Great Stuff soothes even the savage beast.

Great Ones, I hope some of y’all are Offspring fans … or else no one is going to understand that intro.

Anywho… It’s been quite a while since we hit up Amazon in these digital pages. And I aim to correct that oversight today. There’s a lot to cover, so hold on to your butts.

When we last did a deep dive on Amazon, the company had just completed its buyout of major Hollywood studio MGM for $8.5 billion.

Amazon now has quite a stable of MGM movies, TV shows, intellectual property and massive franchises such as James Bond, Rocky, The Handmaid’s Tale, Vikings and Shark Tank.

It also now has MGM’s streaming service Epix, Hollywood-grade production studios and distribution systems. Like Amazon needs help with distribution … but hey, it was a package deal. And for just $8.5 billion, that’s quite a steal.

But we’re just re-hashing old news at this point … and a lot has happened since then. 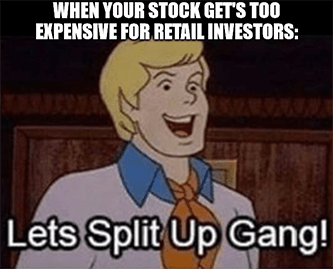 The single biggest news event for Amazon since our last check-in has to be the company’s coming 20-for-1 stock split. That’s a huge move for a huge company, and it will have a major impact on AMZN stock.

I don’t think you’re picking up what I’m putting down here. Right now, AMZN is hovering just above $3,000 per share. Oooh, yes, Amazon. $3,000 per share? We’re all really impressed down here, I can tell you.

At $3,000 per share, AMZN is out of reach for pretty much every retail investor … unless you’re one of those partial-share investors, that is. I don’t want to knock partial-share ownership, but I like to own all of my shares, thank you very much.

So the first thing to know about AMZN’s stock split is that it will open the stock up to a whole host of new investors that were previously priced out of the Amazon market.

A side effect of this spilt will also make AMZN stock options easier to digest. Right now, an at-the-money Amazon May $3,060 call option would cost you $1,695. Only the most daring retail options traders are jumping on that one, I can tell you.

And, of course, one of Amazon’s official plusses for the split is that it will also allow employees who own stock more flexibility in managing their holdings. That’s still not a real employee benefit, Amazon, but whatever.

It’s certainly not one of the union’s demands, but it sounds great for investors!

Right you are, Ken! But wait! There’s more…

As part of the stock split, Amazon also announced an increase in its stock buyback plan from $5 billion to $10 billion. So, split a lot of stock, buy back a lot of stock … investors cash in big!

Woah there, Nelly! Hold your horses for a bit. There is something critical you should know before you rush out and start gobbling up AMZN stock… 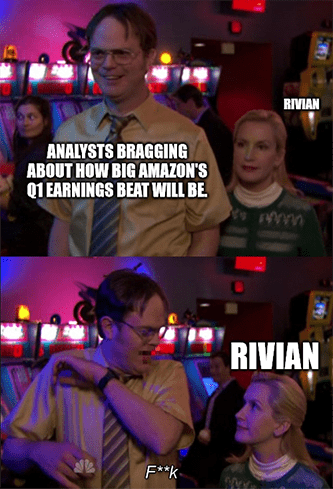 Now, you might be thinking: “What does EV maker Rivian have to do with Amazon?”

Well, if you’re a true Great One reading on the daily, you’d know that Amazon reported an $11.8 billion gain from its Rivian Automotive (Nasdaq: RIVN) holdings for 2021’s Q4. And that is the crux of the problem.

You see, Amazon reported Q4 net income of $14.3 billion total. $11.8 billion of that was an unrealized gain from RIVN stock holdings. “Unrealized” means that Amazon didn’t sell the stock, but that the stock grew in value and Amazon had to report that gain.

Can you see the problem here? Maybe if you look at where RIVN was trading at the end of Q4 — i.e., the price at which Amazon booked the value of its Rivian holdings.

Now, even at that valuation for RIVN, Amazon still would have blown Q4 earnings expectations out of the water. But analysts’ Q1 expectations don’t appear to have taken RIVN into account.

In Q4, analysts were only expecting earnings of $3.61 per share, compared to actual, RIVN-driven results of $27.75 per share. For Q1? Analysts upped their game and are looking for earnings of $9.33 per share.

And Amazon? Well, with its Rivian holdings plummeting in valuation, Amazon could be looking at its first quarterly loss since 2015. What’s more, if you believe some analysts, the company could post its largest quarterly loss in history!

Aren’t you glad you didn’t rush in and buy AMZN stock right now? 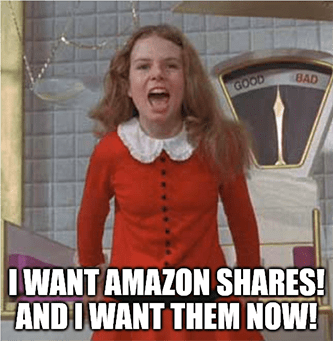 Right! So, the bottom line is we sell AMZN right now!

No! Jeez, you’re always so impatient. But then, a 10+ year bull market with $#!& tons of easy money will do that to you.

No. If you are already holding AMZN stock right now, don’t sell.

But we’re gonna lose money due to earnings!

I hear you, and maybe you could sell some out-of-the-money covered calls to make up for those losses. But any losses that might come from Amazon’s Q1 report — and that’s a big might, given how Wall Street has been lately — are gonna pale in comparison to the gains you’ll make after the stock split.

If you don’t already own AMZN stock, wait until after earnings to buy … or wait until the day of the stock split — which is happening on June 3, a little over a month after Q1 earnings hit on April 28.

I’ll be waiting until then to decide whether or not to add AMZN stock to the Great Stuff Picks portfolio.

Or … you know … heck, I might buy AMZN stock myself and not recommend it here. Thanks, SEC.

There’s a small group of stocks that Chad’s laser-focused on right now. Every earnings season, this tiny group of companies tends to produce obvious buy signals after they report.

If Chad sees a signal line up, he can be confident the stock is set to run for weeks, even months — no matter what the broad market is set to do. And that means BIG gains on call options.

Next week, 10 of his watchlist companies report earnings. There’s a chance that every single one of these names could produce a buy signal.

But if you want to make sure you’re trading Chad Shoop’s highest-conviction, lowest-risk ideas this earnings season — backed by over a decade of data — you’ll want to click here.

As always, thank you for coming to my Great Chat! If you have a stock or investing idea you’d like to see covered in the Great Stuff weekend edition, let us know at: GreatStuffToday@BanyanHill.com. 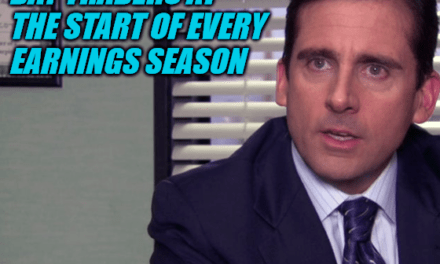 All In A Day Trade’s Work; Hertz Rent A Cell; Incorrect, Not Wrong 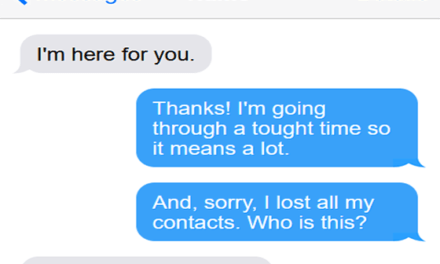