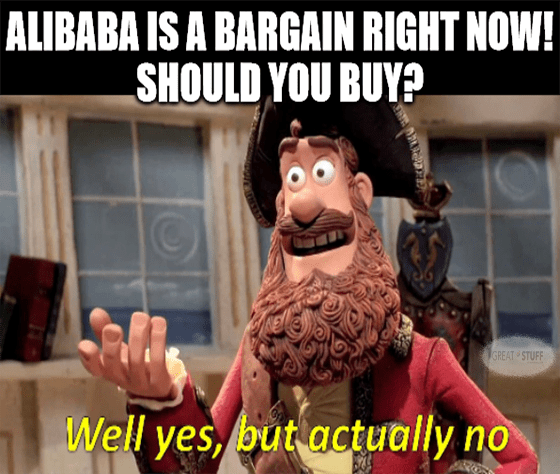 I’m sailing away. Set an open course to save money.

Cause Alibaba (NYSE: BABA) just can’t be free. Free to face a life without China’s Xi.

Over there, he’s the captain. Don’t climb aboard. You’ll wonder about tomorrow or a new Cold War.

I look overseas, sanctions in the waves spark investors to flee. Some happy … but mostly sad. We think of $300 BABA shares, and the dreams we had.

We could have invested happily forever, so the story goes. But a trade war made us miss out on that pot of gold.

But we’ll try the best that we can … to caaaaaaarry oooon!

Is there gonna be any actual information here, or is this karaoke day at Great Stuff?

Sorry, Great Ones. I always get carried away with that song. It’s easy to do, after all.

Where were we? Sailing away?

Right. So, as y’all Great Ones know, I used to be a very big believer in Alibaba … the Amazon of Asia.

The company used to bring in serious revenue growth. It still does, but it used to too. I’m talking an average of 30% to 40% year-over-year revenue growth for nearly its entire life as a publicly traded company.

What’s more, Alibaba’s Singles Day is the biggest shopping event in the world. It’s even bigger than Black Friday and Cyber Monday put together. And Amazon’s Prime Day? Yeah, that’d be an embarrassing comparison … for Amazon.

But something funny happened on the way to global online shopping domination.

The Chinese government ran afoul of U.S. regulations … or did the U.S. run afoul of Chinese regulations? It’s hard to tell with these two. Needless to say, the tit-for-tat trade war of 2018 left a bad taste in both parties’ mouths.

How bad was it?

I’ll leave out the gory details, but both China and the U.S. issued regulations to protect their own markets.

The U.S. Securities & Exchange Commission enacted new exchange listing rules, including strict accounting regulations. In retaliation, China imposed even stricter data-sharing laws that prevented Chinese companies from complying with U.S. regulations, even if they wanted to.

Both cited some form of “national security” concerns … and both have their points, more or less.

All right. Things be messed up, yo. What’s your point?

My point is that while it may seem to fit Great Stuff’s typical MO for investing, you should probably avoid Alibaba stock for a while … maybe longer if you do. 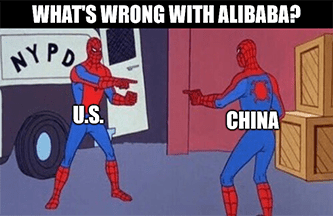 I mean, the company is still making bank despite a minor slowdown in revenue growth in the third quarter. Alibaba only saw a 10% rise in revenue, alongside a 23% plunge in earnings. Most of this miss was due to Asian economic pressures and supply chain issues due to the COVID-19 pandemic.

These concerns will go away in time, and Alibaba could return to its former glory … and its October 2020 highs near $300. It could, buuut….

BABA stock may not be listed on a U.S. stock exchange by that time. Chinese data privacy rules prevent companies like Alibaba from complying with U.S. regulations for financial transparency. If Alibaba can’t find a solution to this Catch-22, a-delisting it will go.

At that point, your BABA American Depository Receipts (ADRs) will be no more, and you’ll have to have access to the Hong Kong exchange in order to buy Alibaba stock.

You see, Alibaba is a very tempting investment. Very tempting indeed. The company continues to grow despite surging competition from the likes of JD.com (Nasdaq: JD) and Tencent (OTC: TCEHY). But even these competitors face U.S. delisting.

The bottom line is that it doesn’t matter how big a bargain BABA stock trades for … if the shares are delisted stateside, you’re still S.O.L.

In fact, until relations normalize between the U.S. and China, I’d be wary of any Chinese investment if you don’t have the financial fortitude to handle a full loss should things go even further south.

At least for right now, it’s much safer to invest in companies that are stateside, like this one Silicon Valley startup:

Using AI to unleash the largest untapped energy source in the world, this little-known company is helping to launch an era of cheap, abundant electricity the likes of which the world has never seen.

Adam O’Dell says that, thanks to this breakthrough, Americans could soon pay next to nothing for electricity (rising utility costs, meet your maker).

Adam just recorded a free video where you can get the whole story. Click here to learn more about this lucrative opportunity. 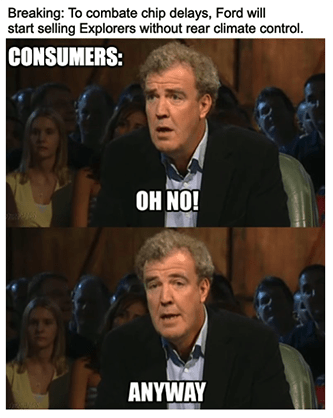 Ford (NYSE: F) execs have devised a fancy new plan for selling cars amid ongoing semiconductor shortages: Skip the missing chips altogether and retrofit them down the line whenever supplies become available.

Dang, you beat me to it! But believe it or not, this move will likely pay off for Ford’s bottom line. For starters, the carmaker can start flipping cars that are ready to roll off the assembly line, minus a few non-critical components.

While Ford will take an initial revenue hit from the reduced price of these nearly completed vehicles (we’re talking a few thousand dollars here per vehicle, tops) it can start pocketing money that would have otherwise been moot had these cars continued to sit around collecting dust.

And let’s be honest: Do you really need rear climate control to cruise around town in your new Ford Explorer … or can you make do controlling your seat warmers from up in the front cabin? ‘Cause that’s the kind of chip circumvention we’re talking about here.

Down the road, Ford could charge customers installation fees for these missing components. I mean, Ford said it won’t … but it could. And anyone who’s dealt with direct dealership maintenance knows how those “quick fixes” tend to add up … especially where labor costs are concerned.

It’s a win-win for Ford and F investors, on top of the carmaker’s already electrifying news that it will launch seven new electric vehicles (EVs) in Europe by 2026.

Of course, Ford is just one of many companies upping their EV capacity. The entire EV market is set to grow 1,400% by the year 2030 … when some 48 million electric cars are expected to hit the highway.

However, we have reason to believe this growth won’t happen without this one critical material.

Right now, there’s only one company in the entire Western hemisphere that supplies this material on a massive level. And yet hardly anyone on Wall Street is covering this company. 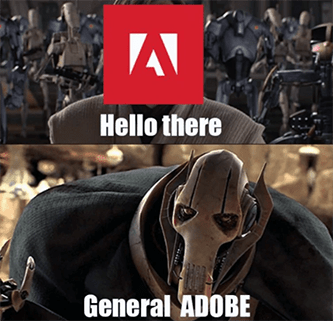 You know how when you’re trying to make a virtual appointment with your doc through their clunky website and nothing works and instead of actually taking care of your health, you just put off making an appointment for another day? No? Nobody?

OK, well imagine that’s you. Now imagine a way to get every doctor’s, pharmacy’s and insurance company’s website … actually working properly. Adobe’s software will (allegedly) do just that, improving how you can interact with health care providers and access information online.

This is all for the “front-end” user experience, mind you. Adobe’s not getting into the market for storing medical records, which is a whole separate lucrative data market in itself — just ask Epic Systems.

Now let’s see if Adobe delivers on the “secure, private, and personalized” part of the experience…

One small company has a patent on this new “bio-chip” — and you can take up an early position in its stock if you act right now. (Click here to learn more.) 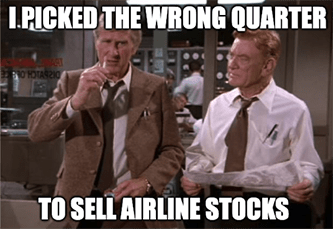 Just a few months ago, these same carriers were crying to their mammas — erm, shareholders — about ongoing COVID-19 concerns keeping wannabe travelers at bay.

But now that Omicron anxieties are on their way out, these once-nervous Nellies have ditched the negative talk and are looking to clear blue skies once again.

For its part, United expects first-quarter revenue to rebound 75% to 80% from three years ago, before the world went to hell in a handbasket. And Southwest says that revenue could recover as much as 92% since the start of the pandemic.

If y’all remember, back in November, I cautioned against cutting ties with airline stocks when Omicron first started making its rounds. In fact, I believe I said: “There’s a good chance this new variant turns out to be a big nothingburger, in which case travel will resume as normal.”

Not to brag (Oh, who am I kidding?) … but I think I’ll take that victory lap now.

The strength of Spider-Man: No Way Home and The Batman, as well as 2022’s promising industry box office, heighten AMC Entertainment’s conviction that we are on a glide path to recovery. — AMC CEO Adam Aron

One of the few Wall Street zombies infected by last year’s meme stock contagion. And it’s one of the few cinema chains I’d actually wager will survive post-pandemic.

When AMC needed that sweet cash infusion amid the pandemic, investors and app-based gamblers alike had AMC’s back, at least monetarily. Great Stuff was mostly there for the memes — can’t forget about those now.

So what do you do now that your business is Spider-Man slinging its way to recovering from a global pandemic that nearly bankrupted the company?

You buy a major stake in a gold miner, of course — Hycroft Mining Holding (Nasdaq: HYMC), to be exact. What else?

AMC and famed metals investor Eric Sprott are each investing $27.9 million in Hycroft Mining, in exchange for units (shares and warrants to buy more shares, in this case). But … why?

Because why not. It’s an obscure penny stock that’s lost money for nearly a decade. This is a literal meme stock gold mine. Hycroft’s sudden cash injection sent HYMC shares up nearly 100% in premarket trading before falling back down to Earth.

AMC wasn’t content with moving on from the meme stock limelight … so it spawned a new meme stock in its own right:

Our strategic investment being announced today is the result of our having identified a company in an unrelated industry that appears to be just like AMC of a year ago.

It, too, has rock-solid assets, but for a variety of reasons, it has been facing a severe and immediate liquidity issue. Its share price has been knocked low as a result.

I sure hope Hycroft is as rock-solid as CEO Aron’s dad joke game … for AMC investors’ sake.

What do you think about AMC’s newfound gold-digging adventure? Are you an OG AMC meme stock trader or long-term AMC hodler? Do you have no dog in the fight but want to ramble on about a completely different topic? Write to us!

GreatStuffToday@BanyanHill.com is where you can reach us best. We’ll see you (and your email) over in the inbox!

Once you’ve checked that out, here’s where else you can find us across the interwebs: 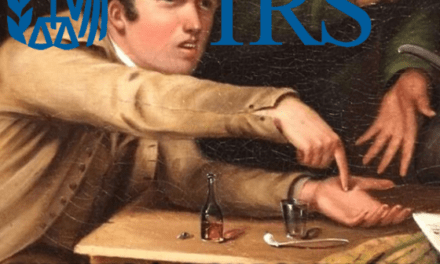 Simmer-Down Sunday: The Time Of The Tax Season 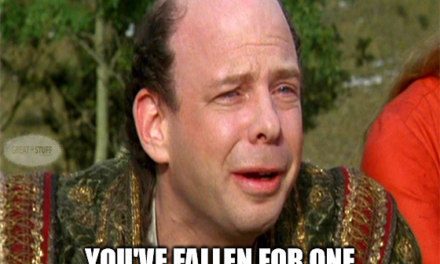