The statement couldn’t be any more bullish…

“What we are witnessing is the birth of a new era in solar,” said Fatih Birol, head of the International Energy Agency (IEA).

Birol was commenting on a new IEA report that said new solar panel installations have increased worldwide by 50% last year. The same report predicts solar-generated power outpacing wind and other renewable energy over the next five years.

The biggest takeaway? The IEA said solar power installations grew at a faster pace than any other source of energy.

Too bad that hasn’t translated into higher stock prices for the major players in the solar energy sector.

A Race to the Bottom

For instance, the Guggenheim Solar ETF (NYSE: TAN), with a portfolio around two dozen companies, is down about 50% since April 2015, and down 90% since its inception in 2008. 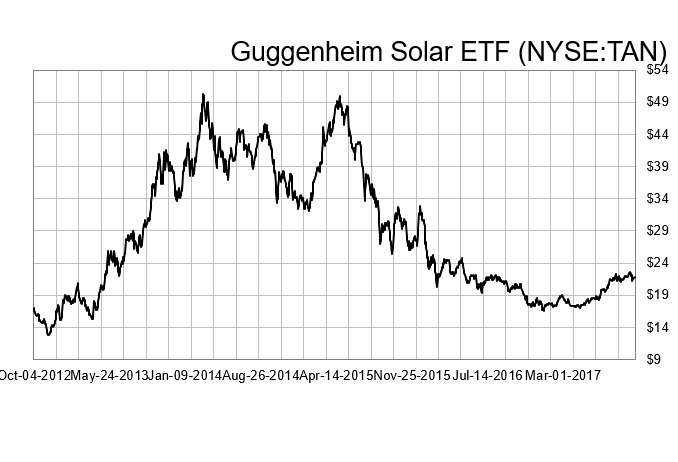 What happened? It’s been a proverbial “race to the bottom” in recent years. Chinese manufacturers ramped up production of solar panels driving down prices.

The National Renewable Energy Laboratory noted last month that the prices for utility-scale panels fell by 30% over the past year.

But the increased production also meant lower profit margins across the industry.

For example, a company like First Solar, Inc. (Nasdaq: FSLR) could rake in a gross profit margin of more than 40% on its panels in 2010. Last year, its gross margin was 24%.

There’s much still in the air with solar. For one, the International Trade Commission ruled a few weeks ago that American solar panel companies were being hurt by the dumping of low-cost Chinese panels into the U.S. market. The Trump administration has until January to ultimately decide what kind of tariff might be imposed on Chinese panels.

On the other hand, from a valuation basis, companies in the sector have never been cheaper.

Is the Sun About to Shine on Solar?

For instance, First Solar is trading at a price-to-earnings (P/E) ratio of less than seven, after  trading at a value above 16 just three years ago.

In other words, Wall Street has priced in the worst for solar panel companies, wherever they are.

And yet the IEA said global solar installations are proceeding at a record pace? And we’re entering a “new era” when it comes to global electricity production from solar panels in the coming years?

The disconnect is with Wall Street. And the risk/reward couldn’t be better.

Investors who want to profit from this trend would be well-advised to buy the Guggenheim Solar ETF as a way to ride the trend higher.

The Next Cyber Victim Is…