With advancements in technology, there are various new ways to track metrics in real time, such as checking traffic via satellites.

That’s exactly what Orbital Insight does. The company sources, processes and analyzes information from satellites and drones.

And a company on everybody’s radar recently has been Whole Foods. Analysts are looking to see whether or not the acquisition by Amazon.com Inc. (Nasdaq: AMZN) has created more traffic for the grocery chain.

The quick answer: not really.

Orbital Insights tracks traffic on a monthly basis via satellites. When we look at that data for Whole Foods, we can see traffic increased by 4.6% in September, which is when the acquisition took place. 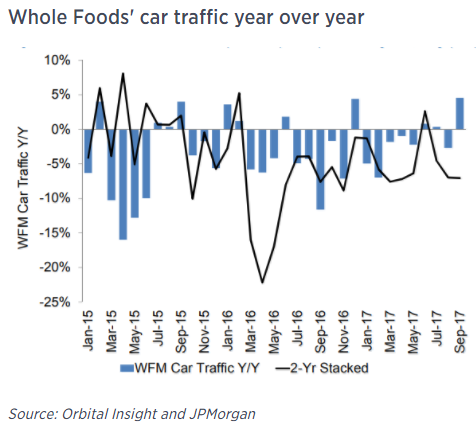 The blue bars represent the percentage change in traffic from the same month a year ago.

So did the Amazon acquisition send traffic to Whole Foods? Yes, but not by an extraordinary amount.

And remember, this is a year-over-year change. September 2016 saw Whole Foods traffic drop off by 10%. So a 4.6% rebound from that low point isn’t all that impressive.

We need some more time to see the effects of the Amazon acquisition, and if Whole Foods is indeed pulling traffic away from other grocers.

I wrote to you after other grocers were tanking on the news that Amazon would acquire Whole Foods. That represented a bargain, and I still believe that to be the case today.

I’ll continue to monitor the traffic into Whole Foods and let you know if any data changes my view.

Don’t Get Locked Out of This $24.2 Billion Trend