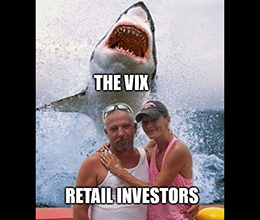 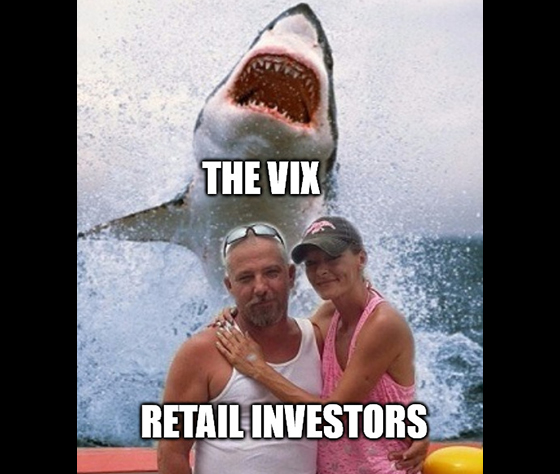 The VIX Busts a Move

This here’s a tale for all investors, tryin’ to do what those markets tell us.

You’re about to get shot down cause you’re overzealous.

Bulls play hard to get, volatility gets jealous.

OK, smarty … where’s the real party? Where can I bust a market move?

I’m glad you asked, dear reader. The real party is with the VIX, VIX, baby.

That’s the CBOE Market Volatility Index (VIX) — aka the “fear” index — for those not hip to Street lingo. So, get ready to stop, collaborate and listen. The VIX is back with a brand-new dimension.

Since about August 17, something has grabbed ahold of the VIX tightly, with the index up more than 22% during this period. Meanwhile, the S&P 500 Index has gained about 5%. Let that settle in for a minute: The VIX has moved higher alongside the S&P 500 Index.

This isn’t supposed to happen. The VIX only rises when investors fear a market downturn or react to a market drop, right? So why is there a rising disconnect between market fear and the real-time market rally?

This year has so many disconnects, I feel like 2020 is trying to find a Tinder date.

At first glance, the VIX’s rise appears to coincide with the Federal Reserve’s decision on interest rates and inflation. But, as Fed Chairman Jerome Powell indicated, the Fed won’t act on that front until there’s actual labor market inflation.

Given the state of the U.S. economy, that might take a very, very long time.

That should be a signal to go all-in on stocks. And many investors are doing just that. But that gets us nowhere on why the VIX is rising. If looking back doesn’t help us, let’s look forward.

Bear with me for a bit, this could get messy…

Futures contracts on the VIX — i.e., bets on where the VIX will be down the road — spiked considerably in October and November. According to Bloomberg, October VIX futures hit 33.5 yesterday, compared to the VIX’s close at 26.1.

“In the history of the VIX futures contracts, we’ve never had an event risk command this sort of premium into forward-dated vol at a specific tenor,” said Bloomberg Macro Strategist Cameron Crise.

If you didn’t catch what Crise dished out, he’s basically never seen the market price in this much risk surrounding a specific event before.

Anyone have any idea what November event could cause such turmoil on Wall Street? Anyone? Anyone? Bueller?

Those of you who clicked the Bloomberg link already know … the U.S. presidential election.

Crise continues, noting that Wall Street is “worried about 2000-style uncertainty,” referring to the George W. Bush versus Al Gore matchup that ultimately was decided by the U.S. Supreme Court.

“You don’t need a particularly vivid imagination to think that that could get pretty ugly this time around,” Crise quipped.

As Great Stuff has said before, “…something bigger than the Fed’s unlimited stimulus has to happen to derail this market rally.” Whether the November election turns out to be “the big one” remains to be seen.

But that doesn’t mean you should be standing on the wall like you was Poindexter. The VIX screams volatility right now, even as the market continues to march higher.

In the city, stocks look pretty. Bulls tell jokes so they can seem witty. Trade some Tesla shares just to get some play, then volatility happens and says “no way!”

The market is faking, goodness sakin’. You need advice that brings home the bacon.

What you need is the ultimate in volatility research.

One shot: One Trade.

Get it now, before it’s too late. 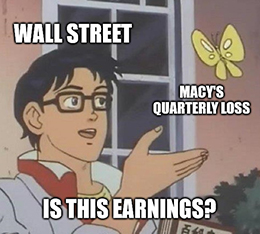 If you need another stitch in the tangled 2020 earnings web we’re weaving … Macy’s Inc. (NYSE: M) takes the spot of “Good” today.

Don’t get me wrong: Macy’s earnings were bad. But … they weren’t as bad as Wall Street predicted, which is all that matters anymore.

A double beat from a near-dead business? Color me surprised on just how low the bar was for Macy’s. Still, these numbers only paint half the picture, as we’ve seen with every other report this quarter.

Macy’s noted that workout clothes and home décor were the “in” items online, though, matching other retailers’ fanfare on the DIY decorating boom and rise in dining room gyms. (Spoiler alert: We’ll touch more on the “overnight athlete” movement in a minute with everyone’s favorite overpriced bike peddler/pedaler.)

But … but … digital sales were up! Macy’s is saved from the department store dump!

Yes, yes, I can picture it now … the three giants of e-commerce: Walmart, Amazon … and Macy’s.

In the meantime, make like everyone else and use up the rest of those Macy’s gift cards online. Why doesn’t Macy’s just sell off those old parade balloons? My backyard is just screaming for a 60-foot-tall Papa Smurf. 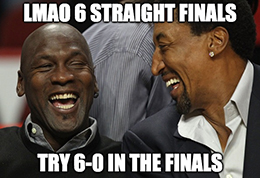 Bo may know sports, but Jordan knows betting. And I hear he knows a thing or two about basketball as well. (It’s a ‘90s day at Great Stuff, apparently.)

DraftKings Inc. (Nasdaq: DKNG) announced this morning that Michael Jordan — the NBA’s GOAT (Greatest of All Time) — will take an equity stake in the company. In exchange, Jordan will provide guidance and advice to the DraftKings board.

Also, Jordan has a long history with gambling, and he’s an avid businessman worth more than $2 billion. So, he should know quite a few things that could give DraftKings an edge in the competitive sports gambling market.

DKNG investors played it cool on the news … like when you’re standing in line for a Jordan autograph. The stock only gained about 5% today and struggled with price resistance near $40.

Clearly, fanboying over Jordan won’t be enough to push DKNG through the $40 hoop … not yet anyway.

Best: Anything but Stationary 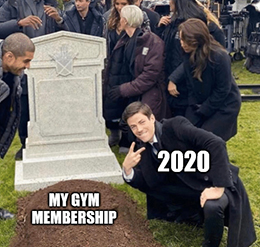 If you told me last September that I’d list Peloton Interactive Inc. (Nasdaq: PTON) as “Best,” I’d call you crazy. It’s amazing how much a pandemic changes things.

With gyms all but dead during this stay-at-home economy, Peloton pedaled its way to the top of the fitness mountain. The stock has nearly tripled this year as workout junkies snapped up these multimedia-enabled bikes to get their adrenaline fixes at home.

In fact, J.P. Morgan believes that Peloton’s biggest hurdle isn’t getting people to buy its pricey stationary bikes but delivering them fast enough. Right now, it takes Peloton about six to seven weeks on average to deliver a bike once it’s ordered.

Apparently, you don’t need large, scenic picture windows to own a Peloton anymore. We’ll see just how well that plays out during next week’s earnings report, but things look stellar right now for PTON investors.

When elephants fight, it is the grass that suffers … usually.

And when retail elephants collide, it is we the consumers who … win?

Someone had to finally stick it to Amazon.com Inc. (Nasdaq: AMZN), with its fast shipping (mostly), subscription services, cloud storage and so on. But who named Walmart Inc. (NYSE: WMT) as the Chosen One for all your TikTok acquiring and shopping subscribing needs?

We’re curious what you think about everyone’s favorite greeter-garnished grocer getting into the subscription game with the Walmart+ service. That’s why our Poll of the Week is a game of … Choose Your Fighter!

In one corner, we have brick and mortar’s ever-believer … and in the other, the Emperor Palpatine of e-commerce. We’re set for a down-and-dirty match as Walmart reclaims lost ground in grocery delivery and Amazon defends its reigning champ title.

Click on the icon below and choose your contender in the retail rampage ring.

By the way, if you were curious, we asked you to play sector selector last week and had you vote for which slice of the market pie we should bite into more often in Great Stuff. Quite a few of you voted to see more from industrial stocks and materials — 3M Co. (NYSE: MMM) isn’t all about making Post-it Notes, you know.

But, as the overwhelming majority of you point out, there’s no such thing as too much tech in these pages. Everybody and their mother tries to pass as a tech company these days, so it shouldn’t be too hard to scratch your itch. Stay tuned as always!

Thanks for tuning in! Before you go…

Have you written us a memo yet?

If you’re new around these parts or feel the creeping quarantine amnesia, welcome! We’re glad you stopped by. Every week, we run through our inbox as you and your fellow readers run the gamut, from market questions, stock breakdowns, economic shakedowns and the occasional investing SOS.

You can reach us anytime at GreatStuffToday@banyanhill.com with anything that passes through that investing mind of yours. Share it with us! 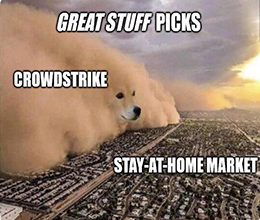 Praise for CrowdStrike’s Beat and Raise; Set Our Inbox Ablaze!