Why U.S. Stocks Will Benefit From Turkey’s Currency Crisis

Turkey is the summer’s crisis.

The country’s currency is in a free fall. Its stock market is crashing. Analysts are warning of dire global consequences.

But Turkey isn’t a big problem. It will even boost the U.S. stock market.

The chart below places the problem in context. This shows the amount of money emerging markets, as a group, are spending to service debts. Lower ratios are better. 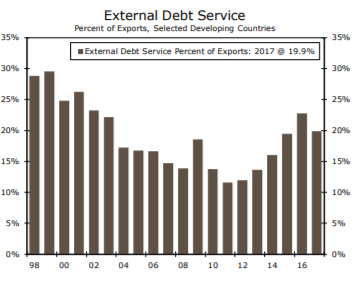 Problems in international economics are sometimes just like problems we face at home. If your mortgage payment or rent requires 30% of your income, there isn’t much slack in the family budget. At 20%, the payment is less of a problem.

That’s why Turkey is different than other global financial crises. Compared to 1997, when a problem in Thailand rattled world markets, emerging markets are in good shape today.

Still, the bears are worried.

There are a few reasons to ignore their concerns. First is the fact that bears are always worried. They often miss good news because they sense doom.

Right now, there are lots of good news. The U.S. economy is growing. Corporate earnings are growing. And, in the long run, earnings drive stock market prices.

Additionally, Turkey is relatively small. Its economy is about 4.6% as large as the U.S. economy.

Even more important, U.S. banks have little exposure to the country, and international trade between the two countries is relatively small.

While Turkey has a small impact on the U.S., it is a “gateway” to Europe. Refugees often pass through Turkey.

That’s a concern. But Germany recently took steps to ease the refugee crisis, and that helps reduce the problem.

But traders aren’t always rational. They might sell Turkey and other emerging markets. They might worry that European banks have too much exposure to Turkey.

That all makes the United States attractive to traders. And that’s why U.S. stocks will be the biggest winner from Turkey’s turmoil.