Home » Investing » Stocks » Trump is a Contrarian Indicator for Investors

Trump is a Contrarian Indicator for Investors

Now, no one person has all that information.

EMH advocates say market prices result from the give and take between all investors in a stock. Each investor has a piece of the puzzle. As a group, they have all the pieces to solve the price puzzle.

According to this theory, news is unpredictable. No one knows the news in advance. That’s why stocks make large price moves after announcing news. This theory explains large gains or losses that follow earnings releases.

The Importance of Trump’s Tweets

It started just weeks after the election. Trump tweeted that Boeing’s bid for a new Air Force One aircraft was too high. The stock fell 1% in minutes.

Trump was just getting started.

In the first week of his term, my colleague Chad Shoop noted the importance of Trump’s tweets. He cited the example of a tweet after Toyota announced plans to build a new plant in Mexico. That knocked $1.2 billion off the stock price.

Other tweets shaved more than $30 billion from Amazon’s market value. One series of tweets blamed the U.S. Postal Service for charging Amazon too little.

Trump’s second-biggest impact came when he questioned the cost of new fighter planes. That pushed the value of Lockheed Martin down by nearly $6 billion.

The Washington Post noted the president tweeted about the stock market at least 68 times since taking office.

This is different. In the past, presidents usually refrained from even commenting on the economy while the market was open.

But the market can adapt to anything. In recent weeks, traders learned to ignore the president’s Twitter feed.

Contrarian indicators tell traders to do the opposite of what’s expected. For example, when everyone tells us home prices always go up, like they did in 2006, it’s a signal that the housing market is set to crash. Contrarians go against the crowd.

Early in his term, Trump’s tweets pushed stocks down. But his recent tweet about Nike came as the stock price bottomed. 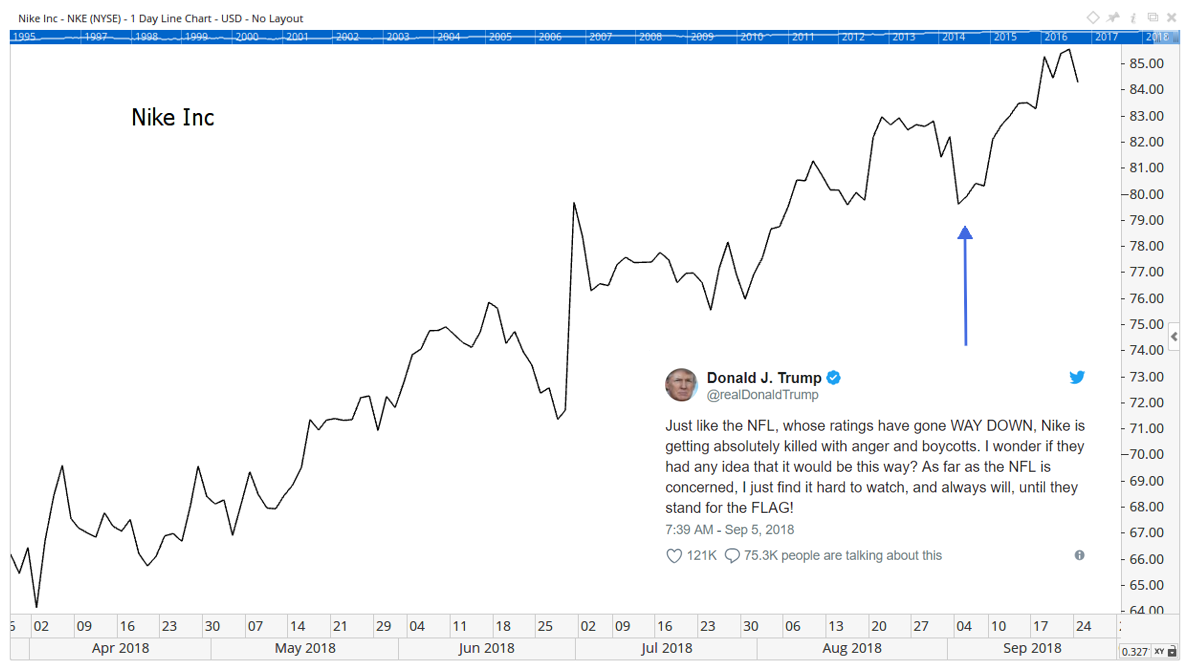 Trump might be hurting the NFL with his opinion about the controversy surrounding the national anthem. But the chart above shows he’s not hurting Nike.

That’s the pattern to trade now.

With earlier tweets, Trump was threatening to disrupt established markets. Questioning the contract for Air Force One would hurt Boeing’s profits.

But it turns out presidential authority over acquisition contracts is limited. So, legally, Trump can’t really cancel a contract like that.

Now Trump is reacting to the news rather than making it. That makes his tweets a contrarian indicator.

When Trump roars in the future, buy the subject of his ire.

Is The Next Bear Market Coming?

The Yield Curve Holds the Secret to the Market’s Health