I’m quite familiar with the paper-based Medicare card.

When I accompany my mom to her routine doctor’s appointments, it’s one the first cards presented to the health care provider for payment.

Over the years my mom has always had a concern with the prominent display of her Social Security number across the front of the card. To her it felt like a security vulnerability.

But rest assured, every Medicare beneficiary has received or will receive a brand-new Medicare card in the mail by April 2019.

This new card features a new Medicare number that’s unique to the beneficiary.

And best of all? The card will no longer feature the Medicare patient’s Social Security number.

This is a significant step toward protecting the identity of the card holders.

Here’s an example of what the new card will look like: 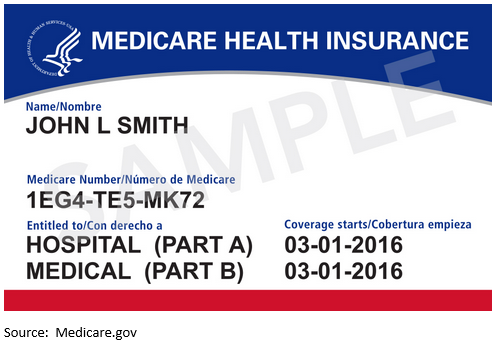 The bill, titled Fighting Fraud to Protect Care for Seniors Act of 2018, seeks to greatly deter the $60 billion in abuse and fraud within the Medicare program with the use of smart card technology.

If the Medicare smart card pilot program is a success, the implementation of these cards will revolutionize the program.

Smart cards are not new to most of us. Since October 2015, these cards have become a major part of our payment transactions.

The U.S. has made strides in implementing the chip and PIN cards, but we still have a way to go.

According to EMVCo, a private chip-based payment card services company, as of December 2017 only 58% of U.S. credit/debit cards are smart cards versus up to 84% in Europe.

So, with Medicare now potentially joining the smart card industry ranks, I decided to research publicly traded companies that are notable players in the overall sector.

One company that stands out is ACI Worldwide Inc. (Nasdaq: ACIW).

Though ACI Worldwide is not a smart card manufacturer, the company develops software products that are used to process transactions involving smart cards.

Based in Naples, Florida, ACI Worldwide is one of the original software companies present at the outset of the smart card boom.

Through the years the company has evolved to be a key player in the global electronics payments system and at the forefront for the future demand of innovative technology called real-time payments (RTP).

A New Frontier for the U.S.

RTP is poised to replace the use of payment cards over time. Popular in countries around the world, the RTP system is a new frontier for the U.S.

Officially introduced to the U.S. in November 2017 via the Clearing House, RTP will facilitate the immediate payment of money from business to business, business to customer and person to person.

It will allow money to transact between parties instantaneously, 24 hours per day, seven days per week.

The full implementation of RTP in the U.S. financial system is expected to take place by 2021. ACI Worldwide’s software will be instrumental in making these transactions work.

With Medicare potentially embracing the existing smart card technology, it’s encouraging to see a company like ACI Worldwide innovating and evolving within that industry and leading us into the electronic and real-time payments future.

Artificial Intelligence Can Save Your Eyesight