Treasury Borrowings Are Signaling a Recession

Recessions are part of the business cycle. They correct excesses that occur in economic expansions.

The current cycle will change from expansion to recession someday. That day may be close.

No matter when it comes, the United States is in trouble. 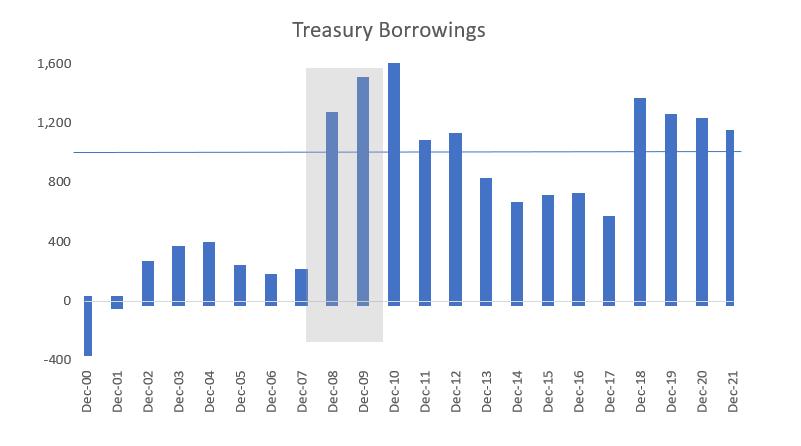 Bars show the amount of money the U.S. Treasury borrows every year. In 2000 and 2001, the Treasury was paying down debt. But that changed as defense spending jumped after 9/11.

Then the recession began. Government borrowing soared to more than $1 trillion a year.

But that was OK. That’s what government is supposed to do. Government spending in a recession offsets weakness in the business cycle.

The problem is that the Treasury is now borrowing more than $1 trillion a year. Yet there’s no recession. When the recession starts, Treasury borrowing will grow.

Borrowings increased 593% in 2008. A similar jump now would mean borrowing $9.2 trillion in one year. That seems impossible.

It means the next recession will be deep.

A 2009 book called This Time Is Different: Eight Centuries of Financial Folly researched this problem. It showed what happens when recessions start while government debt is already high.

That’s based on research covering 800 years. The name of the book comes from the fact that policy makers always say “it’s different this time” when economists show there are problems ahead.

But history shows the next time is never different. That’s based on 800 years of history.

It’s not a good idea to bet this time will be different. So the U.S. is going to face a deep crisis soon.

Did the Economic Boom Leave You Behind?