On Sunday, the United States once again embargoed Iran’s oil production. The rest of the world will be barred from access to U.S. credit if they continue to buy oil from the country.

That will cut around 2 million barrels per day from the market.

It’s already starting. At the end of September, Iran’s exports fell 900,000 barrels per day from April 2018. You can see what I mean from the chart below: 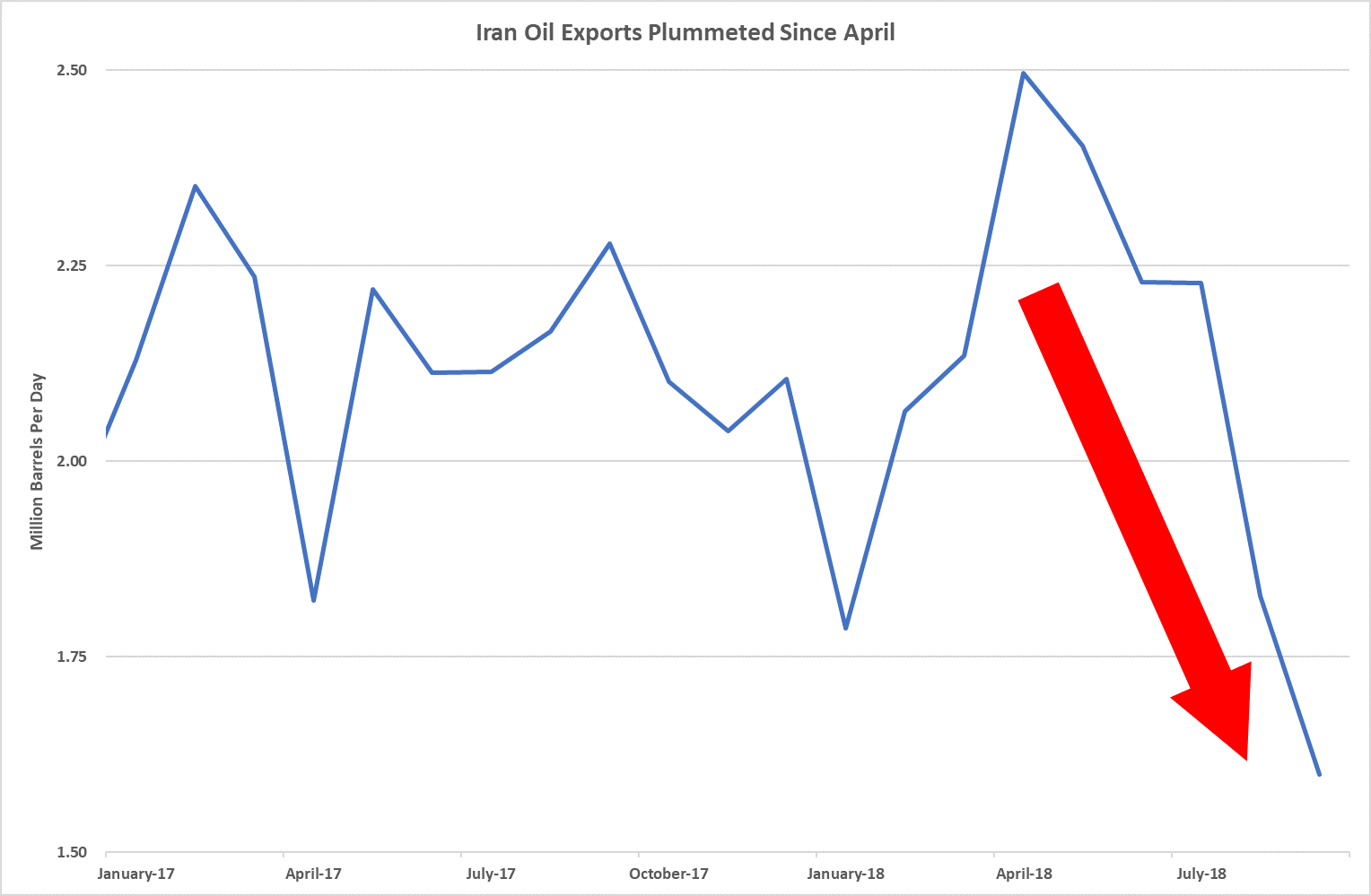 Traders saw the data and realized that the rest of the oil market accommodated nearly an extra 1 million barrels per day. And that was without much trouble.

However, contrary to popular belief, there is zero evidence that Saudi Arabia is going to keep oil prices this low…

My phone started ringing last week from folks in the media looking for quotes on why oil was falling.

The market assigns three main reasons for its fall: The U.S. will allow some countries to keep buying oil from Iran, global demand will fall due to the trade war and Saudi Arabia says it will produce more oil.

The first point may be correct. The U.S. may give waivers to some countries to buy Iran’s crude oil to avoid disrupting their economies. Because sending fuel prices soaring is a great way to bring on recession.

However, the second reason … that somehow Saudi Arabia will keep a lid on oil prices … well, that’s malarkey.

For some reason, the world seems to take Saudi Arabia at its word that it will produce more oil. The problem is, the kingdom can’t do it.

Let me show you what I mean.

In the last decade, the most oil Saudi Arabia ever produced was 10.6 million barrels per day.

The kingdom kept that up for two months: July 2016 through August 2016. That was its effort to kill off the U.S. shale industry and Canada’s tar sands.

It didn’t work. But it did show us Saudi’s top-end production.

Here’s the most important part: That’s only 130,000 barrels per day more than it’s producing right now.

The country quietly ramped up production to offset Iran’s decline. So, of Iran’s 900,000 barrel per day export fall, Saudi Arabia made up 630,000 barrels per day.

Over that same period, U.S. production jumped by 871,000 barrels per day. That’s an astonishing volume from the U.S. oil industry. It’s the most ever.

In summary, the relief we got for the loss of Iran’s 900,000 barrels per day won’t be there for long. And we could see as much as another 1 million barrels per day come off the market.

Saudi Arabia can’t fix that. Neither can the U.S.

When traders realize that, oil prices will soar.

Invest in Oil for Defense

You absolutely must hedge your risk of higher oil prices.

As I’ve said before, this is all about defense. If the oil price goes up, it’ll cost us more for gasoline, more for services, more for travel.

Taking a position in oil right now is a good way to protect yourself against higher prices down the road.

Are Oil Refiners Due for a Correction?