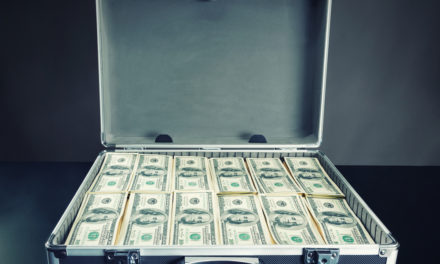 Remind me again why we are bailing out corporate America?

More and more Americans are starting to ask that simple question.

The mainstream media are quick to answer for us…

America’s biggest companies are essential to our national prosperity!

This is an unusual crisis!

We need to protect these businesses, so they’ll still be there when we recover!

Or so we’re told.

But that begs another question: If these companies are so important to all of us, why do we allow them to be run so badly?

Take The Boeing Co. (NYSE: BA). The crisis-ridden behemoth begged Congress for a $60 billion bailout … almost exactly as much as the company spent on stock buybacks over the last decade … buybacks which contributed nothing to the company’s competitiveness or financial health.

And if you’ve seen yesterday’s Your Money Matters video, you know why Washington is far more likely to bail out companies like Boeing than you or me.

This raises a bigger question … will the U.S. economy finally change its ways when the dust has settled?

The Past Is Prologue

Palihapitiya said the U.S. economy was riddled with “zombie companies” that didn’t deserve bailouts. The only reason they still existed was because the Federal Reserve’s cheap-money policies had propped up a decade-long bull market in corporate debt.

And now the Fed is stepping in to rescue corporate bond markets again, rather than let overindebted, unprofitable companies fail … while allowing Main Street businesses and wage earners to go bankrupt.

The right thing to do, Palihapitiya said, was to let these losers declare bankruptcy and reorganize themselves after the crisis on sounder footing.

Wapner was aghast. Corporate America, he argued, is essential to all Americans. This is no time to quibble about the past.

I beg to differ.

This is exactly the time we should be examining the past … because that’s what set up this disaster in the first place.

A Fool and His Money…

In an article published last week, Leo Strine Jr., the retired chief justice of the Delaware Supreme Court — the most important venue in U.S. corporate law — framed the issue this way:

Families are encouraged to put aside a reserve to pay their mortgages and bills and to feed themselves in case of an emergency. Why don’t corporations do the same? After a 10-year economic expansion that led to record increases in earnings, plus huge corporate tax relief, American corporations should have had substantial cash reserves to sustain them during a short period without revenue. But many did not, and instead were highly leveraged, lacked adequate reserves and lived paycheck to paycheck, so to speak. What happened to that cash?

In many industries, almost all of it went to stock buybacks. Their purpose was to boost share prices … and executive bonuses along with it.

For example, over the last 10 years, the biggest U.S. airlines spent 96% of their free cash flow on stock buybacks. American Airlines lost money over the period, but still managed to buy back $12.5 billion worth of shares by borrowing cheap money in bond markets.

If the airlines were households, it would be as if they spent 96% of their take-home pay on luxury goods.

And now they come begging for bailouts.

They are not alone. Fifty percent of the free cash flow earned by the top 500 U.S. public companies went to stock buybacks over the last decade.

But buybacks are only part of the story.

Even more important — but less understood — is the dramatic growth in U.S. corporate debt.

With yields in Treasury bond markets so low, and with Wall Street awash in cheap Fed money, institutional investors bought up corporate bonds. As a result, the total amount of nonfinancial corporate debt in the U.S. has more than doubled since the financial crisis:

With money so cheap, and with investors so desperate for yield, many U.S. companies have been able to continue operating even though they make no profit at all: 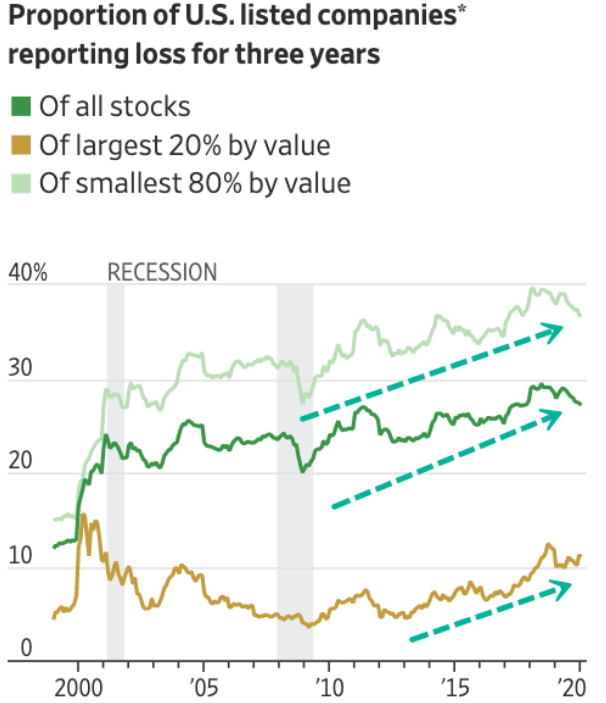 The only reason these companies exist is because they generate interest income for Wall Street investors.

Many of these same companies — and the hedge funds and other institutional investors that lent them the money — are the ones loudly demanding bailouts right now.

The “solution” to 2008 the financial crisis was to make finance as cheap as possible for Wall Street and the corporate sector. Policymakers believed they would invest it in growing the real economy and creating jobs.

Eventually, employment did peak. But it took almost a decade. And most of the jobs created were unstable, low-wage and without benefits … the 13 million people who filed for unemployment in the last three weeks can testify to that.

The truth is that most “investment” in the U.S. economy over the last decade was in debt, not real-world economic capacity.
We are now facing a situation where the same players need the same bailouts so that they can resume the same game.
The question is … do we want to keep playing it? 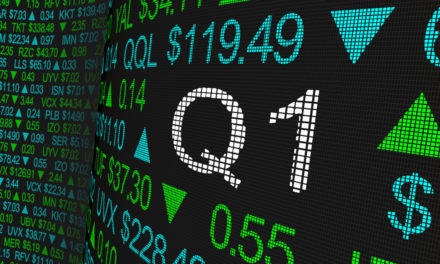