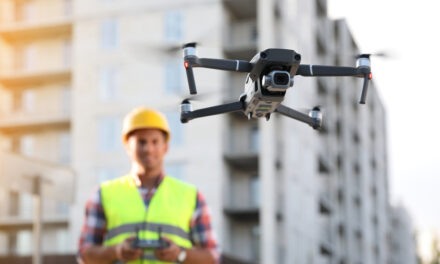 “We’ve been hearing about drones delivering our Amazon packages for years … and it hasn’t happened,” John said.

Our team was chatting about revolutionary tech the other day. And someone mentioned drones.

John, someone on our research team, immediately reminded them that we’ve heard these promises before.

And he has a point: Commercial drones have been around for over a decade. But today, anecdotally, they’re mainly used as toys or as camera mounts. The “best drones to buy” lists are dominated by those that carry cameras best.

People pull them out to show their friends the sky-high view in the back yard. Some photographers and videographers love them. And … that’s about it.

Amazon still hasn’t launched its Prime Air delivery fleet. Meanwhile, companies like Domino’s Pizza use them as marketing stunts. All in all, we’ve still only seen a handful of “test locations” globally where drones are making regular deliveries of anything.

“We still don’t know how economically and environmentally sound the concept of drone delivery is compared to ground transport,” the founder of the Study of the Drone at Bard College, Dan Gettinger, told the Smithsonian in October.

For all the hype, drones delivering your lunch are still some ways off.

Getting revolutionary technology off the ground (no pun intended) isn’t as easy as some people think.

So, what’s the real secret? How do you know when a disruptive technology is really going to change our lives, and make us a profit?

Well, there’s a clear journey an innovation needs to follow…

Investment research firm ARK Invest broke down what it takes for real innovation to break out.

And here’s the crux of real disruptive innovations: Until they can get into the hands of the everyday person, they’re really not that disruptive.

Let’s use the internet as a true example of revolutionary tech making it into our hands.

Today, the internet is humming all around us — even in humdrum objects we’d never expected to be connected to the web. Things like smart toasters, speakers, doorbells, fridges … you name it.

We can safely say that this innovation affects the lives of everyday people.

And that’s the first criteria for a truly important innovation: cutting across sectors and geographies.

As we said, drones are really only useful in the photography and videography industries. Most others are sold as toys. And they’re almost exclusively sold to people with disposable income. That doesn’t sound like cutting across sectors to me.

The internet is in our homes, our offices and our schools. It is an essential service. And the government is pushing it into even more rural areas for this reason. Some in Congress have gone on record to say that they feel the internet should be treated as a necessity, not as a luxury.

And it’s reaching more people than ever: 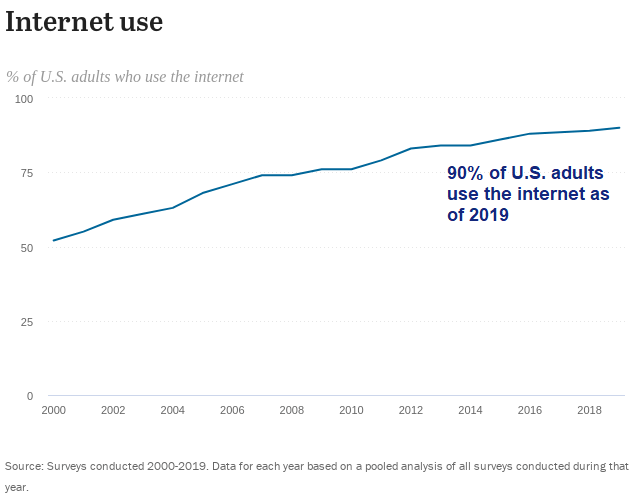 Even more importantly, technology companies trust the internet more than ever before. Cloud computing — storing information on internet servers rather than on your own computer — could only have been built on existing internet infrastructure.

New disruptive technology like cryptocurrencies are based on internet technology, too. One of our favorites, PayPal, couldn’t exist without secure internet connections between people and stores.

That’s the second criteria: serving as a platform for other innovations.

But what about affecting everyday people?

The reason that more and more people are getting connected to the internet is simple: cost.

The government is subsidizing internet infrastructure across the country. One estimate says that the costs to use internet services have fallen almost 20% since the late ‘90s.

Federal and local governments are paying to push the internet even further into low-population areas. That means connecting to the internet is likely to keep getting cheaper.

And that’s the third criteria: cost declines and increased demand.

A professional video drone could set you back anywhere from $400 to more than $1,000. And while the toy versions are more affordable, they are just toys. Until delivery drones really roll out — or the professional drone costs come down — it’s not likely that we’ll see much more demand than what we already see.

The internet, though, ticks all these boxes.

When you’re looking for an innovation that’s going to be truly revolutionary, that’s set for true long-term profits, you need to look for these criteria.

How to Spot the Real Innovators

Flying drones don’t hit our criteria here. They only work in one or two applications — they don’t support other innovations, and the cheap ones aren’t in very high demand.

Now, one day, that may change. Drone technology could come to a point where it really does become a revolution. After all, the internet didn’t get where it is today overnight.

Drones aren’t alone. Ride-hailing apps like Uber also have a lot of potential. But until they’re widely available in more communities, they won’t be a real revolution. But just like the internet, they may, one day, be undeniable parts of our lives.

Until we see these technologies become more mature, we’ll stick with the innovations that are already making waves. Otherwise, we’re just making speculations on what might happen without proof. And that’s not what we do here.

The truth is that when you’re looking to invest in true revolutionaries, you need someone to guide you.

In fact, Charles Mizrahi has been following a number of truly disruptive technologies for his readers. There’s one sector he’s been tracking for years … and he has found four different stocks that could change the world. Even better, one of them is still below its buy-up-to price.

You need to see how to get these reports here.

Thank you, as always, for subscribing to American Investor Today. It’s because of you that we get to do what we love each and every day. 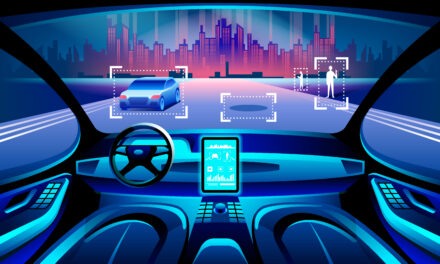