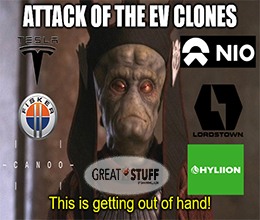 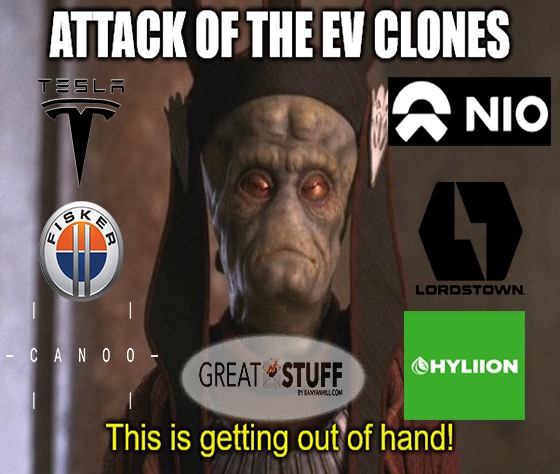 Attack of the EV Clones

I’ve come to a conclusion, Great Ones.

I initially sat down to tell you about the latest in Apple’s (Nasdaq: AAPL) electric vehicle (EV) saga. It seems that — according to the always reliable “people familiar with the matter” — the iCompany talked with Canoo (Nasdaq: GOEV) about producing an Apple car long before it hit up Hyundai (OTC: HYMTF).

Ironically, nearly every company tied to the rumored Apple Car is soaring … except AAPL. Both HYMTF and GOEV soared on the reports.

But then, I thought … Canoo? What in the H-E-double hockey sticks is a Canoo? Another EV company? Did someone just spread EV Miracle Grow around all willy-nilly? These things are popping up like weeds!

I don’t have to be Nute Gunray to know that this is getting out of hand. Just how many EV companies are there? Is there an EV company factory on Mustafar I don’t know about?

There’s Tesla, Nio, Lordstown, Hyliion, Fisker, Workhorse and Canoo (new to me … new to you?), just to name a few. Plus, there’s Faraday, which is in talks to SPAC itself into the market soon for around $3 billion.

I naively thought about listing them here but stopped when I got north of 15. I mean, go ahead and Google “EV SPACs.” The list is staggering; that’s just too much for one edition of Great Stuff.

Seriously, don’t write in just to tell me I missed your favorite EV flavor. I know I missed it … that’s the point!

Or better yet, do write me at GreatStuffToday@BanyanHill.com and tell me all about it. I’m curious just how many Great Ones are mixed up in this great EV market overload.

The market leaders are already apparent. Tesla (Nasdaq: TSLA), despite its considerably overvalued stock, controls a commanding lead in the EV market. Nio (Nasdaq: NIO) is truly revolutionary with its customer service and swap-out battery systems.

The rest all clamor for a piece of that greatness. But there’s a serious disturbance in the EV force, so to speak. The great American auto giants are waking up from their long (self-imposed) slumber.

Flying. Freaking. Cars. Finally! I’ve been promised these since the ‘80s.

You’re going off the rails on an EV train here, Mr. Great Stuff. Simmer down and get to the point!

My point is that few of these EV companies will survive. Many will go bankrupt and fade away. Some will crash and burn in an electric haze. Others, the ones with truly innovative tech, will get bought out.

Tesla will survive. Nio is sheltered by the Chinese government. GM is too well capitalized … and it’s too big to fail, remember?

Plus, I’ve always said that if GM ever pulled its head out of its … ahem … it has the manufacturing firepower and industry clout to take the EV market by storm. GM is the OG death star in the auto market. And it appears that the slumbering giant finally woke up.

That leaves the rest of the EV market scrambling to carve out their niche … to find a way to be relevant in this burgeoning, brave new world — even if that relevance is just enough for a buyout by a bigger fish.

But, before all that happens, we’ll likely see a dot-com-level correction hit the EV market. The hype is just too great for the EV-making clones to ever live up to.

That’s why Great Stuff has shied away from actual automakers in favor of industry powerhouses that don’t care which EV maker wins out. In other words … battery tech and the innovators therein.

If you want to tap into the force flowing through the EV market, click here to find out more.

Good: By the Power of Hydrogen! 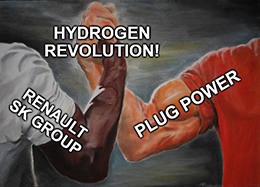 The only thing bigger than EVs right now is hydrogen. I’ve said it before, and I’ll say it again: Hydrogen is the future of clean energy.

The pair are poised to launch a 50-50 venture to make hydrogen fuel cell cars in France.

“We see this as a validation of (Plug Power’s) technical ability in both electrolyzers and fuel cells,” said analysts at Jefferies. The brokerage reiterated its buy rating and lifted its price target from $50 to $73.50.

So, for those keeping score … that’s one South Korean fuel cell partnership and one French partnership. Plug truly is establishing itself as the global leader in hydrogen fuel cell power.

I love it when a Great Stuff plan comes together! Great Stuff Picks readers who bought PLUG back in October now sit on a 360% gain. Congratulations! (It feels like I’m saying that a lot lately…)

Better: Bring It on Home 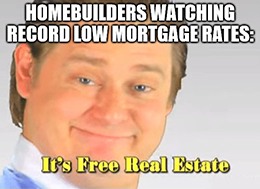 The first of many stocks to shine beneath the earnings spotlight this season, KB Home (NYSE: KBH) killed it last quarter.

Revenue for the homebuilding hotshot came in at $1.19 billion — a 23% decrease compared to a year ago, but it still beat analysts’ expectations for $1.15 billion.

Earnings also came in lower than last year, totaling $1.12 per share, but that also beat expectations for $0.93.

That’s all fine and dandy … we’ve been used to lowered pandemic expectations for a few quarters now. So, what I’m looking at is KB’s growing backlog of orders — all those building projects it has set up. It’s not quite free real estate … but it is future profit in the company’s crosshairs.

KB’s backlog at the end of 2020 is the highest it’s been since 2005 — 7,810 homes, or about $2.96 billion in potential future revenue. Though, KB now finds itself in the sticky, tricky throes of powering through a persistent pandemic.

On one hand, the ever-looming ‘rona and its work restrictions throw a wrench into the homebuilding part of KB’s business. On the other, it’s never been a better time to be a homebuilder … or at least one that’s already deep-rooted in housing like KB.

Cheaper-than-dirt mortgage rates will continue to support housing market growth. Aging (and dwindling) housing supply will push homebuyers toward the “new construction” route instead of hunting through the scrapheap of old, decrepit houses still left on the market.

That plays right into KB’s hands, and it’s why it saw a 42% year-over-year increase in fourth-quarter net orders. KB slightly increased its land acquisitions throughout 2020 to compensate, and if KB can make its way through that backlog, it has a gold mine waiting for it in 2021. 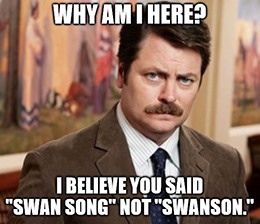 On December 30, Great Stuff declared that 2021 would be the year Intel (Nasdaq: INTC) finally turned around.

Back then, I quipped:

Heck, we may even see CEO Bob Swan pushed toward the exit. One can hope… He certainly hasn’t stopped AMD’s Lisa Su from eating his lunch.

It looks like I was right. Swan is out. Intel announced that Swan will step down effective February 15. VMWare (NYSE: VMW) CEO Pat Gelsinger is taking over. Hopefully, Gelsinger can keep Lisa Su and AMD (Nasdaq: AMD) from taking Intel’s lunch money.

For more than a year, AMD siphoned desktop and data center market share away from Intel. What’s more, AMD threw down the gauntlet at this year’s CES, setting its sights on the laptop market with Intel-beating Ryzen processors.

Intel desperately needed to do something … and Swan proved he isn’t the leader to do it. Unlike Swan, Intel’s former Chief Financial Officer, Gelsinger has an extensive technical background. Before he led VMWare, Gelsinger was Intel’s Chief Technology Officer.

INTC soared more than 10% on the news before profit-taking edged the shares lower into the close. As for Great Stuff Picks readers … you sit on a gain of roughly 16% in less than two weeks!

Last week, we talked up the supposed return of the Jedi — erm, value stocks in 2021. Personally, I’m still holding out for the Jedi…

Anyhow, our last Poll of the Week — “Are you betting on a 2021 value stock comeback?” — was a lot more evenly split than any of us here expected. About 39% of you are sticking with the growth gang, while another 34% of you eagerly expect sanity and value to roar back … as much as value stocks roar, anyway.

I didn’t forget all 27% of you still entrenched in the value trenches since the beginning. Honestly, I expected many more of you to vote “growth” all the way. Maybe that’s just last year’s bullish exuberance wearing off.

Still, Great Stuff is leaning heavily toward the “value” end of the spectrum this year. We rounded out 2020 with three new picks:  Intel, Disney (Nasdaq: DIS) and Boeing (NYSE: BA). All three contenders are primed, poised and prepped for the post-pandemic recovery. INTC alone is already up 16% in two weeks, so don’t say I didn’t warn you…

If you missed it, you can catch up right here.

So, the question is … did you buy into Great Stuff’s “road to recovery” picks? Click below and let us know!

If you’ve got more to share on the value versus growth situation … by all means, speak your mind!

GreatStuffToday@BanyanHill.com is where you can spin the yarn on the give-and-take game of valuations. We’re diving headfirst into those murky inbox waters tomorrow, so you have just a wee bit longer to make sure your voice gets heard.

Remember, you can send us a message anytime with all those thoughts that can’t be summed up in a mere poll. Write to us at GreatStuffToday@BanyanHill.com! 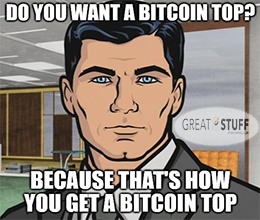 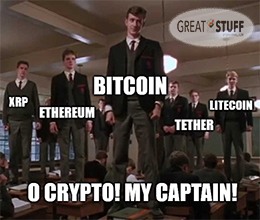