Three weeks ago, I wrote that the oil sector was screaming “buy me,” noting the negative headlines and the fact that so many hedge funds had packed up and moved on from their bullish positions earlier in the year.

And now? Lo and behold, via Bloomberg: “The Smart Money Is Starting to Pour Into Energy Stocks.”

It’s no surprise that, while hedge funds and private clients are still selling after being burned by their previous extreme bullishness, the big institutional players, like mutual funds, pension funds and the like, are starting to put their long-term money to work.

They’re looking at charts like this one, from the International Energy Agency (IEA), showing the rough-stairstep gains in world oil demand quarter-by-quarter…. 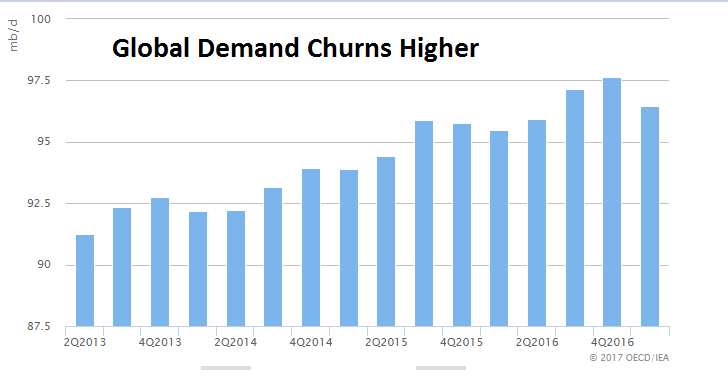 And on the production side of the equation, they’re looking at the same sets of data that I noted in early July, namely that “unconventional” oil producers — U.S. shale frackers — can’t keep up the pace. And with Venezuela’s situation becoming even more unstable, it’s likely that global oil production will tick lower as this OPEC country descends deeper into societal chaos.

The limitations of shale-oil production are being exposed, as it is becoming clear to the market that light shale oil cannot totally replace Venezuelan heavy oil, and the [Energy Information Administration] reduced U.S. production estimates for May by a substantial 150,000 barrels a day.

A good way to play this trend for the long term would be with the iShares U.S. Oil & Gas Exploration & Production ETF (NYSE: IEO) for a 30% gain over the next 18 months. In April 2015, with oil trading at $60, the shares of this exchange-traded fund were priced at $80. Today they’re trading for nearly 30% less.

And while you’re putting your money to work (and still reading uber-bearish headlines about oil), keep one fact in mind from BP’s recent “Statistical Review of World Energy” report: Global oil consumption growth averaged 1.6 million barrels a day in 2016, which was above the 10-year average of 1 million barrels a day for the second year in a row.

Meanwhile, China, and to an even larger degree India, continue to add to incremental demand, putting further strains on the oil market, with higher prices to come.

In fact, I have an energy company in the Total Wealth Insider portfolio that’s up 35% in the last 18 months, riding this same trend of rising oil prices as the world market rebalances from one of excess supply to higher-than-expected demand.

Will There Be Enough Corn to Meet the Oil Industry’s Demand?