The Entire Oil Sector Is Screaming: ‘Buy Me!’

I don’t put much stock in news headlines (probably because I used to write them in my days as a financial journalist).

So when I read lots of energy stories with a uniformly grim outlook, like…

…it’s just a reminder that sentiment is as important as fundamentals (maybe more so).

And by that measure, the entire oil sector is screaming: “Buy me!”

For example, back in January, with oil prices having doubled to $53 a barrel in 12 months’ time, I cautioned that “you’d have to go all the way back to 2014 to find a point when traders were as bullish about oil prices as they are now.”

In February, oil prices hadn’t moved any higher, but expectations certainly had.

Out of every 13 traders making bets in the oil futures market, 12 of them were bullish, according to data from the Commodity Futures Trading Commission. I don’t know about you, but in my book, any rowboat with that many people leaning on one side is bound to tip over.

Six months later — with a 15% decline in oil prices — and guess what? All those bullish oil-trading hedge funds have packed up and moved on. The number of oil bulls is a lot more reasonable now, running closer to a 2-to-1 margin.

The Pause That Refreshes

If anything, the picture for oil prices at $60 or higher by year’s end is only brighter.

What about America’s legion of shale frackers, you say? Aren’t they the perennial spoilers for higher oil prices — adding yet more supply at OPEC’s expense?

Yet according to the U.S. Energy Information Administration’s well productivity data, America’s most important “unconventional oil” region — Texas’ Permian Basin (which contributes an estimated 2.5 million barrels a day) — is close to getting tapped out.

Look at the red box in the chart below. Drillers are putting ever more straws into the Permian’s crust — the rig count more than doubled since 2016. But look at the downward-trending brown line — those new wells’ production per rig — and it’s clear drillers are pumping harder and harder, and getting less and less. 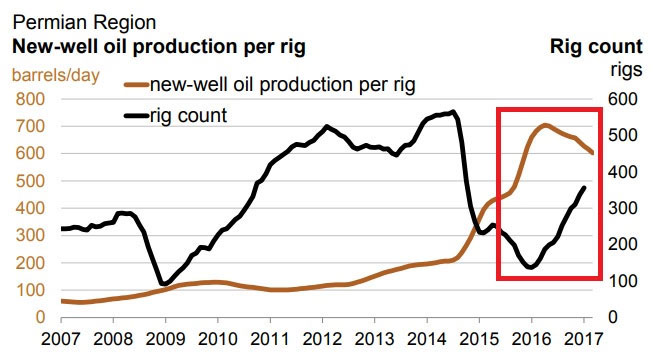 When you average all those new wells alongside the fast-depleting “legacy” wells installed in prior years, the average well in the Permian region in June produced 15 barrels less oil on a month-over-month basis.

As Fuelfix.com noted, that’s an “ominous milestone for companies that have touted increasingly efficient and productive drilling as a way to offset the financial pain of low oil prices.”

It’s also an ominous development if your expectation is for oil prices “lower and longer.”

Meanwhile, nothing else has changed for oil prices since I wrote about oil in January. Back then, HSBC was warning that “spare capacity” — the extra supply of global oil on hand — could shrink to 1%, a razor-thin margin of 96 million barrels a day.

On Monday, by coincidence, the CEO of Saudi Aramco predicted an oil supply shortage in coming years because oil companies cut billions of dollars’ worth of exploration and development projects since 2014’s plunge in oil prices.

And what about on the global demand side of things? In case you haven’t realized, Europe’s economy just posted its best quarter in at least six years.

In India — where the economy is now growing even faster than China’s — a batch of reforms on goods and services taxes in India is expected to drive that nation’s economy to new heights. At the start of the year, the respected Platts energy service said it expected India’s oil consumption to rise by 7% to 8% in 2017 alone — the equivalent of roughly 4 million barrels a day.

My overall point? Now is a good time to be a contrarian and start buying oil stocks.

Editor’s Note: There’s a precious metal that’s about to become the most fought-over commodity on the planet — more than land, water, gold or even oil. However, a small group of geologists have struck the mother lode … a deposit so big that it could solve the shortage crisis. Click here to learn what this metal is … and why this discovery could be worth hundreds of billions of dollars.

This Segment of the Oil Industry Is Booming Right Now

The Smart Money Is Nibbling at Oil