Past performance is not a guarantee of future performance. Yet the past is the only guide we have to the future.

This is important to remember when we face “unprecedented” market conditions. A little thought usually uncovers precedents for anything.

There’s even a precedent for something as unprecedented as tax reform under an unloved president. And the precedent is bullish.

President Ronald Reagan made tax reform a priority in his second term. This led to a series of dramatic stock market rallies. 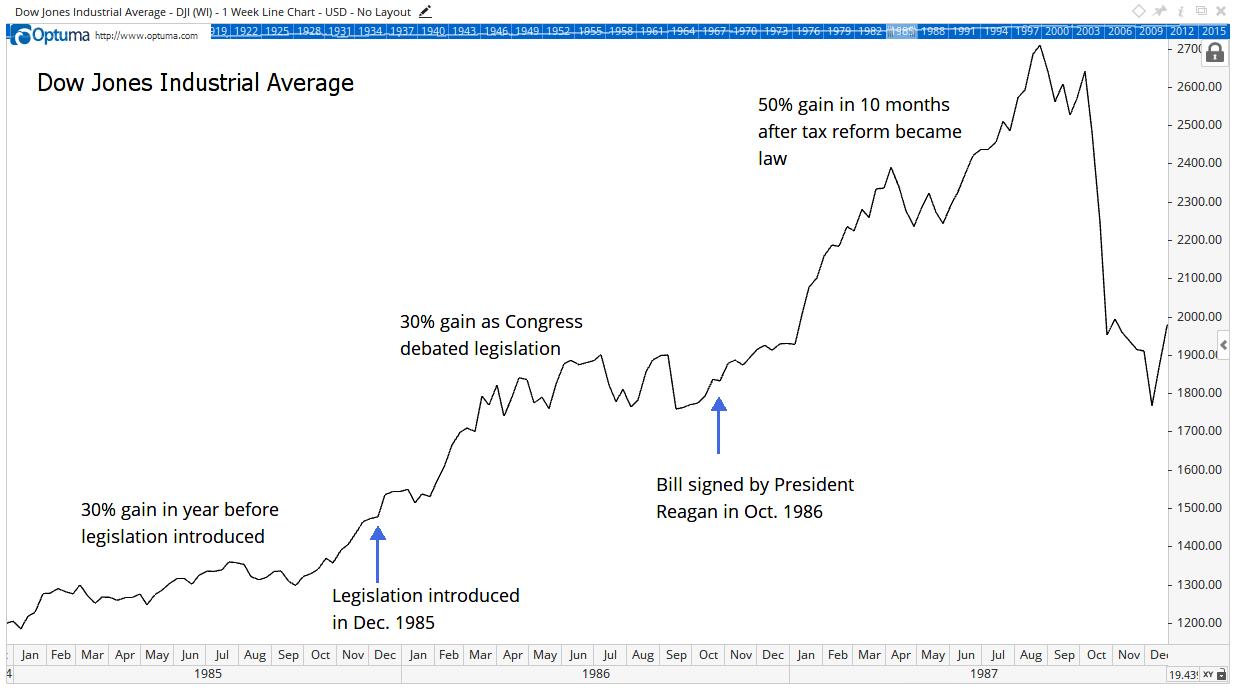 As talk of tax reform built, the Dow Jones Industrial Average rallied 30%. A second 30% rally unfolded as Congress debated what reform would look like. A 50% rally followed the passage of the law.

Eventually, stocks crashed. A year after Reagan signed the law, the Dow dropped 22% in one day. But there was a “meltup” before that meltdown occurred.

Right now, we’re at the point where the second tax-reform rally began in 1985. The biggest gains lie ahead of us if Congress delivers on reform.

If Congress fails to act, stocks will probably move right to the meltdown phase. This makes the current environment riskier than average.

An ideal strategy for risky environments is to buy call options. Calls give the buyer the right, but not the obligation, to buy shares of a stock or exchange-traded fund (ETF).

The expiration date sets a deadline on the option. If the stock or ETF is below the exercise price when the option expires, the option loses all its value.

No matter what happens, the call buyer can never lose more than they paid for the option.

Calls are generally cheap. Many contracts cost just a few hundred dollars. That’s the maximum loss on the trade.

Owners of a stock or ETF can lose more, in dollar terms, than option holders. That’s especially true if tax reform fails and the market crashes.

Now is an ideal time for investors to learn more about options.

If the Dow soars, the right call options could gain 100% or more. If the Dow crashes, the call option can’t lose more than a few hundred dollars.