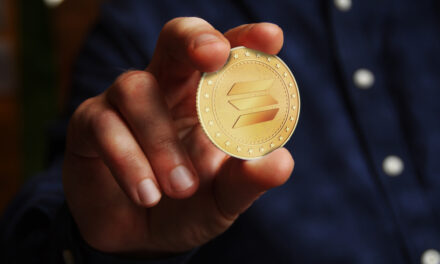 Solana is an up-and-coming blockchain that launched in April 2020.

It offers an incredible 59,000 transactions per second (Ethereum can only do 17 per second), and it costs virtually nothing to transact.

In today’s Market Insights video, Steve Fernandez and I discuss what happened with Solana this week and what it means for the crypto markets going forward.

In this week’s YouTube video, we’re going to talk about what happened with the Solana network this week. Incredible story here.

Steve, tell us about the Solana network and exactly what it is, and then we’ll talk about the big outage that happened on Tuesday.

Steve Fernandez: Sure. So, Solana is a proof-of-stake blockchain. Basically, there’s a series or a network of people or robots that are validating transactions, and that’s proof of stake.

In this case, Solana has really been an up-and-coming blockchain for the last year or so. I think it launched in 2020 at some point. But the value of Solana is that it’s very cheap and it’s fast. So, I know that you and I saw really early that Solana had some upside because of that.

I mean, I want to show you this chart here that compares Solana to some of the other blockchains that you may or may not have heard of. 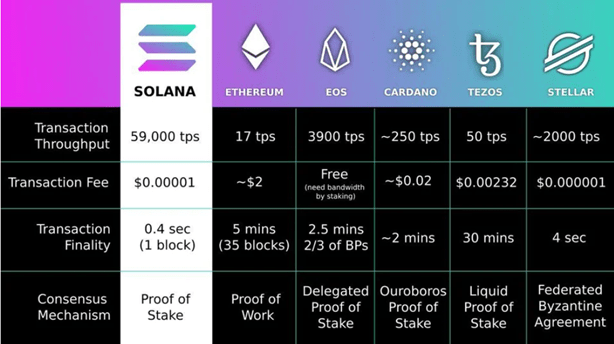 And, you know, this chart is a little bit old. I think the transaction fee is a lot higher for Ethereum now. It shows 10% here, but you can see Solana is fast and virtually free.

So, I’m sure you have something to say about this recent crisis for the Solana blockchain, where it was down for about a day. What are your thoughts on that?

What happened when Solana was down?

Ian: Yeah, I mean, I’ve seen just in the last couple of months there’s been a lot of investors who were focused on decentralized applications on Ethereum migrating over to Solana. And you can see that Solana’s price has gone from basically $40 per token all the way up to, I think, $220 at one point. 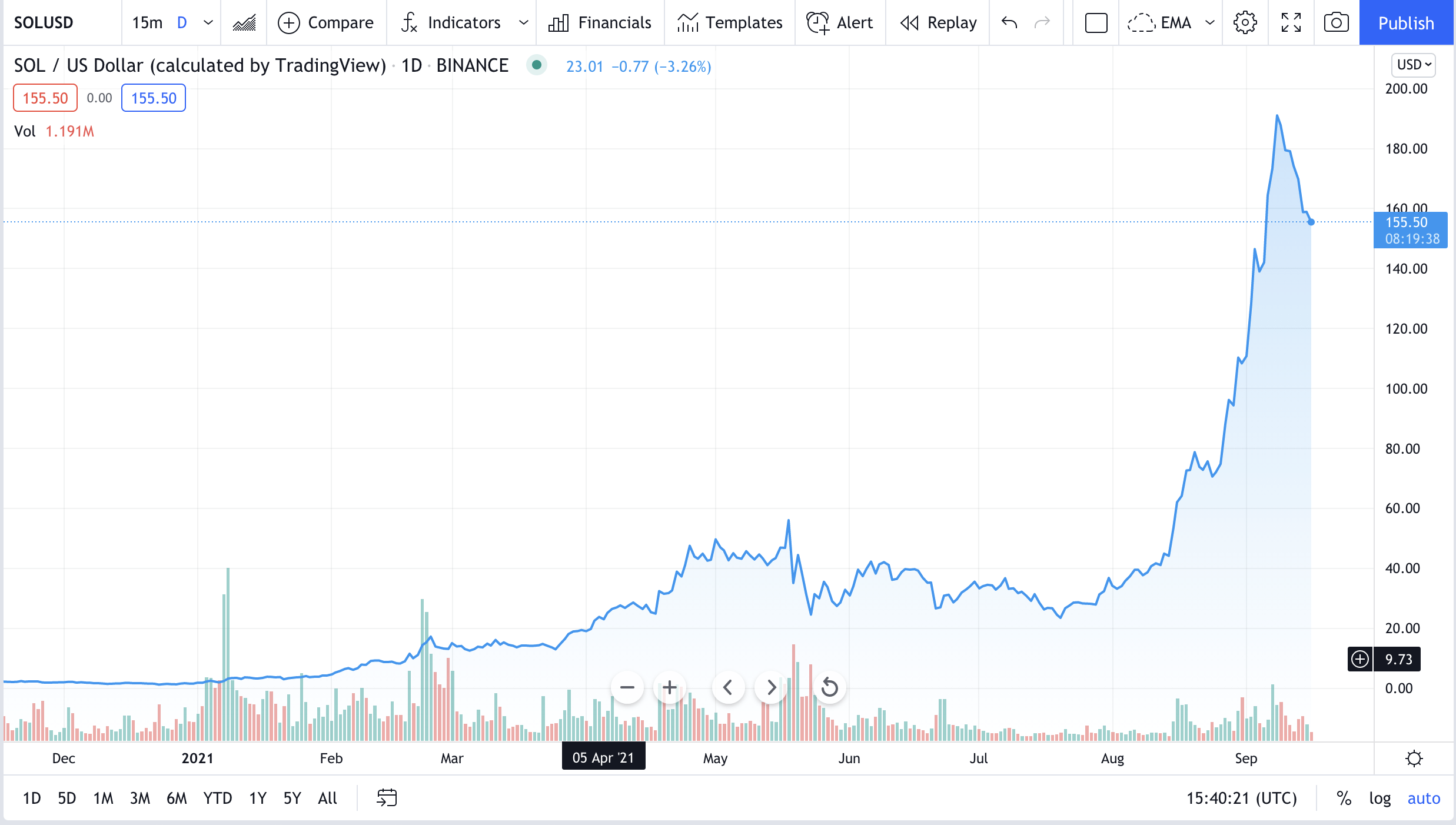 But earlier this week, there was a new token launch on the network. And when these launches come, it’s basically first come, first serve. So, if you’re fast and you’re a flash trader or a bot, you’re going to get a bigger allocation of this new token that’s built on top of Solana.

And now we have — like in the equity markets — we have these high-frequency traders, right, that are always kind of jumping into the market. And these bots essentially sent 400,000 transactions per second and overloaded the network. Because of that, they had to take the network down.

They basically shipped some new code and then had all the validators come down off it, and then turned it off for a bit and then turned it back on. And that took about, I think, 15 hours. It never came back until around 1 a.m. in the morning.

But, you know, there was concern when the network was down. What are the ramifications of this?

There’s a whole DeFi ecosystem built in Solana. And when the prices start moving in the DeFi ecosystem, you have to worry about when it opens up and there’s one asset that’s down significantly against another. It’s going to create margin calls. And these are algorithmic margin calls.

So, it could cause sort of a financial panic, not unlike what we’ve seen in the regular markets when you hear of a bank that’s gone under.

And there were worries that if the price dropped too much in Solana or some of the other DeFi ecosystem, everything would go haywire. But, you know, I think this is a growing pain, Steve.

I mean, we’ve seen it before with Ethereum. These networks are new and relatively untested. They’re very lucrative when you can invest in the tokens early. But I think from going from zero, where they were a couple of years ago, to putting the world’s digital resources on a smart contract, it’s not necessarily going to happen overnight, and there are going to be some bumps in the road.

What do we expect from Solana?

Steve: I agree 100%. With any major technology or website, you know, Facebook, whatever, starting out, I mean, a lot of times they’re not equipped to handle the rapid growth that some of these protocols, in this case, are going to see.

I think the outage that we saw in Solana could end up being a good thing. And the only reason I say that is because, you know, as Solana continues to grow — as we expect with the rapid speed and low cost we covered earlier — A) the stakes could have been higher at some point in the future if this problem never happened, but B) it really shows you that there’s a lot going on, and a lot of people want to get exposure to these new token offerings, so much so that they’re spamming the networks with attempts to get an application.

So, I think that’s a good problem to have now. I didn’t hear too much bad news about cascading liquidations, like you mentioned. So, it sounds like it could have been a lot worse. But I expect that the network will ultimately be stronger because of this. Solana implemented something behind the scenes that will kind of mark these robots when they’re spamming the network and proactively block them.

So, you know, knowing that the network got up to about 400,000 transactions per second at the point where it was essentially down, I mean, it kind of goes to show you that this network is the real deal.

What happened with Solana on Tuesday is basically something that we don’t know we don’t know. It’s an unknown unknown. And I think when you start eliminating those things from an investment environment, it gives investors more confidence in the future.

So, you can think of an unknown unknown being like a financial crisis or like a bank liquidation. It sort of comes out of left field. No one saw it coming, and the markets sell off. This is what happened with the Solana network.

And it’s not much different than what happened with Ethereum. In 2016, Ethereum tried to do what’s called a decentralized autonomous organization (use that at a cocktail party) where basically they were building a community on top of Ethereum of certain investors that were participating in this investment. And there was a big hack, and there was $50 million of value stolen from this decentralized autonomous organization, which now is worth about $15 billion.

But, at the time, the Ethereum community had a choice to believe in the immutability of the network and the fact that when something happens, it’s final — there’s a finality to blockchains, which makes them so effective you can’t reverse anything — or to do something for the greater good, which was to fork the chain. And they chose to fork the chain.

That’s why you have Ethereum Classic, which is actually the original Ethereum chain. And then you also have Ethereum, which everyone trades.

Ethereum Classic, by the way, I know a lot of people write in about it. It’s basically a dead chain. There’s nothing going on with it. But the price seems to go up when the rest of the cryptocurrency market rallies. It’s usually a sign that we’re reaching the end of a rally when things like Ethereum Classic and Bitcoin Cash start rallying. It’s sort of the end of the rally.

So, I think, like you said, this is a good thing for the Solana network. It’s a good thing for all Layer 1s, meaning these are the smart contract protocols that are going to be necessary to basically put the world’s data and digital resources on blockchains. And it eliminates the unknown unknowns.

Of course, I’m still bullish on the protocol. I think it’s going to be one, like Ethereum, that tackles a lot of the big decentralization problems in the future.

Steve: Absolutely. Yeah, I mean, you described resilience there, and I’m sure a lot of our viewers, if they follow crypto at all, they’re aware of how Ethereum’s price has really rallied since that hack.

I think the upside here is that Solana wasn’t hacked, right? It was an outage based on activity alone. It’s not like they had a bug in their code that exposed crypto investors to potential loss. It was really just, “Wow, this grew faster than we expected, and we weren’t prepared.”

So, again, I think that Solana will probably be a top two blockchain. And if the crypto world didn’t favor legacy blockchains like bitcoin and Ethereum, I could see it being No. 1 at some point.

So, I think it’s interesting that this happened, and we should be keeping an eye on it.

Ian: When you’ve got more people trying to get in the stadium than you can fit in the seats, it’s a good problem for blockchain to have.

So, let’s leave it there.

We’re happy to talk about anything, except maybe we won’t talk about Cardano. All right, Steve? That’s one thing, right?

So, that’s it for myself and Steve Fernandez. Thank you for tuning in, and have a great weekend everyone. 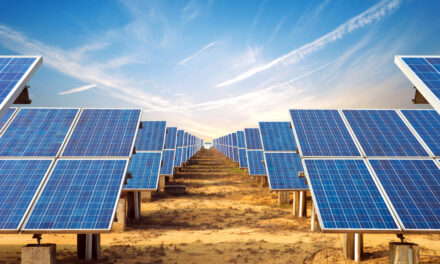 Biden’s Solar Power Plan Is Good for the Economy 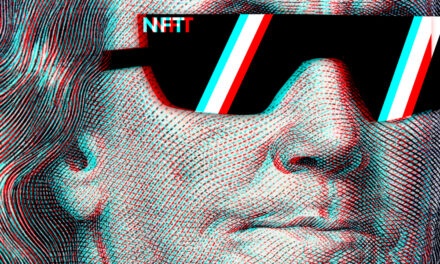 Poll Results: Have You Bought an NFT?