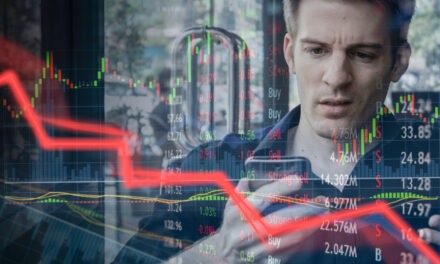 Sentiment indicators describe how investors feel about the market.

In this video we look at two of them.

Both show that this current stock market isn’t a bubble, at least not yet.

Why Sentiment is Important to Investors

A lot of investors look at indicators like momentum or valuation. These are certainly important. But there’s more information about the market that is often overlooked, and that’s sentiment.

This is how investors feel about the market. And it’s important to consider that because, for investors, feelings often translate to actions.

Now, there’s a number of indicators that are used to track sentiment.

The American Association of Individual Investors has a long history of tracking individuals. The National Association of Active Investment Managers has a shorter history, but it looks at professionals.

Their surveys may be overlooked by some investors because they’re not based on price action. But they tend to lead price action.

And surveys are actually a widely used technique. Economists use them. And the surveys of economists, at least those maintained by the Philadelphia Federal Reserve, tend to have some degree of accuracy.

So, if you ignore sentiment, you could be missing out on an important piece of information.

Sentiment, as I noted, drives prices. And this formula shows why.

It simply shows the current market price (the character on the left side of the equal sign) is equal to an opinion factor (sentiment and valuation).

Now, sentiment, the factor on the far right, is squared because it determines whether the market is above or below its fair value.

If sentiment is bullish, investors are buying, and they’re pushing prices above calculated indicators of fair value. So, sentiment is what determines whether the market is going up or down, and whether it’s overvalued or undervalued.

Sentiment, in other words, determines momentum and valuation.

The most widely used application is as a contrarian indicator. So, as a contrarian, you assume the majority is wrong. When everyone is bullish, you’re bearish.

So, there’s a certain appeal to that kind of logic.

Now, looking at the surveys, AAII has a long history.

It’s the same question: “Over the next six months, do you think the market is going up, down or no change?”

Current answers are largely in line with historic averages. 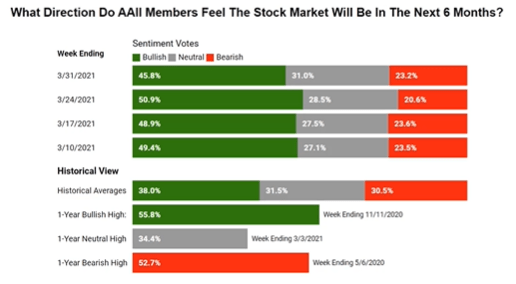 History shows the most important number in this set is “neutral.” Those are the investors with money on the sidelines.

When that number is higher than average, we tend to see stocks go up. So, until that number falls low, none of these readings are extreme enough to really get concerned about.

We could see prices continue to drift higher in the current market. That’s because professionals are also slightly bullish. 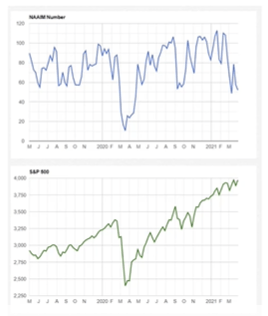 Here we see the NAAIM number. That’s the percent exposure, and it varies from zero to 200.

As you can see, the blue line (the NAAIM number) closely tracks the S&P 500 Index in direction.

So, we’ve seen a mild sell-off. Members are now underexposed to the market, just at about 50%. That means they have a lot of cash. They have potentially enough cash to more than double their exposure to the stock market because many use leverage.

This is slightly bullish.

Overall, research shows that high neutral ratings are the most bullish. So, the data isn’t really telling us that there’s anything to worry about.

Sentiment shows that additional gains in the stock market are possible for now.

There’s room for more upside, which would shift sentiment. And that’s what we need to be watching for. 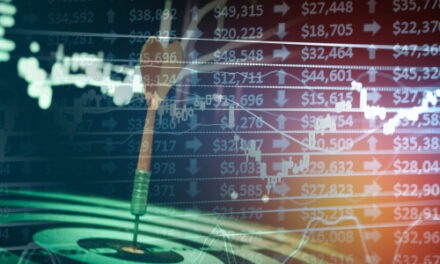 Do YOU Think Stocks Are Oversold?