Home » Investment Opportunities » Your Heating Bill Could Get Much Higher Soon

Your Heating Bill Could Get Much Higher Soon

Natural gas is the new go-to source for electrical power. And the price of natural gas could become more expensive in 2018.

Natural gas spent many years running a distant second to coal as a fuel for electricity. That wasn’t due to its properties. Natural gas is an excellent fuel that releases just two molecules of water and one of carbon dioxide when burnt.

Coal was dominant because it was cheap and portable. Natural gas was expensive and tough to move without pipelines. Then the shale revolution swept the U.S. in the 1990s.

The price of natural gas plummeted. Pipelines went in all over the place … and natural gas displaced coal for the top spot.

Part of the success of natural gas was the ease of power generation. Coal power needs to run continuously. That’s why companies built giant plants right at the coal mine. It was easier to run power away from the plant than to keep trucking in fuel.

However, natural gas is an on-demand fuel. Need electricity fast? Just power up a gas turbine, which is like an oversized jet engine.

That makes natural gas the perfect partner for alternative power sources like wind and solar. If the wind doesn’t blow, fire up a turbine. If it’s dark out, do the same.

And while the price of natural gas rose since March 2016, it just hit its lowest price in over a year. That doesn’t jibe well with the current trend in natural gas, which is down.

As you can see in the chart below, the supply of gas in storage peaked at the second-lowest level since the Energy Information Administration began keeping track of that data: 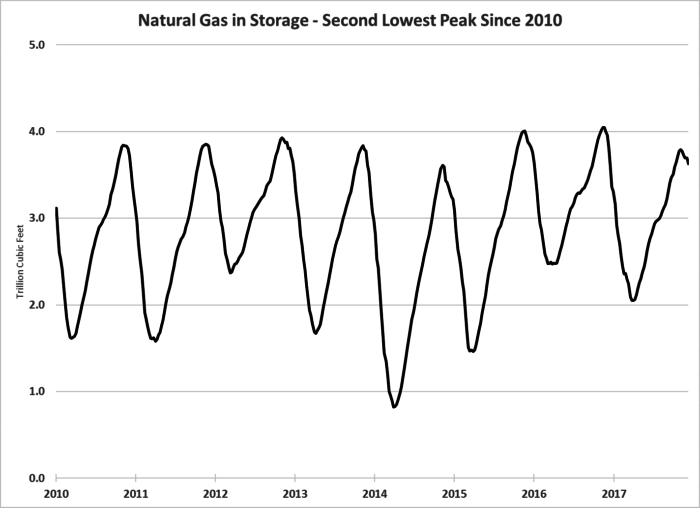 You see, each year, natural gas production goes into storage all summer. Then each winter, we use the supply to generate electricity, heat our homes and cook our food. As you can see, except in 2014, the recent peak is the lowest since 2010.

While 2014 was notable for a deep drawdown in natural gas, it also featured much higher prices. That could repeat itself in 2018.