Though it may not feel like the tech bubble of 1999, there are clear similarities between then and today.

One similarity is investor expectations of the market.

According to the Bank of America Merrill Lynch Fund Manager Survey, fund managers are the most concerned they’ve been about markets being overvalued since 1999. And like in 1999, they’re also largely expecting global profits to improve. 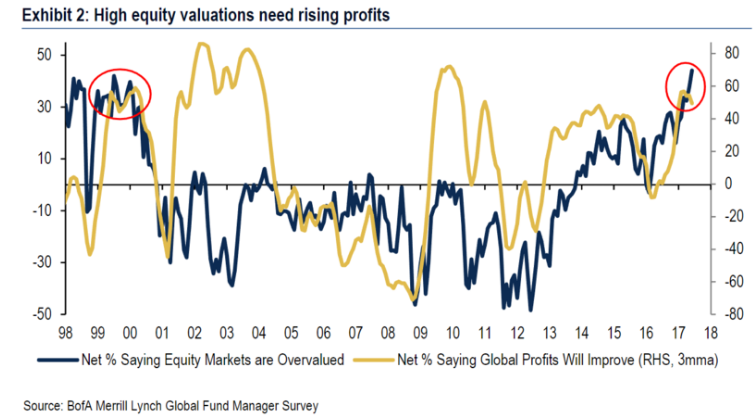 And we all know how it ended then.

The Nasdaq Composite Index, which represents mostly tech stocks, peaked in March of 2000. What followed was a 77% decline for the index — one of the worst bear markets in recent history.

Tech stocks are once again at record levels, and even though it doesn’t quite seem as euphoric as it did in 1999, the sentiment is eerily familiar.

P.S. My team and I devoted over 1,000 man-hours and more than half a million dollars to create my new Earnings Drift research service. We backtested it time and time again with reams of market data and nearly a year’s worth of test trades … and the final results are almost too good to be true. Click here to sign up for the Earnings Drift webinar and learn about my service’s breathtaking accuracy.