Yeah, yeah, I know. The world of bricks-and-mortar retail — and its mall-owning retail landlords — is supposed to be dead, vaporized by the alien mothership known as Amazon.

But retail REITs didn’t die. They didn’t fade away.

They were just revalued to a price level that made better economic sense.

The situation today is exactly the opposite of almost 18 months ago, in September 2016, when I warned that REITs as an investment class were at peak valuation.

What was the tip-off?

The seemingly harmless news that REITs were about to become the 11th official investment class by the folks at Standard & Poor’s.

That shouldn’t be a big deal, but my “irony indicator” hit the red zone. Why? Well, as I noted back then, REITs were perceived as “bulletproof investing vehicles.”

I’ve seen it happen again and again in my career as a financial journalist and investor. When the media start writing up stories about “can’t miss” investment sectors, it’s time to run for the hills.

You already know the story since then. 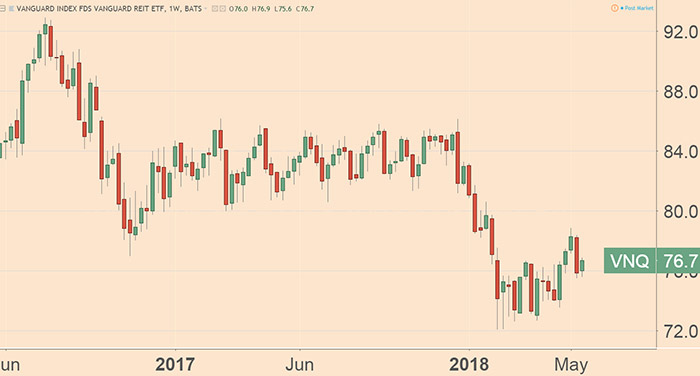 At the same time, interest rates basically doubled — the U.S. 10-year Treasury note’s yield rose from a historic low of 1.5% to a recent high of 3.1%.

I expect the exchange-traded fund (ETF) to rebound sharply from here.

The rise in rates is already baked into the price of most REITs, yet the Vanguard ETF and instruments like it are selling for not much more than their book value at this point. Basically, that’s the “garage” sale price if you were to sell the entire company, all its assets, at an auction.

Likewise leading REITs such as Simon Property Group Inc. (NYSE: SPG), with its shares 23% lower since mid-2016. The mall developer now sells at a price-to-earnings (P/E) ratio of 23 — very close to its all-time low P/E ratio of 21, set in March 2009 (when the stock doubled in price in the next six months).

I have another best-in-class real estate retail stock recommended to Total Wealth Insider subscribers that pays an even bigger dividend yield, and trades at its lowest P/E value in more than a decade. Meanwhile, it continues to pump out that critical measure of REIT financial health — FFO (funds from operations) — at levels well above Wall Street estimates.

The point is, the past two years killed off the weakest, poorly led store chains and forced owners of retail real estate to pare back their portfolios to their strongest properties.

It’s left the strongest stocks in the REIT sector selling at valuations not seen since the worst days of the financial crisis — which means it’s a great time to buy this unloved sector.