This Natural Resource Uptrend Is Unstoppable

It’s much more simple and important. The next boom in natural resources is copper.

Copper demand is soaring. You know the story. Electric cars, municipal-scale batteries and millions of other electronics out there. They all need copper.

While we know the story, the numbers are incredible. The price of copper is up 44% in the last two years.

If you don’t have a position in copper mining, you should buy right now.

A Huge Problem for the Copper Market

Monthly demand for copper rose 82% since January 2000, as you can see from the chart below: 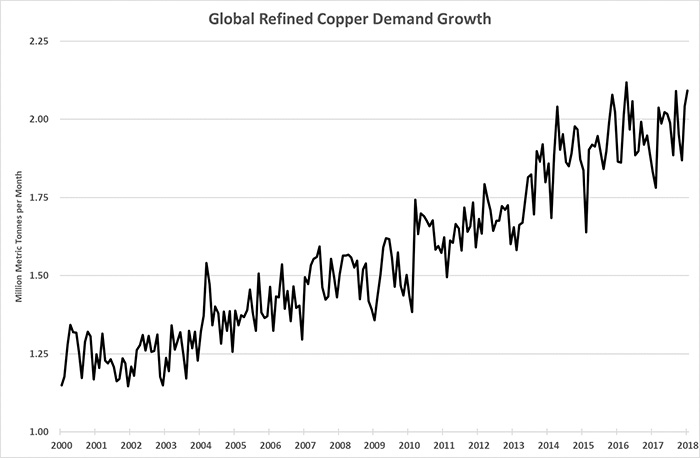 As you can see, the trend works out to about 3.4% annual growth in copper demand. That’s setting up a huge problem for the copper market in the next 10 years.

According to a mining analyst with CRU, around 220 mines — about 40% of the world’s current copper production — will close over the next 10 to 20 years. In addition, mines that continue to produce will do so with lower grades — less metal per ton of rock moved.

Mines can only produce so much material in a year. If the rock has less copper, then the supply will fall. That’s happening at BHP Billiton and Rio Tinto’s giant Escondida mine. After a $7.6 billion upgrade in 2015, the output fell by 200,000 metric tons per year.

In other words, demand is going up, and supply is struggling to keep up. They will diverge soon. While demand growth is 3.4% per year, supply growth will struggle to hit 1% per year.

While some substitution will occur (we can substitute metals like aluminum in place of copper in some cases), the price escalation is coming.

Real Wealth Strategist readers are prepared. We own a suite of high-quality copper miners, and we will be adding new names to that list over the next year. If you haven’t done the same, you absolutely should start now.

The bull market is rolling, and you can profit from it today.