Italy Pushes Europe to the Brink of Another Financial Crisis

A financial firm fails and threatens an important economic sector. The government steps in. Instead of directly bailing out shareholders, regulators sell assets with value to a competitor, and taxpayers cover losses on bad assets.

It’s the story of Bear Stearns and other major financial firms around the world in 2008. It’s also the story that’s unfolding in Italy right now.

Italian regulators bailed out Veneto Banca and Banca Popolare di Vicenza to avoid a crisis in its industrial heartland in the northeast region of the country.

This is Italy’s second major bailout within six months. At the end of last year, the country announced a rescue of the world’s oldest bank, Monte dei Paschi di Siena. That deal was completed last week, days before the second bailout was announced.

You might think stocks would drop on all the bad news. But that’s not what happened. Investors like to pretend problems don’t exist until they become too large to ignore. This was true in 2008 when multiple financial firms failed before the market crashed. It’s true now in Italy.

Investors are ignoring the risks, which has pushed the country’s benchmark stock market index into bubble territory. This is shown in the chart below. 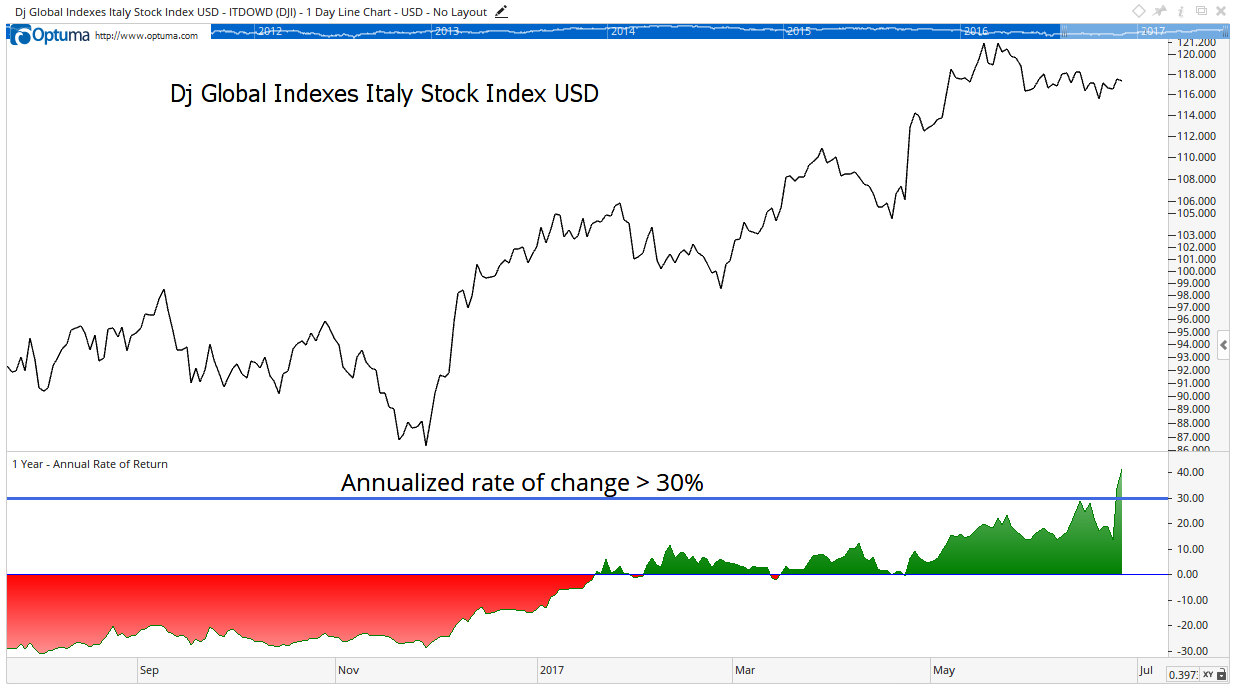 Of course, we can’t tell for sure that we’re in a bubble until after it pops. But from studying past bubbles, I found that when the annualized rate of change exceeds 30%, it’s time to expect a sell-off. Well, as the chart shows, it’s time to look for a sell-off in Italy.

But there are problems beyond the borders of Italy.

Greece avoided defaulting on its debt next month because the euro zone agreed to give the country enough money to meet its obligations. That’s like taking a cash advance on one credit card to make the minimum payment on another.

Benchmark stock market indexes in Greece and Spain are also in bubble territory, with their annualized rate of change now topping 30%. The FTSE Eurotop 100 Index, a benchmark for the continent, is also flashing that same warning sign.

It is possible there are no problems below the surface of the European banking system. But those large bank failures are warning that all is not well. We know that it’s likely there are problems. The question is whether the stock market can shrug them off and continue higher.

The market has shrugged and rallied quite a few times in the past few years. But there will come a day when the stock market falls and a bear market begins. A crumbling financial system tells us the next global bear market could start in Europe.