Home » Economy » Global Economy » Is the Trump Rally Over?

There has been a lot of talk lately about the U.S. markets underperforming.

And that has been true.

Stocks soared after the U.S. election, but that pace of growth has slowed during 2017. Meanwhile, the rest of the world, as measured by the MSCI EAFE Index, is up significantly, making the U.S. a laggard on a global scale.

So is the Trump rally over, or is there another run higher?

Let’s take a look at a chart.

Below you will see the relative strength chart of the S&P 500 versus the EAFE. Basically, when the line is rising, the S&P 500 is outperforming, and when it’s falling, the S&P is underperforming. 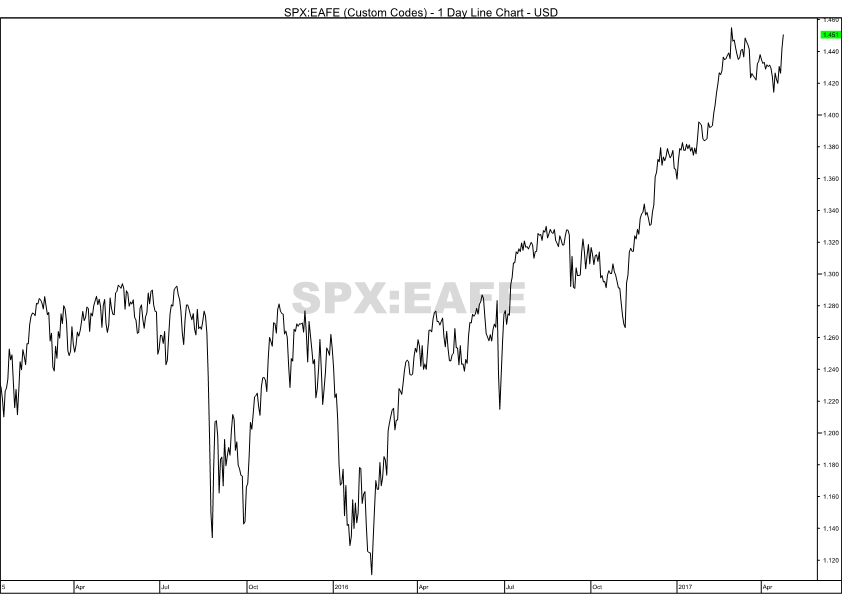 You can see the outperformance the U.S. markets experienced since the election. Then the decline in 2017 represents the underperformance everyone was talking about.

As you can see from this chart, there are periods of brief underperformance, but in general, the S&P 500 is leading, and the breakout since the election likely has a lot more room to run.

For now, it’s best to take the underperformance as an opportunity to buy U.S. stocks, not sell.