In 2010, a wave of greed ripped through the mining investment community.

Rare earth elements (REEs), which include such odd ducks as yttrium, scandium and gadolinium, are metals with special properties that are critical for modern technology such as LED lights, petroleum catalysts, cellphones, computers and defense technology.

China controlled the world’s supply of these critical metals. In 2009, China produced 95% of the world’s supply, about 120,000 metric tons. They owned the giant Bayan Obo deposit, and they bought up several other critical deposits in Australia.

In 2010, the U.S. Geological Survey concluded that the entire U.S. supply was just 13 million metric tons … about 13% of the world’s reserves. China held nearly three times as much.  A wave of fear swept developed nations such as Japan, the U.S. and members of the European Union.

The fear, as touted on many investor news websites, was that China would cut off exports of critical REEs such as neodymium, which is used in the magnets of wind turbines and electric cars.

What happened was classic investment mania: Every stock tout in the business began crowing about the coming REE boom. REE junior mining stocks popped up like mushrooms after a rain … and investors crowded in.

The best example of this was Molycorp. It went public in the summer of 2010 to great fanfare, and shares closed the first day at $14 each. The chart below shows the whole story: 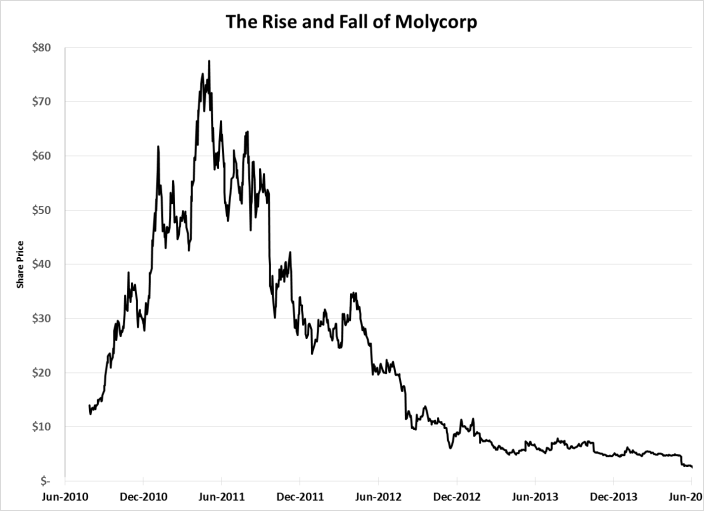 As you can see, shares of Molycorp went from $14 to $77.50 in less than a year. That’s a 454% gain in just 10 months. Everyone knew the story. People who had never, ever owned a mining stock wanted to own Molycorp. It was a classic mania.

At one point, Molycorp was worth more than the entire REE market. In the end, the REE craze ended as you would expect … it crashed and burned.

Molycorp shares fell almost as fast as they rose, hitting $6 per share by November 2012. That’s a 92% fall in one year. Molycorp shares continued to decline. Two years later, they fell below $1 per share.

Rick Rule, president and CEO of Sprott U.S. Holdings, referred to REEs as “story-um, fraud-ium and scam-ium” because many unwitting investors bought into the idea — and lost a lot of money.

However great the story was, the fact of the matter is that the world only used 126,230 metric tons of REEs per year. The market was tiny. To put that in perspective, the world produces over three times that much lead … per month.

I kept my readers out of that market. I remained skeptical because the mines that touted REEs had zero income. All they had was land with dubious sightings of these elements. Back then, the risks were obvious to me … a tiny market, zero production to invest in and way too much speculation. It looked risky to me, so we didn’t get involved.

The Next Precious Metals Bull Market Is Going on Now

Cobalt Soared 70% – The Metal to Invest in Now