How to Use the Straddle Strategy When Trading Stocks

Volatility has returned to the market in a big way in the last two months.

The S&P 500 has waffled back and forth, and has crossed above or below its 50-day moving average seven times since the beginning of February.

In all of 2017, there were only nine such crossings.

Investors seemed to forget that the market moves in both directions. But the 11.7% drop in two weeks got their attention.

And just when it looked like the market was tanking on February 9, it made a big reversal and jumped 9.8% in just over a month. And now it has fallen again.

This seesaw action may have created opportunities for some investors, but it probably caused headaches for others.

With no clear pattern to work with, one-way bets on the market become more difficult.

But what if there was a strategy that could take advantage of the volatility? Would that be of interest to you?

What if the direction didn’t even matter … all you needed was the stock to move?

One options strategy that can make money when volatility increases is called a straddle.

The strategy involves buying a put and a call at the same strike price, and then waiting for the stock to move. And you want it to move sharply.

Let me give you an example. 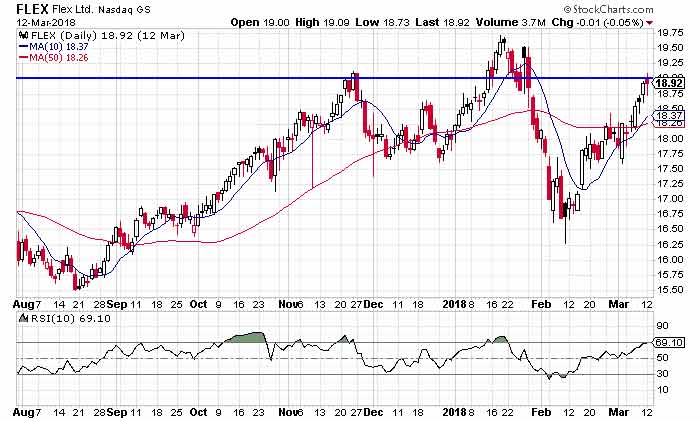 With some uncertainty about which direction the stock might move, I decided a straddle was the right way to go. The April 19 strike options made the most sense. They were at the money, and they weren’t going to expire for approximately five weeks.

For this strategy I had a target of a 50% gain, and that meant the combined value of the options had to get to $1.635.

Because the one side is going to be losing value while the other one is gaining value, it is realistic for the total value of the straddle to be provided by the one side.

I didn’t really care which target got hit. As long as one of them got hit, I was looking at a gain of 50%. 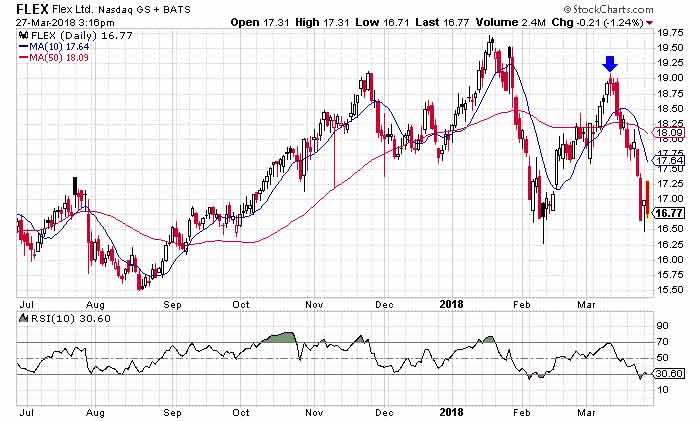 The arrow marks March 13, which is when I was looking to execute this trade. We see on the chart how Flex has experienced big swings in the last three months. Obviously the big swings in the market have affected it too.

But this is the exact type of stock you want to use to trade straddles. One that can swing 10% to 15% in a short period. With this straddle, I needed the stock to drop 8.2% or gain 9%.

Flex had four moves between 11.5% and 15% in a three-month period. This told me that looking for the 8% to 9% move was certainly a reasonable expectation.

Obviously, using a straddle on some stocks wouldn’t be a good idea.

As I mentioned before, you want volatile stocks when trading straddles. You are looking for sharp moves in one direction or the other. The worst thing that can happen when you are holding a straddle is to have the stock move sideways.

Range-bound stocks would not be good targets for using a straddle strategy.

The second thing you want is reasonably priced options. In the case of Flex, the premiums for the options were very reasonable compared to its recent moves.

That seems like an unreasonable expectation, especially based on the previous moves for Flex.

So if you are going to use straddles during periods of higher volatility, make sure you choose stocks that move. And make sure that the options are priced so that it makes sense to use a straddle.

Ask yourself, does the needed gain or loss fall within the past moves?