Do you remember where you were on June 7? What you were doing? Reading?

If you’re reading this now, the odds are good that you are a well-read investor. Not because you are reading my articles, per se — though, thank you for reading! — but because you have diversified your investing information’s sources.

By doing so, you’ve ended up at BanyanHill.com, where my colleagues and I offer up a treasure trove of advice on investing and asset protection. If, by chance, you were reading Banyan Hill articles on June 7, you would have run across a very lucrative investment opportunity.

Three months ago, I delved into the prospects of the underloved construction sector. The construction market had just received a shot in the arm. A rhetoric battle had broken out on Capitol Hill between Republicans and Democrats over who could spend more to rebuild America’s dangerously neglected infrastructure.

One of the winners of this brewing spending war would be Caterpillar Inc. (NYSE: CAT). Like wars with words do in Washington, no government spending ever materialized. But that didn’t stop private companies from picking up some of the slack in construction spending, especially in overseas markets like China.

As a result, Caterpillar stock went on to gain nearly 20% since I highlighted its investment potential back in June … and the shares aren’t done yet, not by a long shot…

According to a recent UBS survey, 2018 is primed to bring a “re-acceleration of U.S. private construction activity.” Who needs government spending when the private sector is already in a boom market? What’s more, when quite a bit of that construction is going to take place stateside?

Per data from the St. Louis Federal Reserve, more houses are going to be built this year than any year in the past decade. If you follow my colleague Matt Badiali, you’re already aware that the timber industry is primed to take off from this added construction. But the construction boom will also benefit companies like Caterpillar.

In that same UBS survey I mentioned above, 60% of the mining companies surveyed said they intend to spend more next year for new mining equipment. “UBS equipment rental surveys remain positive for business conditions and pricing,” UBS noted.

That speaks volumes for Caterpillar’s bottom line, and it’s why UBS lifted its earnings and revenue outlooks for the company through 2018.

And it’s more than just housing and domestic construction that’s driving mining companies to spend more. There is a massive movement in the automotive market right now toward electric cars, and lithium batteries are the industry standard for storing power. Tesla Inc. (Nasdaq: TSLA) even built a Gigafactory just to meet demand for its own production.

As a result, there’s a huge market demand for lithium right now. And while lithium isn’t all that rare, someone needs to mine it … and to do so, they need equipment. Caterpillar is already waiting in the wings to provide that equipment.

With Caterpillar stock already up roughly 20% since my article in June, and up more than 30% year-to-date, you might be tempted to take profits. If that’s your investing style, or your risk tolerance level, I’m not going to tell you otherwise. But I would strongly suggest only taking a portion of your investment off the table, and leaving the rest to grow.

Even though CAT stock is trading at all-time highs, it has a lot more room to run. Caterpillar’s technical backdrop is solid. The shares remain well above support at their 20- and 50-day moving averages, and short-term technical support should emerge in the $120 to $122 region over the next month. 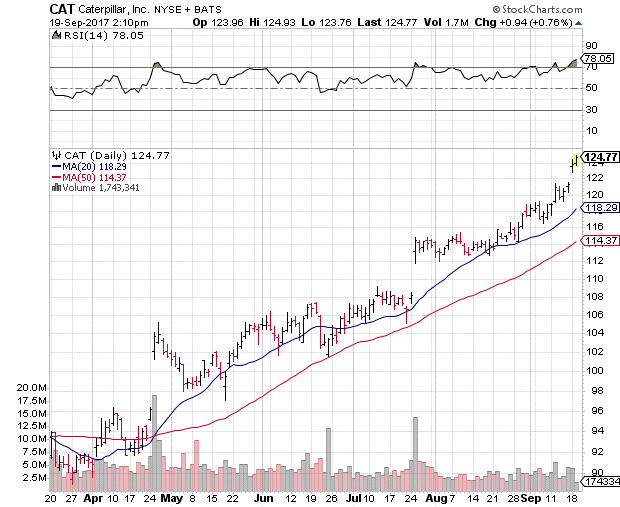 That said, as you can see from the chart, CAT stock is trading in overbought territory right now. The stock’s 14-day Relative Strength Index is nearing 80, meaning that buyers are getting strained. The current situation indicates a near-term period of consolidation, likely into the $120 to $122 region.

This period of consolidation will look a lot like late July/early August for CAT stock. But don’t bail on the shares at this point. Such a consolidation will be a buying opportunity for those who missed out back in June. I’m targeting the $140 to $150 area for CAT once this mining and construction boom finally takes hold.

Editor’s Note: If you’re ready to learn the tried-and-true secrets from an elite gathering of the best minds in finance, you can’t afford to miss out on Banyan Hill’s Total Wealth Symposium. That’s why we’re giving you access to our most exclusive event of the year, all from the comfort of your living room. To find out how you can watch the event live on your computer or tablet, click here.

Cybersecurity: The Next Big-Money Merger Game?

This Classic Brand Is Making a Huge Comeback