Home » Investment Opportunities » Make a 50% Gain on This Trendy IPO

Make a 50% Gain on This Trendy IPO

I learned a hard lesson about collecting a few weeks ago.

It’s a lesson that spawned from my childhood. Like all boys growing up, I was fascinated with baseball. Initially, I followed my hometown heroes, the Cincinnati Reds, but as I fell more in love with the sport, more teams were added to the list. By the end, my all-time favorite team was the Oakland Athletics.

As a way to follow the players I liked best, a few of my relatives introduced me to baseball cards. Not only could I collect cards of my favorite players, but I could also make money on those cards when I got older. Baseball cards tend to go up in value, my relatives told me. Hold on to them until you get older, and you’ll be set.

It was a dream come true to find out that a hobby I loved could eventually pay off big down the road. I would go on to collect binders filled with cards picturing Reds outfielders Eric Davis and Ken Griffey Jr., as well as my favorite A’s players, Mark McGwire, Jose Canseco and Rickey Henderson…

Those of you familiar with baseball and card collecting already know where this is going. Not only was the McGwire/Canseco era plagued with doping scandals, which ultimately undermined card value, it was also a period during which companies like Topps, Donruss, Fleer and Upper Deck printed massive amounts of cards.

While I was aware of the baseball doping scandals, I hadn’t a clue about the massive card printing issue until a few weeks ago. Having abandoned card collecting in the late 1990s — I literally stuck the things in a shoebox at the back of my closet — I naively took my cards to a local shop to finally cash in on a few of those cards.

The shop owner wouldn’t even look at them. “They just left the card printing presses running in the ‘90s,” he told me. “Nothing I can do. Maybe in another 10 years when everyone has thrown them away?”

The Fun in Funko

If you’re not familiar with Funko, the company makes collectable toys, including a popular line of Pop! plastic figurines. These collectibles feature pop culture icons … like characters from Star Wars, The Walking Dead and Marvel, among many, many others.

The key business strategy for Funko is to identify a pop culture trend, license the character rights, and start producing figurines and collectibles before the trend dies. So far, the company has been relatively successful.

In the third quarter last year, Funko raked in roughly $112 million in sales. Growth was solid enough that Funko decided to go public to raise additional funds and pay down debt. FNKO stock had its initial public offering (IPO) at $12 per share amid a respectable amount of fanfare. However, FNKO would ultimately plunge 41% on its first day of trading on the New York Stock Exchange.

Lackluster IPOs are not a new thing for 2017. In fact, there were only a handful of real successes. But Funko is far from a failed IPO just yet.

On Tuesday this week, Funko released its first quarterly earnings report as a publicly traded company. While net income fell to $8.3 million from $17.2 million last year due to rising expenses related to debt and the company’s $4 million acquisition of a U.K. animation studio, sales jumped 21% year over year to $142.8 million.

But those financial hurdles should diminish going forward. Funko plans to use its IPO cash to pay down debt and finalize the acquisition of the animation studio, which it has rebranded as Funko Animation Studios.

Furthermore, Funko’s third-quarter performance has attracted analysts’ attention. Bank of America Merrill Lynch just issued a “buy” rating and a $12 price target for FNKO stock, noting that sales came in above forecasts and that the Toys R Us bankruptcy has cast an unwarranted negative shadow over Funko.

Having learned my lessons on pop culture collectibles the hard way — I’m looking at you, Ken Griffey Jr. — I’m leery of investing in Funko right now. The shares have shown considerable volatility, surging more than 20% following their third-quarter earnings report, only to come plunging back to earth shortly thereafter.

Still, the shares are showing some price support near their emerging 20-day moving average. This is especially encouraging given that FNKO only IPO’d on November 1. 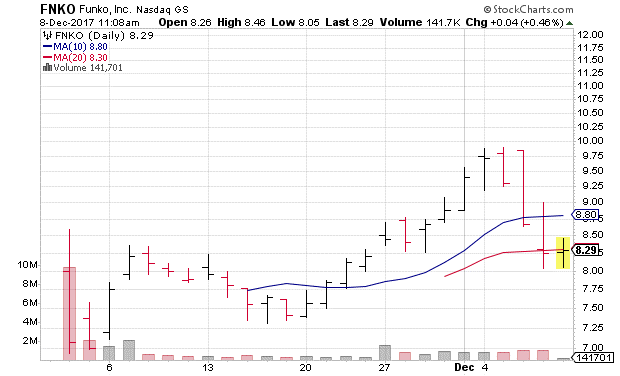 The problem is that volatility is going to stick with FNKO stock until the company can provide a solid history of meeting or beating Wall Street’s fundamental expectations. That’s going to take time. It is also going to mean continuing to capitalize on emerging pop culture trends in a timely fashion.

If you’ve got the stomach for a bit of risk, FNKO stock may never trade this low again if it can continue to show double-digit year-over-year growth. Personally, however, I would like to see the shares sustain support above their 10- and 20-day moving averages before finally investing — and right now that means a sustained trend above support near $9 per share.

Editor’s Note: As a retired science teacher from a small Midwestern town, Larry Lysted lived on a modest retirement income and had learned to keep his wants at bay. In fact, the biggest luxury Larry saw since he started retirement was the addition of a two-car garage on his home. But everything changed when Larry stumbled upon a version of a “freedom check” … and now he collects an incredible $83,000 each and every month! To start getting your own freedom checks, you must stake your claim immediately. Click here now to find out how.

The Stock Price of Amazon is Too High – A Buying Opportunity