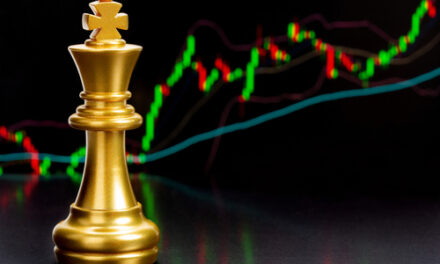 On Tuesday, Avis Budget Group (CAR) surged more than 100% in a single day…Bed Bath and Beyond (BBBY) jumped more than 50%.GameStop (GME) is still trading around $200 a share — 1,500% from where it was 12 months ago.Just when you thought the meme stock trade was over, here we go again…And you know what?I’ve missed out on all of these.And I’m not too proud to say I feel the fear of missing out (FOMO).It’s hard not to have FOMO when you see stocks rally like this.But you have to remember there’s only one thing traders are banking on to profit from price moves like this…Short squeezes on garbage stocks.

Short Squeezes Are Not an Investment Strategy

There’s no sugarcoating it…Right now, traders are buying garbage stocks hoping they see a massive short squeeze play out, reminiscent of the GameStop trade from 2020.Just think about it…All three of the companies I mentioned above were on the verge of bankruptcy before we had a pandemic.Yet their stocks now trade at all-time highs… or have recently hit all-time highs and are still climbing.My point is this: If you let FOMO guide your trades, you’ll end up chasing all these garbage stocks. You may get lucky and buy one that doubles overnight. But you’re far more likely to buy the ones that ultimately go bankrupt.It’s a tricky game I prefer not to play. Not much better than playing roulette with the stock market.If it hits, you can win big. But there’s a whole board of picks that will not pay out anywhere near what you think.I don’t want to outright say you should never do this. As long as you understand the risks and don’t bet too much, it can be fun. And you can possibly make some money along the way.For example, I covered two meme stocks at the end of September using my Bank It or Tank It analysis — Clean Energy Fuels Corp. (CLNE) and Palantir Technologies (PLTR).Both are still heading in the right direction — CLNE is up over 17% and PLTR is up almost 8% since my video. And they remain on my Bank It list.But not because I’m chasing them for a potential short squeeze.In that video, I used technical analysis to spot some bullish setups, and see if we could get in before a big move.And if this meme stock craze continues, CLNE and PLTR are both set up nicely for further gains.Earnings for Clean Energy are coming up after the close today — a potential catalyst to lift shares higher. And for Palantir, earnings are due next Tuesday.But, for today, I have a brand-new way for you to play the current market environment…

Robinhood Markets (HOOD).Yes, the controversial trading platform has fallen out of favor with investors. The stock is below its IPO price and had plunged over 50% from a peak above $80 per share back in August.Part of that was the idea that the retail trading frenzy was over. That meme stocks were all coming back to earth and if you missed the first wave, you missed out.That would mean their target market of retail traders would sit on the sidelines and not put new money to work.But the recent surges we’ve seen this week show us that this trading environment is far from over.And that means there’s an opportunity for Robinhood shares to bounce higher over the next couple of months.You can use an option expiring early next year with a slightly out-of-the-money strike to capitalize on a potential rebound rally for the stock, as retail trading remains in full swing.Regards,

Chart of the Day:Remember This? 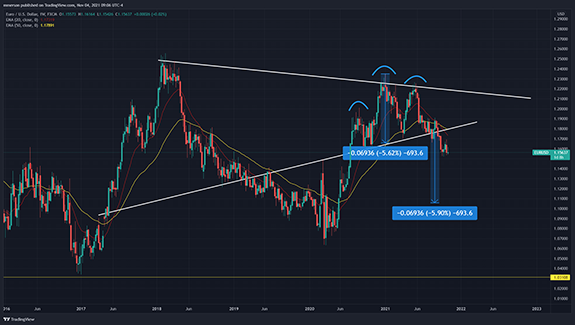 In one of my first-ever Charts of the Day, I tipped you off to the head-and-shoulders pattern forming in EUR/USD, the euro against the U.S. dollar.It took a while to play out, but the pair has quite definitively fallen below the neckline of the pattern. I expect we’ll see it fall even further in the months ahead, down to my target at around 1.105.Keep in mind, this breakdown is occurring as the Fed announced it would taper back its bond purchases, and the market responded favorably.What does this mean, exactly?Well, let me be the first to say I’m no expert on forex and currency pairs.But I do know a head-and-shoulders pattern when I see one.And this chart tells me the dollar has the euro’s weight off its shoulders. The dollar should act strong as the pattern plays out.Now, I initially thought a strong dollar could weigh on equities and crypto-assets in the latter half of this year, but today I think otherwise. A strong dollar should only buoy investment in U.S. markets, and by extension crypto, which the U.S. is a major player in.Regards,

Your Cheat Sheet for Finding the Market Crushers