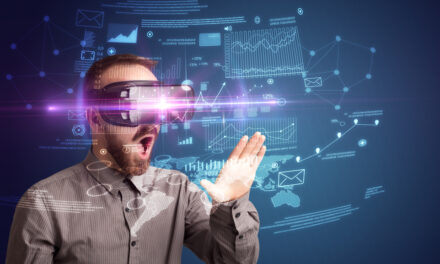 Last week, one of my colleagues circulated an article that argued the current economic situation is deflationary … in other words, prices will get lower over time.

This colleague, who isn’t an economist, found it difficult to understand how anyone could argue that.

“The Federal Reserve is creating trillions of dollars,” he said, “which surely should result in hyperinflation.”

After all, that’s what happened in Weimar Germany, Venezuela and Zimbabwe when they printed too much money.

It should be easy to explain why my colleague is wrong … but it isn’t. That’s because so much of what we believe about the economy is based on ideology rather than analysis of the real world.

The ideological bias against monetary inflation emerged in the 1960s. University of Chicago Economist Milton Friedman famously argued that the Federal Reserve should combat inflation by limiting money supply. In his view, inflation was always due to an excessive supply of currency.

The last decade proves he was wrong about that. But for decades, the self-interest of the financial sector kept fear of inflation alive.

See, if your business is lending money to other people in return for interest payments, you want inflation to be as low as possible. Otherwise, the purchasing power of what people owe you erodes. That’s a powerful incentive to stoke inflation fears.

That’s because it does create inflation … just not in the real world of economic activity.

And as I’ll explain here, understanding that is the key to protecting your gains in the stock market.

Deutsche Bank Securities Chief International Economist Torsten Slok indirectly touched on this issue — and on my colleague’s concern about missing consumer inflation — in a note to clients last week:

“You can increase the Fed balance sheet and the money supply as much as you want. If the money goes into asset transactions rather than GDP transactions it will not be inflationary.”

Slok is absolutely right … and I’m mystified why more people don’t get his point.

There are several types of inflation. Consumer inflation is just one of them.

The U.S. economy has had excess capacity for over a decade in the form of un- and underemployed workers. And of course, the economy is hardly at full capacity right now. Gross domestic product dropped by 5% in the first quarter and is expected to drop by around 20% year on year in the second quarter.

That begs the question of whether there’s too much money in the economy.

In his note, Slok wrote that the velocity of money in the U.S. economy was slowing dramatically. (Money velocity is simply the number of times a dollar is used to buy goods and services in a given period.) 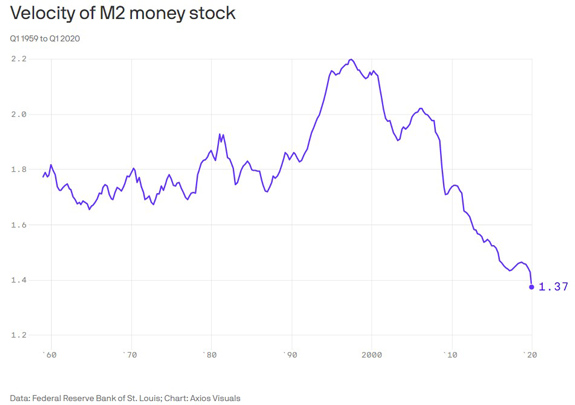 As you can see from the chart, after a spike in the 1990s, the velocity of money in the U.S. economy began to decline rapidly after the 2008 financial crisis.

Economic growth over the last decade has been slow, but not so slow that we would expect to see such a huge decline in the use of the nation’s money supply.

So that leaves only one other possible reason why the velocity of money has decreased so much: There’s a lot more money in the economy … but it’s not in the part of the economy where people buy and sell real goods and services.

So where did all the Fed’s money go, if not into the economy?

The M3 measure of money supply, on the other hand, adds-in the Fed’s balance sheet, bank reserves at the Fed, institutional money market funds and liquid instruments like Treasury bills. It’s about four times bigger than M2 — $15.5 trillion versus $4.2 trillion.

The Fed creates liquidity by buying Treasury bills from commercial banks in exchange for an increase in their reserves. When this happens, the amount is added to M3.

The banks can use those reserves to make loans to households and businesses, to stimulate economic activity, in which case those loans are added to M2.

Or the banks can choose to use their reserves to invest in paper assets, like stocks.

Since the financial crisis, the bulk of new money “created” by the Fed’s liquidity activity has gone into M3 — where it chases paper assets — not M2, where it would contribute to the real economy.

That’s precisely why the hyperinflation people like my colleague have been looking for hasn’t shown up in the real economy. Everyone is looking in the wrong place. Hyperinflation is right in front of you … in the stock market! It’s why price-to-earnings (P/E) ratios have soared over the last decade:

Real Money (Yours) in a Virtual Stock Market

Thanks to a combination of the Fed’s money printing and lackluster economic growth, the U.S. stock market has experienced significant inflation over the last decade: asset price inflation.

Whenever the Fed creates more money, the banks who are first in line for it plow it back into asset markets. There, asset price inflation will produce gains, instead of in the sluggish real economy where returns are poor.

But remember, inflation is just a change in numbers. It doesn’t represent an increase in actual economic value.

That’s why to me, the stock market in 2020 is like a video game. It’s full of action and excitement … and it generates big scores … but it doesn’t represent anything real. It’s just a bunch of numbers disconnected from reality. Those numbers are driven by Fed-induced asset price hyperinflation, not by a healthy real economy.

Sure, it’s entirely possible to make money on individual stocks. But eventually, the Fed’s hyperinflationary policies are going to push the stock market so far away from reality that it’ll have to come crashing down again. Stock prices will have to deflate back to valuations that match the real world.

When it does, you want to be sure your real money doesn’t go down with it. 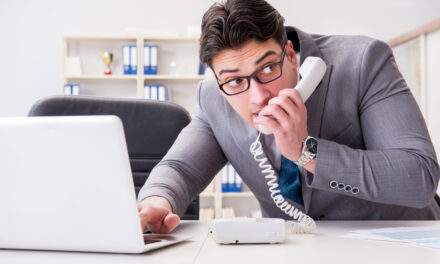